Naval Postgraduate School’s Summer Grad Class One of the Largest

Naval Postgraduate School’s Summer Grad Class One of the Largest 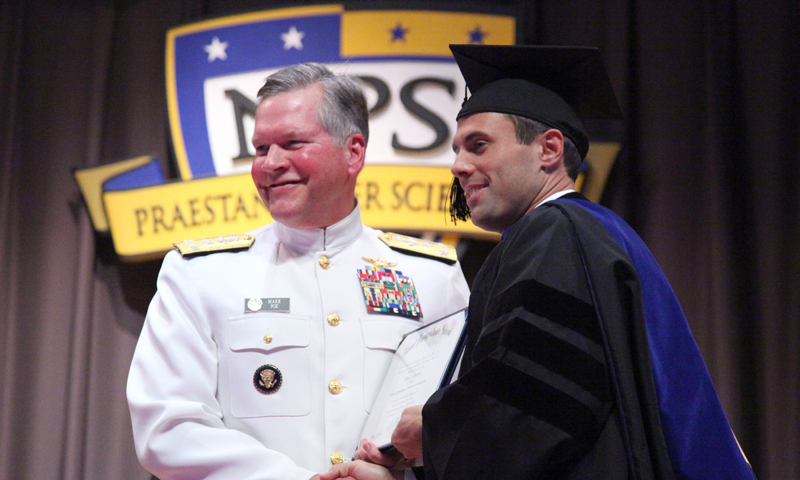 When Naval Postgraduate School (NPS) President Dan Oliver welcomed the summer graduation class to commencement ceremonies, Sept. 21, he was greeting one of the largest classes in recent history. More than 400 students earned their advanced degrees this past quarter, including nine doctoral graduates – more than any quarter in the school’s recent history.

The ceremony’s keynote speaker offered another unique aspect to the class ... Vice Adm. Mark I. Fox, Deputy Chief of Naval Operations for Operations, Plans and Strategy (N3/N5), was not only the ceremony's premier speaker, he was also a proud parent with his own son, Lt. Collin R. Fox, a member of this quarter’s graduating class completing a master's degree in system analysis.

"I'm delighted to speak at the Naval Postgraduate School graduation ceremony … I had originally planned to attend the event only as a proud dad, but the opportunity to address the graduates – including one of my sons – of such a prestigious academic institution is a real honor. I completed the Aviation Safety Officer's course at NPS in 1986, and appreciate the enduring partnership between the Navy and the local community. It’s always a treat to spend time on the Central California coast."

Fox began his formal remarks noting that commencement marked the culmination of one phase of many lives, and the “beginning of a new and exciting phase filled with hope and anticipation” for the future alumni.

“First and foremost, congratulations to the graduates,” he said. “It is appropriate that we pause to recognize your excellence, your discipline and your accomplishment.”

He continued, citing his own envy of the graduating class and his desires to attend the institution he has so much respect for as a junior officer.

Recounting the memorial service for astronaut Neil Armstrong at the National Cathedral in Washington, D.C., the previous week, he remarked that it brought back a lot of memories from his youth, as well as a more recent personal memory of when he and his wife hosted Armstrong, Jim Lovell and fellow NPS graduate Eugene Cernan in Bahrain while commanding the U.S. 5th Fleet. He noted that they were remarkable and patriotic, but widely unassuming seeing their own accomplishments not as their own, but on behalf of the nation as a whole.

He recounted the remarkable levels of change that society has seen over the past several decades, but emphasized that advanced education provides the intellectual fuel for that evolution.

“We have seen the greatest increase in prosperity in human history in our lives, how has this happened?” he posed. “Good work in hard science and engineering … tremendous growth in the analog to digital age and information technologies have come along. But the real driver, I would submit, has been the movement of goods and services around the globe,” he commented, with institutions like NPS “representing the brain.”

He focused on the global commons, and the important roles of collaboration in protecting this critical driver of human prosperity.

“There are people who wish us ill. There are terrorists, pirates, state actors who would choose to disrupt us,” he noted. “Over 30 nations have come together as we speak, in the largest international mine countermeasures exercise which is going on in the 5th Fleet and NAVCENT area of responsibility, to demonstrate the ability to do strictly defensive operations, to demonstrate that we can clear mines and work together and offer a deterrent to aggressive behavior.”

Fox continued by connecting these current challenges of the global commons of the sea to the commons of today, and tomorrow. Outer space, cyberspace … while there are no owners of these ‘commons,’ they are absolutely critical to society’s continued advancements, he said, and collaboration will continue to be a key in resolving the complex issues of these domains.

“We will not do things by ourselves in the future. We will work with partners, people who share our values, and work together to accomplish great things,” he said.

“I appreciate the opportunity to see teamwork and partnership being formed here with the international students. It would not surprise me to learn that there are future leaders here today that will take their positions around the world and work this incredibly complicated and challenging world that we live in founded on a relationship that began in Monterey. Character and integrity are gardens in our lives that must be tended to every day. We are ultimately defined by our courage, character, and integrity,” he expressed.

A total of 410 students graduated earning 419 degrees this past quarter, including nine Ph.D.s, one mechanical engineer and 47 international students.