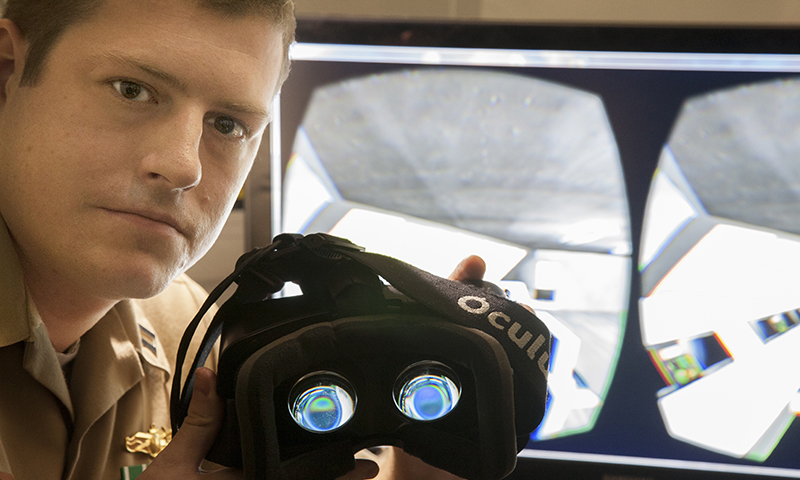 NPS computer science graduate Lt. Brendan Geoghegan demonstrates the Oculus Rift Virtual Reality (VR) head-mounted display he used as a tool to determine the viability of a novel operational view of the bridge onboard U.S. Navy warships. Geoghegan’s efforts during his time as a student were awarded the top prize in the SECNAV Innovation Awards in the Innovation Scholar (Professional Military Education) Category.

When the winners of the Secretary of the Navy Innovation Awards were announced, Feb. 8, the Naval Postgraduate School (NPS) was well represented among the honorees. NPS alumnus Lt. Brendan Geoghegan was named winner of the Innovation Scholar (Professional Military Education) Category for his thesis research while a student on campus. Similarly, Lt. Clay Greunke received an honorable mention for his student thesis, and members of university’s Advanced Robotics Systems Engineering Laboratory (ARSENL) were recognized with an honorable mention.

The Secretary of the Navy Innovation Awards were established by SECNAV Ray Mabus to recognize leading innovators within the Department of the Navy (DON) and to incentivize innovation across DON.

“Across the Department of the Navy, our talented Sailors, Marines and civilians are continually creating innovative solutions to our most complex problems. I want to recognize the top naval innovators in our workforce today and inspire future innovators to continue developing their bold ideas for the future,” Mabus said when he announced the program.

Geoghegan was honored for his work leading to an NPS thesis titled, "Navigational Heads-Up Display: Will a Shipboard Augmented Electronic Navigation System Sink or Swim?" In it, he utilized Oculus Rift Virtual Reality (VR) head-mounted displays to explore the viability of augmenting a conning officer's visual field with an overlay of Critical Navigational Information (CNI).

“I was very excited to have been nominated for the award. To be selected for it by the SECNAV team is above and beyond. It was a great project to work on and hopefully the excitement of utilizing AR [augmented reality] and VR [virtual reality] in the military domain does not fade away,” said Geoghegan.

“Never in my wildest dreams did I imagine that both of my students would be recognized like this,” said Sadagic.

“Lt. Geoghegan’s innovative use of concepts of Augmented Reality technology allowed him to conduct research that would have otherwise been nearly impossible. He also leveraged elements of commercial-off-the-shelf virtual reality products to conduct rapid prototyping and test real-world operational concepts.

“The amount of effort needed to design and develop the simulation, and to design and execute studies with human subjects, would typically be supported by two students who would then complete a joint master thesis,” said Sadagic.

In another twist, Sadagic pointed out that it was Geoghegan that recommended Gruenke be considered for the SECNAV Innovation Award. 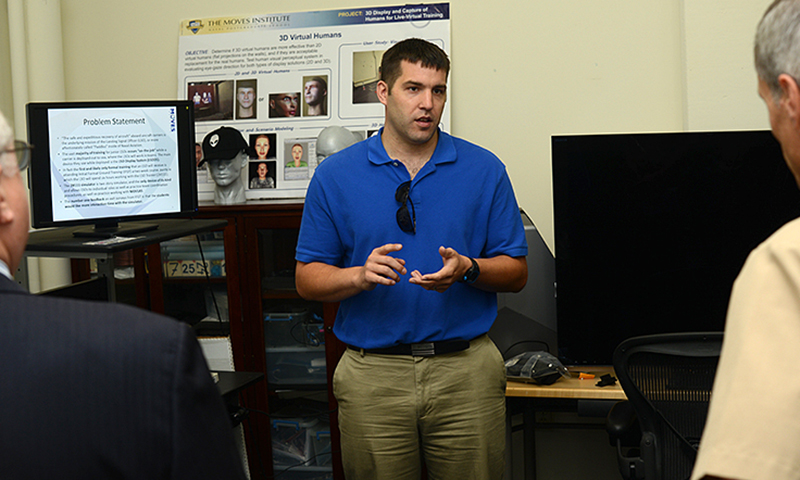 “He did not think about the chance that his own award would be diminished, he was rather selfless,” said Sadagic.

Greunke received an honorable mention in the same category as Geoghegan, and his work will be featured at a meeting of the Institute of Electrical and Electronics Engineers (IEEE) later this year. His work on light-weight, virtual reality trainers has implications in the training of inexperienced Landing Signal Officers (LSO), deploying to aircraft carriers for the first time.

“The first time you go to the aircraft carrier, you have no idea what's going on. Planes are going by, people are screaming, people are running across the flight deck … You don't know what to cross, when to cross, what you can and can't do, you are just holding on to the person who's leading you with dear life so you don't get hit,” said Greunke.

It was that chaotic environment that led Greunke to think about different ways to prepare LSOs for the flight deck.

“Before they actually see the landing platform themselves, they can at least experience some sort of cognizance of what is going on in this circus of the carrier environment. Once you have that higher cognizance, maybe you are able to see something that doesn't look right and point it out to one of the other LSOs,” said Greunke.

“His research helped advance our understanding of the process through which we engage, design and develop non-traditional training solutions that employ a series of low-cost components and software systems,” added Sadagic. “His work demonstrated that certain training capabilities, traditionally supported by complex training environments like large simulators, could be accomplished by using vastly cheaper and more flexible resources and methods.”

“It is a distinct honor and privilege for my team to be recognized by the SECNAV for its innovative efforts. I believe this honorable mention speaks to the caliber, commitment, and character of each of the ARSENL team members, bringing together their own innovative talents and diverse backgrounds synergistically,” said Chung.

Chung’s research into UAV swarms garnered attention last year when he broke a record for flying 50 autonomous UAVs at Camp Roberts, Calif. In the past, each aircraft would have been operated by a single person. But, Chung’s UAVs can make limited decisions freeing up operators for other tasks. In fact, during ARSENL’s recent record-breaking performance at Camp Roberts, two operators were able to manage 50 aircraft simultaneously.

“This project came from the notion that quantity is a quality. It’s like trying to play a game of tennis against an entire 5th grade class. If they were are all lobbing tennis balls across the court, it would be very hard to defend against them,” explained Chung.

The Secretary of the Navy Innovation Awards are part of a broader initiative that aims to spur innovation throughout the service through recognition. The awards target innovation in categories ranging from robotics and autonomous systems to thinking “outside the box.” Commands throughout the DON are encouraged to nominate exceptional innovators at the Innovation Awards portal at (http://www.secnav.navy.mil/innovation).