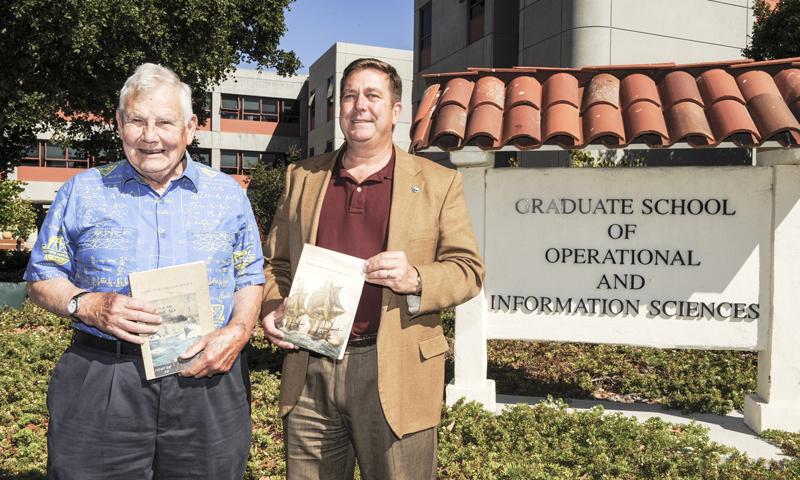 “People who write in this journal are from all over the country and from all kinds of institutions … Their common interest is some type of maritime operations or warfare,” said Kline. “There’s a uniqueness of Wayne winning first and second prize in a very respected international journal—probably unprecedented,” he added.

The Nott Prize was established in the early ‘80s, recognizing the three top articles published in the Review through the calendar year, with the exception of the Miller Prize award-winner given to the top historical piece through the same period.

Kline and Hughes’ co-authored article focused on the strained relationship with China, and how to go about containing and deterring any major conflict.

“I think you can say that within the last few years, China has been bullying her neighbors,” said Hughes. “The Japanese, Indonesians, Vietnamese, and Philippines are being threatened. China is illegally claiming ownership of the oceans, and it is that action on their part that we want to be able to halt.”

Kline added, “Wayne and I were exploring an additional addendum to the air-sea battle, and a different approach to potentially influence, engage or deter China through what is called the war at sea strategy. We wanted to provide contributions to contain the conflict at sea by providing flexible term options.”

The duo presented and developed a strategy based on analysis, wargaming, concept generation, and risk assessment paired with an ‘ends, ways and means’ strategy, noted Kline.

The two professors made three recommendations in their strategic, albeit hypothetical, analysis to deny and deter China’s recent enterprise at sea.

The first was to leverage the U.S. fleet’s dominance in undersea warfare via submarines, smaller combatants and a forward-deployed flotilla. Second, the duo went on to encourage the utilization of the Marine Corps by prepositioning Marines on key islands around the seas as a deterrent. And finally, the team proposed interdicting and extending blockades of trade, while affording time for opportunities for negotiation to prevent escalation into a long-lasting mobilization.

“We emphasized that this is something that should precede strikes in the air-sea battle strategy which is why the title is, ‘Between Peace and the Air-Sea Battle: A War at Sea Strategy.’ These would come first as a way to influence China short of the possibility of the war expanding and getting out of control … becoming World War III,” said Hughes.

The Naval War College Review was established in 1948 and is a forum intended to address public policy matters in the interest of the maritime services. Articles are chosen from an array of sources in order to inform, stimulate and challenge readers, with the added use as a catalyst for new ideas.  Selection of articles is based on the their intellectual and literary merits, timeliness, and usefulness to a wide readership.