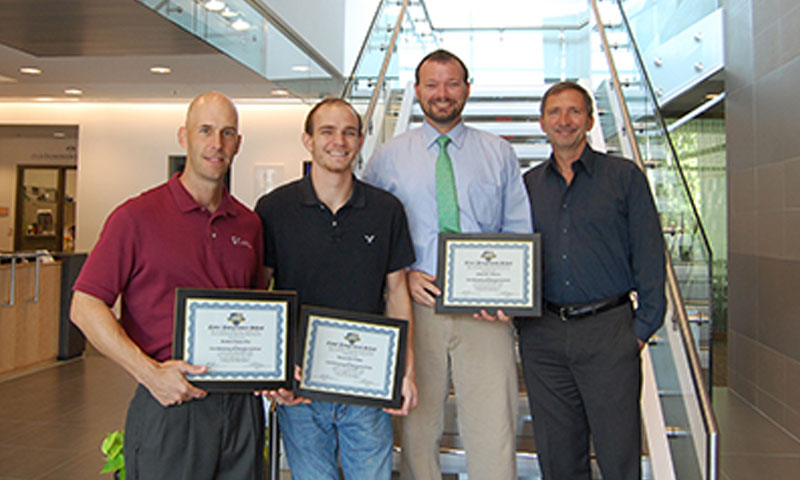 Brad Ellis, pictured far left, is part of the first cohort of 24 students earning a master’s degree in cost estimating and analysis through a new partnership between NPS and the Air Force Institute of Technology.

In the modern DOD world of vast program cost overruns and ever increasing fiscal scrutiny, the burgeoning discipline of cost estimating and analysis is finally getting its due.

Following a rigorous series of 16 courses in multidisciplinary fields such as operations research, systems engineering and business management, the group concluded their studies with a capstone project which had teams of students solving real-world cost estimating projects. The program, led by Dr. Daniel Nussbaum and Greg Mislick of the NPS Department of Operations Research, and by Professor Alfred Thal and Lt. Col. Dan Ritschel of AFIT, combines the strengths of both institutions to develop military cost analysts for this demanding, and much needed, field within DOD.

“This is the first time there has been a joint master’s degree in cost estimation and analysis, and we are very pleased with that distinction and with the wide reception and demand for the program,” said Nussbaum. “The collaboration and partnership with AFIT has been outstanding and we hope to continue working together in the future.”

“Every so often we're asked what we're doing to develop our people into better cost analysts. In years past, all we had was a certification program from DAU [Defense Acquisition University],” said Dane S. Cooper, Technical Director of Cost Engineering and Industrial Analysis within the Naval Sea Systems Command.

“We wanted a program that would go beyond what DAU provided – and in a big way,” he added. “So we asked NPS to work with AFIT to develop this program. This master’s program tells Congress, the contracting world, and the public that we're very serious about cost estimating.”

As the demand for qualified personnel in cost estimating and analysis has increased, the MCEA degree has found a broad pool of students and DOD organizations to support them, because of the flexibility and applicability of the education.

“My experience in the MCEA program thus far has been, in a word [or two], directly applicable,” said current MCEA student Brad Ellis of Cask Technologies. “Not a week goes by that I don't apply something I've learned in my coursework during my day-to-day cost estimating work.”

Ellis previously graduated from NPS with an MBA in financial management while he was on active duty in the Marine Corps. He stressed that the MCEA degree will be a great benefit to DOD because well-educated cost estimators will produce more effective estimates, helping to better facilitate decisions on resource allocations during acquisition programs.

Delivering the program to students from across the nation is no challenge for NPS, where distance-learning (DL) technology and programs have evolved over many years. Classes are delivered either via web-based asynchronous, or video teleconference, giving both students, and the program, flexibility in reaching a broader core of cost estimators and their commands.

“A major difference in studying for any degree through a DL program, as compared to a resident program, is time management,” said Ellis. “As a full-time student, we're all there on orders with a mission to focus on nothing but school.

“The DL program requires one to constantly balance competing priorities among school, work, community involvement and family,” Ellis continued, “In the end, it's like most endeavors in life … They require trade-offs, and I feel confident in saying the sacrifices required in studying for the MCEA degree will be well worth it in the long run.”

Now in its third year, the MCEA program continues to grow and develop, and is accepting applications for the future cohorts. Sponsored by NAVSEA, the MCEA was implemented in an effort to train government employees in cost estimation to meet the demands of the Weapons Systems Acquisition Reform Act of 2009 (WSARA 09).