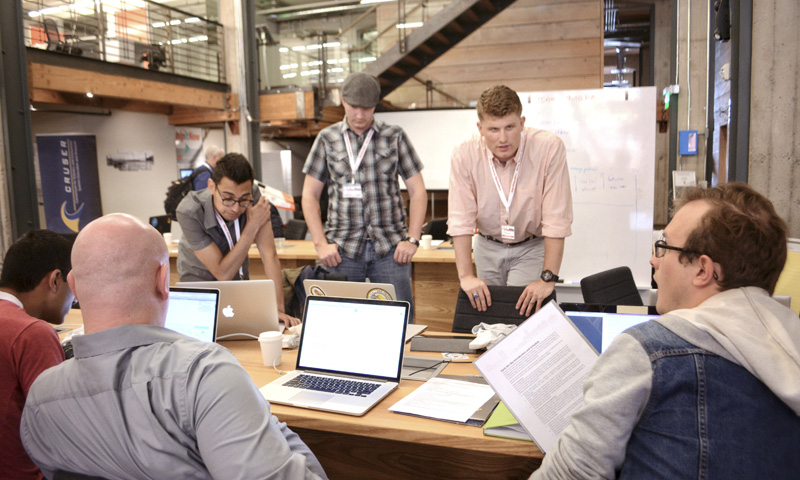 Participants brainstorm their methods of attack during the 2016 Navy “#HacktheSky” Hackathon, hosted by the Naval Postgraduate School (NPS) and Defense Innovation Unit Experimental (DIUx), at Galvanize in San Francisco, California, June 25. The event brought together an array of hackers, cyber experts, Silicon Valley tech representatives, and data scientists to discover vulnerabilities in code for unmanned aerial vehicles developed at NPS.

Last year, the Naval Postgraduate School (NPS) set a world record by flying a swarm of 50 autonomous drones all controlled by a single operator. Now, NPS and the Department of the Navy Office of Strategy and Innovation have challenged some of the best developers, hackers and designers in Silicon Valley to hack the control system.

The Navy's "#HacktheSky" hackathon and future of autonomy workshop being held June 24-26 at the innovation hub Galvanize in San Francisco, California, is bringing together an array of hackers, cyber experts, Silicon Valley tech representatives, and data scientists to find vulnerabilities in the drones' code. Ultimately, the purpose of the hackathon is to improve software, innovate upon technology created at NPS for unmanned systems, and foster stronger relationships between government, industry and bay area technical leaders.

"Right now, the commercial drone sector is six generations ahead of what the Department of the Navy is currently testing, because our cumbersome processes and requirements were designed for an era of manned aircraft and big expensive acquisitions," said Dr. Maura Sullivan, Chief of Strategy and Innovation for the U.S. Navy. "We are still attempting to apply the rules for physical systems to a digital world, but the event today is one of the ways we are looking to break down that paradigm."

"A leading software company like Facebook pushes revenue critical production code every day," added Navy Cmdr. Zachary Staples, Director of NPS' Center for Cyber Warfare. "But the Navy is developing software within an acquisition system that delivers code no faster than annually. We are at strategic risk of being outcompeted by adversaries that adopt code development speed as on organizing principle."

With technology advancing every day, becoming more sophisticated, user friendly and available to the masses, an outdated system is not conducive to a rapidly evolving strategic landscape.

"One of the meta purposes of #HacktheSky, aside from drone specifics, is that we will have working prototypes of advanced capability developed in a single weekend to demonstrate for our leadership," said Staples. "We don't want to tell leadership speed is possible, we want to SHOW them. I am hopeful we can walk out at the end of this event, whether you're military or civilian, believing the Navy can innovate at world-class speed."

There are limitations to what can be accomplished in a weekend, but experience shows that innovation can be nurtured by getting the right people together in one room.

"Spend the next two days moving beyond the apparent soundness of conventional wisdom, and working together to build toward the future that is already here," said Sullivan.

Teams have two full days to crack into the drones' code based on multiple scenarios, with prizes awarded to the teams with the most success. But beyond a few accolades and awards, the Navy will walk away with some critical feedback from the hacker community, and invaluable newfound knowledge about its swarming capabilities.