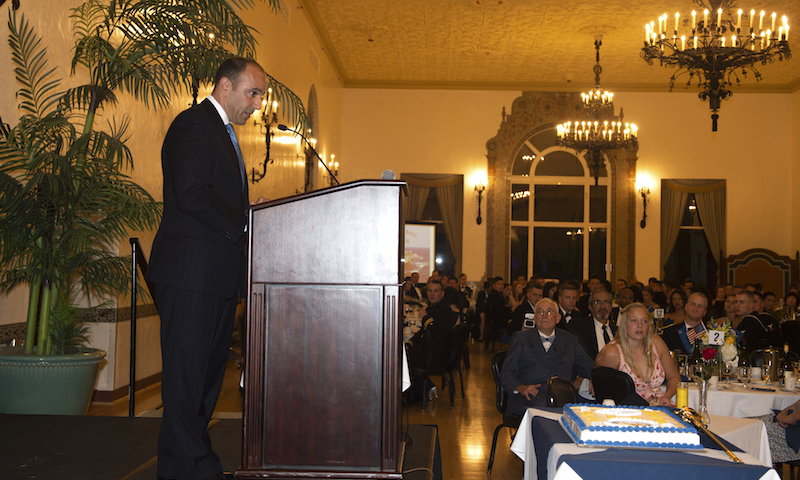 Service members and supporters from across the Peninsula gathered in the Barbara McNitt Ballroom, Oct. 13, in celebration of the Navy’s 243 birthday. Attendees were treated to a rousing address by local Congressman Jimmy Panetta, as he paid respect to the service and the many Sailors in the room.

“It is an absolute honor to be here as we celebrate 243 years that the Sailors of the U.S. Navy have not only flown the flag, but have served, fought and sacrificed to never give up any ship,” said Panetta. “It’s humbling to be in front of a room full of so many of you that have done just that, and I am proud knowing that you continue your service right here on the central coast of California.

Panetta himself served in the U.S. Naval Reserve from 2003-2011 before transitioning to civic service. He reflected on the values of service to community and country that were instilled in him and to his forefathers as they pursued an American immigrant’s dream.

“I have deep roots here. This is my home and it always will be,” said Panetta. “Carmel Valley is the hometown where my wife and I raise our two daughters, and I attended senior prom in this room right here.”

“Every Sunday night, we would go to dinner at my grandfather’s house, and my father would ask my grandfather why he would take such risk in coming here from Italy,” Panetta continued. “His response was simple, to give his children a better life.”

With that sacrifice in mind, Panetta said, his parents placed a high priority on service, and enforced those same priorities in their families.

In closing his remarks, Panetta took the time to express his thanks to NPS President retired Vice Adm. Ronald A. Route, for his own service to the Navy, nation and to NPS.

“Your time here was exemplary of your career,” he said, “as you furthered the prosperity of the Naval Postgraduate School.”

In 1972, then Chief of Naval Operations (CNO) Adm. Elmo R. Zumwalt authorized recognition of October 13 as the Navy's birthday. Since then, each CNO has encouraged a Navy-wide celebration of the occasion to enhance a greater appreciation of our Navy heritage, and to provide a positive influence toward pride and professionalism in the naval service.