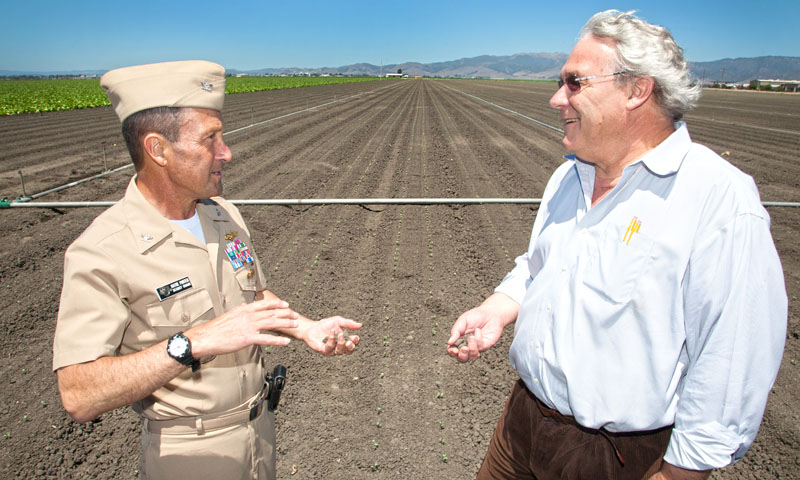 Naval Postgraduate School Chair of Systemic Strategy and Complexity Capt. Wayne Porter and Former Salinas Mayor Dennis Donahue are pictured in one of the many fields that support Salinas’ billion-dollar agriculture industry. Porter worked with Donahue and other local leaders to develop a long-term model aimed at the creation of a precision agriculture industrial cluster in the Salinas Valley.

U.S. Navy Capt. Wayne Porter twice served as Adm. Mike Mullen’s “deep thinker” in strategic systems. Until recently, he served as the Naval Postgraduate School’s (NPS) Chair of Systemic Strategy and Complexity, where in addition to his professional duties, he worked across the region with local mayors, academics and industry leaders to develop a series of computer models designed to support the development of a high-tech, agriculture focused, industrial cluster in the nearby Salinas Valley.

Porter’s 25-year models are not quite predictive, but he insists that by modeling investment and research, gang membership and prevention programs, education for technology employment, water management and the attractiveness of the Salinas Valley, city planners and others can make informed decisions that will lead to greater prosperity throughout the area.

While originally intended to address the Salinas Valley, Porter’s systems approach to modeling quickly caught the attention of U.S. Pacific Command (PACOM) planners. NPS Professor and Systems Engineering Chair Cliff Whitcomb has been applying ideas originally espoused by Porter, to models that he hopes will aid PACOM planners as they explore the future of U.S.-China relations.

“Capt. Porter’s work looking at the city of Salinas inspired the Joint Staff (J8) to fund our systems approach to understanding what influences the dynamics between the U.S. and China. [The models offer] a simulation based on how people think, when they put it together and demonstrated the relationships between variables, the joint staff realized that they could apply it to PACOM’s decision making process.

“The J8 funded project is part of a strategic multilayer assessment bringing people from around the world together to model U.S.-China relationship dynamics over the next 5-25 years,” said Whitcomb.

“[These models] are a flight simulator that allows decision makers to manipulate certain variables and thereby move the bar forward by understanding the systemic nature of the problem,” said Porter. “All human systems are non-linear in nature so understanding the feedback mechanism among them seems essential to strategic planning.”

The models were born out of a meeting between Porter and former Salinas Mayor Dennis Donahue who asked Porter to apply his modeling and strategic planning directly to the Salinas Valley. “What I think Wayne has brilliantly done is to create models that demonstrate how our [regional challenges] work together,” said Donahue. “One of the things that you learn, if your as attentive as a mayor, is that your always going to have challenges, and the best way to deal with the negative is to accentuate the positive.

“When you are dealing with situations like youth violence, economic expansion, creating prosperity … It's the anecdote over time that is important. Wayne’s modeling expresses that beautifully. I was really drawn to what Wayne was doing and I think he found Salinas to be a great laboratory,” explained Donahue.

Both Porter and Donahue recognized that Salinas not only nested well with Porter’s research at NPS, but that if used appropriately, it held the potential to lead to change in several important local areas.

“If [Porter’s] models get the visibility that they should, I think that they will be impactful,” said Donahue.

The former Salinas mayor is also hopeful that Porter’s models will help local people to see through local challenges, and to identify where resources need to be applied. He described his frustration with the tendency of outside policy makers to assign task forces or bring in outside agencies to solve local problems. He insists, as Porter’s work suggests, it is strategically-placed resources that are needed to address Salinas’ challenges.

“We don't need another group of people to look at the problem,” stressed Donahue. “What Wayne helps people to understand … is that it’s important to really see the issues clearly and the connectivity between those areas.

“For example, there is a lot of talk about water, and we tend to think of water as an agriculture issue. But [Salinas] is an area that continues to grow and there will be an urban impact on the water issue as well,” he continued. “[Porter’s] models show us other areas that we have to consider as well, and Wayne doesn't have to get all of the numbers exactly right, because you can always change the input, it's the modeling over time that is important.”

Porter’s modeling does in fact suggest that growth will eventually lead to over-stressed local water resources. His models reveal that as more high-income earners come into Salinas and begin to create jobs, build industry and purchase homes, the region’s already stretched water resources will eventually be depleted.

“Ninety percent of water in our county comes from the aquifer and agriculture uses 90 percent of that. If we grow, over time, our commercial and residential demand is going to increase and we are going to suck the well dry unless we come up with either a desalinization or reclamation model,” said Porter.

Porter’s work has had an impact on several local institutions. Most notably, it was through the contributions of Donahue, Porter and others that the Steinbeck Initiative was born. The initiative was inspired in part by a need to compensate for the loss of a major local employer, Capital One, and the larger goal of encouraging the development of a high-tech, smart agriculture industry in Salinas.

“The whole initiative flowed out of our response to the departure of Capital One from the community and the belief that the best thing we could do was to leverage our heritage, strength and proximity to the Silicon Valley to see if we could facilitate the arrival of an ag innovation cluster.

“Wayne’s narrative, work and participation have been part and parcel of the initiative from day one, we always wanted to incorporate his thinking into what we were doing … He was not on the boards, but his thinking and input really informed the direction that we were going from day one. In fact, we were speaking broadly about these ideas before the Capital One crisis hit,” said Donahue.

But despite Donahue’s vision for the city, Salinas was facing some very serious challenges: “a moribund economy, gang violence, education that was poorly equipped to serve the needs of a multicultural and bilingual community and water constraints.”

But where others saw challenges, Porter saw opportunities – opportunities to create a new model for sustainable economic development, and Porter believes that Salinas youth share his view.

“Our kids recognize the opportunity that comes with uncertainty, their gaze is not fixed on the rearview mirror,” said Porter.

Like Donahue, Porter had been considering the notion of industrial clusters for some time.

“I had studied the work of Harvard Economist Michael Porter on industrial clusters and I realized that industrial clusters worldwide all had common components: they brought together venture capitalists with research institutions; they had a core economic competency for the area, an educational system that supported it, and an adaptable labor force that was tailored to the core competency,” explained Porter.

“A long-term strategy began to take shape that leveraged regional characteristics of successful industrial clusters: a focused economic competency [agriculture and aquaculture]; the research and educational foundation found in several local colleges and universities; the co-location of capital investment and technological expertise in Silicon Valley; the municipal and regional support of local agricultural associations  [shippers and growers, ranchers, wine industry] and the availability of a potentially highly-skilled labor pool,” added Porter.

But Porter recognizes that for an industrial cluster strategy to work, people will have to change the way they are thinking about problems and that a shift of that magnitude will only occur through education. He is fond of citing Einstein who famously said, “We cannot solve our problems by using the same thinking that created them.”

“We spend more than any nation in the world on education, we need a better return on our investment,” said Porter. “Investment in new business results in fewer businesses than investing in education over time … new business need a thick workforce in order to be successful.”

Salinas Union High School District Superintendent Tim J. Vanoli is also working to help Salinas youth to develop the tools they will need to be successful.

“I was intrigued by the concept of precision agriculture and focused on what we can do to retool our programs in that regard,” said Vanoli. “We need to build the capacity of our students as to what is in their own backyard and give them some context about the job prospects.”

Porter’s models also offer a window into the point where areas like education, or the lack thereof, and gang membership intersect. In Porter’s view, gang membership is “infectious,” and educational investments, particularly in the areas of Science Technology Engineering and Mathematics (STEM) have the ability to “inoculate” students from the lures of gang membership.

“We have to find niches for kids and you have to do it at a young age in the 4th, 5th and 6th grades. If we get them interested … we can start building capacity for career paths, which leads to a well-trained work force," agreed Vanoli. “You want to build on what kids' interests and strengths are - the more you do that, the more likely they are to focus on those activities over the negative.”

Porter also points to the link between quality education and the attractiveness of a particular area to upper income earners and potential investors.

“As soon as education takes off, attractiveness takes off,” said Porter. “65 percent of revenue in Salinas comes from sales tax, high-income earners result in more revenue per capita which results in a host of factors.”

All of these modeled factors have contributed to the development of regional plans and initiatives aimed at the creation of an industrial cluster in the Salinas Valley.

Whether or not the collaborative efforts of the many players invested in Salinas’ long-term growth will be successful or not remains to be seen, but Porter’s confidence is more than a little infectious, with the opportunities he describes inspiring. If successful, Porter’s models and the strategies that they support have the potential to bring real change to the Salinas Valley and inform decision makers in the halls of PACOM.