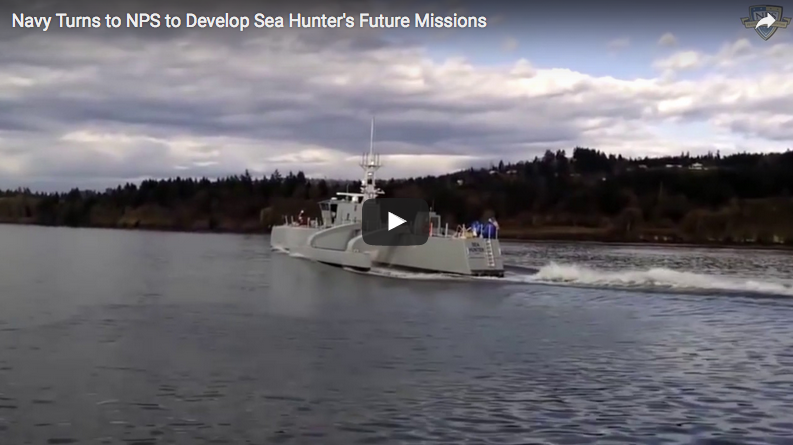 When the Defense Advanced Research Projects Agency (DARPA) completed the development of its futuristic Anti-Submarine Warfare Continuous Trail Unmanned Vessel (ACTUV), commonly referred to as Sea Hunter, it turned the functioning vessel over to the Navy to envision how the service could use the technological marvel. In turn, the Navy turned to the Naval Postgraduate School (NPS) and its students and faculty to help.

“I think we are already seeing new missions emerge out of our study for how unmanned systems can be used,” said Kelley. “Often our missions are dictated because we have a human actually on the platform, or thousands in the case of a carrier. When we are able to take the traditional missions that we have today, and do them with unmanned systems, a lot of our problems get solved.”

Some of the benefits to unmanned systems are reducing risk to our Sailors and Marines, Kelley noted, a lower price per unit in comparison to a manned vessel, and developing missions that utilize the capability of a ship that can go on patrol for extended periods of time.

“We can probably take higher risk at cheaper cost, and we can probably overcome some of the problems that physics and the environment present to us with an unmanned system and that frees up our Sailors and Marines to do other things,” continued Kelley.

“There is some ground breaking work being done by [Deputy Assistant Secretary of the Navy for Research, Development, Test and Evaluation] Dr. John Burrow using set-based design and model engineering to take a look at what are some of the other things that unmanned systems can accomplish. These things will become the tasks and missions of the future,” Kelley added.

Sea Hunter’s Program Manager at DARPA, Scott Littlefield was a key participant in the effort, providing some of the critical questions discussed among the NPS students and faculty, and the visiting subject matter experts.

“What are all of the different missions we want to do with ACTUV? How do we do command and control? How does it interact with other ships when you think about man and unmanned teaming? How would this work with a battle group or a surface action group? Or would it go and do missions independently from other ships? How would we really use it in operations in peacetime and in war?”

In addition to the breakout sessions discussing these questions, Littlefield was eager to hear from NPS students who brought more insight than he had anticipated.

“I think NPS is a unique institution in terms of having the right mix of people to help us get at some of these questions, because the students have operational backgrounds,” said Littlefield. “They have been in the fleet recently so they bring that perspective that helps us understand not only the technology but how the technology will be used.

“I think we have heard a lot of things from the students that is very innovative,” Littlefield continued. “One of the things that came up more strongly than I had anticipated was from the METOC [Meteorology and Oceanography] community. They have interest in using it as a collection platform for weather and oceanographic data, and that may be sort of a secondary mission, while it’s deployed for extended periods of time. It can function as a sensor node that is collecting data that can be brought back for our models of predicting underwater and surface conditions in meteorology and acoustic propagation.”

Research Associate Brian Wood helped coordinate the workshop with DARPA, bringing together members of several different disciplines along with students who are presenting thesis proposals on subjects from acquisitions to sonar detection.

“Antisubmarine warfare is the primary capability envisioned for Sea Hunter during its development, but the vessel is clearly capable of more,” said Wood. “Other missions that are being looked into are intelligence, surveillance and reconnaissance, as well as mine warfare, electronic warfare and command and control operations.”

U.S. Air Force Capt. Eric Ehn is one of the students participating in the workshop, his thesis proposal examines the acquisition of artificial intelligence (AI).

“My thesis is going to be on how you do acquisition for AI, and the ACTUV appears to be a good example for a first step. I’m hoping to do a case study and see if that will lead to some kind of preparedness for AI acquisition,” said Ehn.

AI crosses a broad spectrum … What Ehn looks to overcome with his research will be understanding current policies in both areas of AI and acquisition to find the optimal path to connect the technology and the warfighter, something he says will pay dividends when he returns to the force.

“At the end of the day, it is still computer software and a machine, but when you don’t have a person onboard telling it what to do, you are going to run into roadblocks,” he noted. “This workshop is really helpful in my education. So far in my career I’ve only worked sustainment, and as an operator, so I’ve seen the end of a life cycle working with the product. I’ve never gone back to the beginning to trace the technology’s transition to something a warfighter would fight with. This will definitely help when I go back out to the Air Force.”