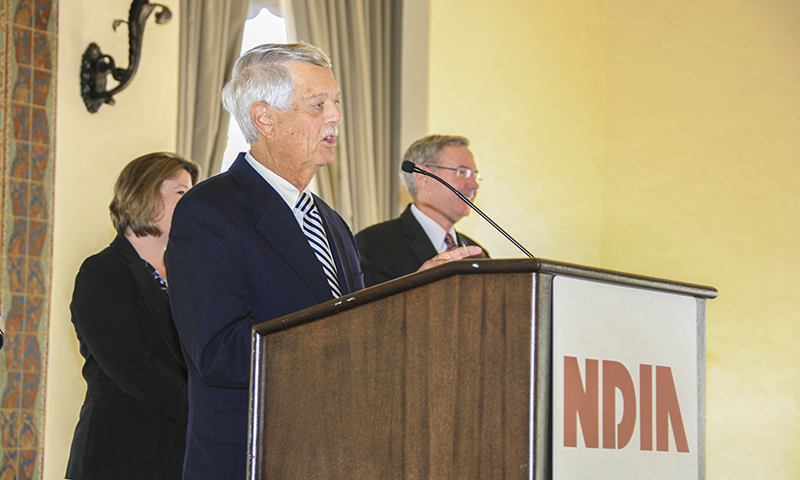 NPS Distinguished Professor Emeritus Robert E. Ball announces the inaugural selection of the National Defense Industrial Association’s (NDIA) Young Professional Award for Combat Survivability during the NDIA Survivability Symposium, Nov.8. The organization honored Ball, a pillar in the field of aircraft survivability, by renaming the award in his honor.

The inaugural Robert E. Ball Award was presented to Boeing Phantom Works Engineer Laura Trench, one of five awards presented at NDIA’s annual symposium during the luncheon and award ceremony.

The well-attended symposium returned to NPS again, as it has for several years, considered the perfect setting to engage the full gamut of their membership, including corporate, government, academic and individual stakeholders who are part of a collaborative community who support defense and national security.

A key topic of conversation was NDIA’s recent Defense Industrial Base Study Report, released Oct. 4, providing an examination of potential gaps in the American defense industrial base. The organization is also preparing to celebrate its centennial in 2019, launching a yearlong celebration in January. Of course, at its core, the symposium serves as a forum to discuss survivability technologies, sustainment and operations across a multidomain battlespace.

“NDIA hopes the symposium fostered dialogue and networking opportunities among the event participants, so everyone from the senior-level government and industry representatives to the military and academia who attended can contribute to the main goal, to learn what is needed for the fight today and plan for the survivability challenges of tomorrow,” said Evamarie Socha, NDIA Director of Public Relations.