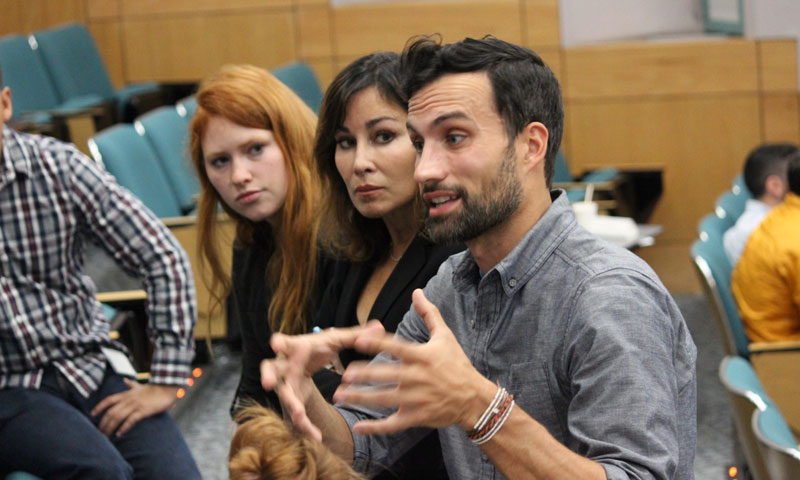 The ONR NEPTUNE Challenge Summit, hosted by NPS’ Energy Academic Group May 21-23, brought together scores of academics involved in the Office of Naval Research (ONR)-funded program to impart a new model for solving defense-related problems.

Over the three-day seminar, participating NEPTUNE schools – Massachusetts Institute of Technology, Purdue, Arizona State University, University of California at Davis, NPS, and others – were brought up to speed with Hacking for Defense (H4D), a Stanford-developed model of adapting best practices from Silicon Valley startups to the Department of Defense (DOD).

“We wanted to introduce the basic concepts associated with the H4D methodology such that they could start applying them in a process tied to their NEPTUNE research,” said Ray Dick, executive director of the nonprofit Hacking for Defense, Inc.

The event was part of a new initiative, the Naval Innovation Process Adoption (NIPA), to streamline ONR’s approach to developing new technologies. Launched in March at NPS, NIPA seeks to connect teams of engineers, scientists, MBAs, operators and subject matter experts using the H4D model to expedite innovation in a reliable, efficient manner.

“Supporting ONR and NIPA is an exciting opportunity, and aligns perfectly with the kind of innovative learning we do well at NPS,” said Dan Nussbaum, EAG Principal. “The next step for NPS is to send instructors to an intensive training program later this month to learn how to teach the H4D method and incorporate it into our courses at NPS.”

“This will benefit the next generation of Naval leaders who are current students at NPS, and who will gain deep knowledge on a novel model for critical thinking, problem solving, and innovation,” he added.

It is essential to energize how naval innovation takes place to empower novel ideas, according to Dr. Rich Carlin, head of ONR’s Sea Warfare and Weapons Department, which spearheaded NIPA.

“The National Defense Strategy states it clearly,” he said. “We are in a new era of challenges, with adversaries making dramatic gains. As technology advances faster than ever before, and both state and non-state actors having access to it, the naval research community needs to accelerate accordingly.”

H4D has a proven track record of enabling students to iterate prototypes and find solutions to vexing problems in a short amount of time for sponsors across DOD and the intelligence community.

Launched four years ago as a Stanford University class by retired Army Col. Pete Newell, former head of the Army’s Rapid Equipping Force, and Adjunct Professor Steve Blank, creator of the Lean Startup movement, H4D has spread to 11 universities across the nation. It provides a deep understanding of the problem space in a way that conventional commercial efforts can’t, Dick said.

“They’re looking for a market for a solution, rather than finding a solution to the problem,” Dick explained. “There’s a need to understand operational problems. What if we took a bunch of really smart students and threw a problem at them? What can we accomplish in a short period of time to really understand the problem space?”

The key to successfully accomplishing this is embracing the interdisciplinary nature of research, he added.

“When we go solve problems, very rarely do you see a problem that is only a mechanical engineering problem, or only a physics problem,” he said. “Real life isn’t like that ... It’s messy.”

Rather than focusing purely on technology, H4D challenges students to think holistically about all stakeholders, from the end user to the decision maker to the purchaser. In the span of a university semester, a team will interview hundreds of stakeholders to increasingly refine the problem.

“These interview sessions are very productive, in the sense that you start to get a sense of the contour of the problem itself, and the only way to get this is to talk to people,” said Michael Simeone, a research professor at Arizona State University who attended the seminar. “If you’re connecting the dots to make the shape, they’re the dots that are going to help you.”

The NIPA program incorporates this methodology in its drive to spur innovation in the Navy and Marine Corps, and the ONR NEPTUNE Challenge Summit brought this to discovering new ways to improve energy conservation, generate renewable energy and implement energy-efficient technologies.

“This workshop really focused on trying to identify the true problem, who you’re solving it for, and how you can best move quickly to move out a solution in a short period of time,” said Alex Campbell, a graduate student at UC Davis’ Energy Graduate Group.

“I’ve learned that not all problems are as straight-forward as they may seem. For instance, if you have a technical problem, maybe your solution might actually be more social or people-focused.”

Gozdem Kilaz, assistant professor of mechanical engineering technology at Purdue, will take what she learned forward to study alternative aviation fuels with her students.

“It’s important to utilize these innovative teaching techniques,” she said. “Nowadays, every problem is a universal problem. We can’t just isolate ourselves in departments; everything has to be considered, so being able to learn the techniques to first define the problem, which is not as black and white as it used to be, is going to be so helpful for me to mentor my students.”

“I think it’s going to be the beginning of a very fruitful collaboration,” she said.

A follow-on seminar, the Super Swarm Challenge, is slated for September 2018 at NPS. The event will draw on the experiences of the NIPA Launch and the ONR NEPTUNE Challenge Summit.