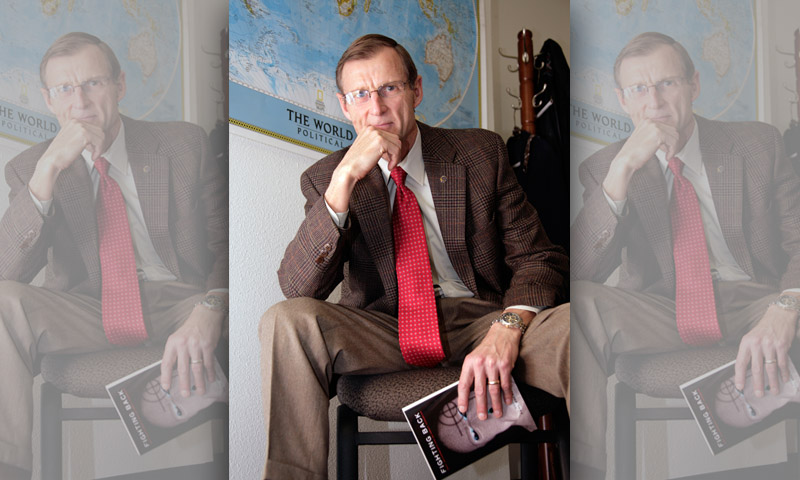 Retired Navy Capt. Paul Shemella, a program manager with the Center for Civil-Military Relations at NPS, holds a copy of the new book he edited, compiling the strategies evolved through near 10 years of the Combating Terrorism Fellowship Program.

The Combating Terrorism Fellowship Program (CTFP) has worked with over 145 countries on sharing strategies to combat terrorism on the national and regional levels since its inception in 2002. And true to that mission, CTFP instructors continue to share – this time in the form of a book – “Fighting Back: What Governments Can Do About Terrorism.”

The book, published by Stanford University Press, was edited by CTFP’s own Paul Shemella, a retired Navy Captain and current program manager for the Center for Civil-Military Relations (CCMR) CTFP at the Naval Postgraduate School.  Shemella was also an author, writing six of the chapters for “Fighting Back.” He recruited the other contributing authors as well, most of whom are instructors in CTFP.

Using CTFP instructors made sense for the project because the book represents a compilation of the knowledge, ideas and case studies accrued through hundreds of CTFP seminars. These seminars are hosted in allied and friendly countries and are attended by foreign officials who are involved with their nation’s counterterrorism programs and organizations.

“The value of the book is having all the important aspects of responding to terrorism in all places,” said Shemella. “In the book we don’t talk about the U.S. very much – we talk about all governments. We present the basics of combating terrorism strategy along with new theories and practical tools governments can use in a very readable format.

“While American audiences would get a lot out of the book, it wasn’t written with them in mind,” said Shemella. “The audience for this book is primarily our students, although they aren’t really students so much as our international colleagues.

“The specter of terrorism is everywhere and everyone must confront it. CTFP participants represent a group of cooperating governments and collaborating governments fighting a world-wide problem,” said Shemella.

Shemella is quick to point out that while the problem of terrorism is universal, the approach to tackling it is not.  He points to a quote from the preface of the book which he feels sums up his point of view, “Each government confronts the same basic challenges, but every government manages those challenges according to its own historical, cultural, and political circumstances.

“CTFP is about reaching out to partners and hearing their ideas and models of thinking, and sharing with them other international partners’ ideas. They can take and use the ideas we bring them or not, although many of them do take them,” said Shemella. “This book is one more resource for our friends and partners to use when making decisions about risk assessment, resource allocation, ethics or measures of effectiveness in combating terrorism.”

While the book presents many new ideas to the counterterrorism community, Shemella believes their approach to thinking about terrorism is noteworthy.

“We take a comprehensive approach to terrorism that involves three key ways of thinking – core strategy, offense and defense,” said Shemella. “The core strategy is a nation’s long-term, day-to-day efforts designed to stop root causes of terrorism. The offensive strategy is the nation’s mid- to long-term plan to go after known terrorist threats. The defensive strategy is two-pronged. It involves first identifying vulnerabilities and devoting resources to protect the most important. Then, nations must develop the capacity to manage the consequences of terrorism that can’t be prevented – often through an all-hazards approach given the realities of limited resources.

“The implementation of these three steps will vary from country to country, but the way of thinking about these three aspects is applicable to all,” Shemella said.

Shemella plans to provide new seminar participants with a copy of the book as reference material. He hopes participants will also pass the book along to colleagues who are interested in how to develop national and regional strategies to combat terrorism.