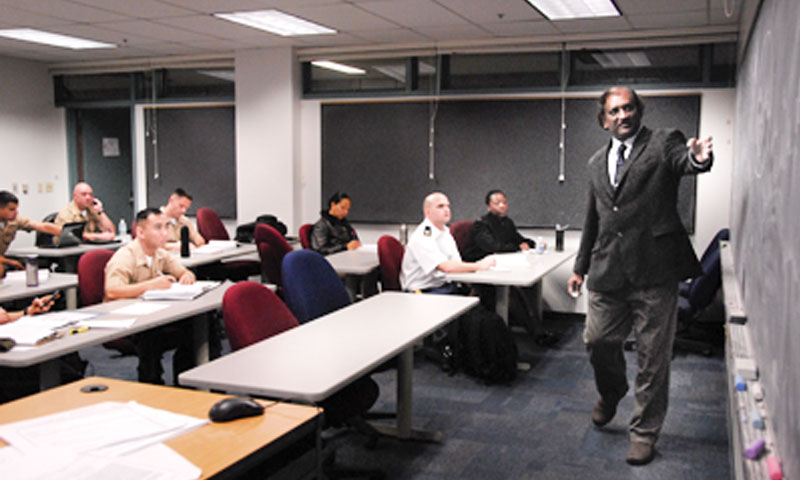 Professor and Director of the Office of the Dean of Research, Dr. Sivaguru S. Sritharan, pictured lecturing to one of his current classes, is the director of the recently launched Center of Decision, Risk, Controls and Signals Intelligence, established to examine future DoD technology trends from a mathematical perspective.

Reinforcing its role as a defense-relevant research institution, the Naval Postgraduate School (NPS) has established the new Center for Decision, Risk, Controls and Signals Intelligence (DRCSI) as part of an effort by the university and DoD to promote advanced mathematical research to meet and overcome the technological challenges of the future.

“The goal of the center,” said DRCSI Professor and Director of the Office of the Dean of Research, Dr. Sivaguru S. Sritharan, “is to look decades into the future and ask the question, what are the cutting-edge science and technology frontiers that will keep the U.S. the leader in defense-related disciplines?”

Sritharan noted the research could have broad and far-reaching impact on the future of the nation. “Long-range thinking will naturally lead to scientific questions,” he noted.

The mathematical nature of the center gives it a unique vision, said Sritharan, because it overlaps with several academic departments, centers and institutes. Primarily focused on two driving themes—strategic systems of the future and signals intelligence—the center reaches into diverse areas, such as economics, energy security, global security policy and strategy.

Sritharan said the research center has a long term vision of building a group of faculty and students who would be adequately cleared to work on high-level, interdisciplinary projects of strategic importance to national security, while at the same time be able to work in the open domain keeping NPS at the scientific leading-edge.

Like most centers, it will run in concert with the existing operations of different academic departments, so that faculty with the most relevant expertise in strategic systems and signals intelligence can come together to address long-term, high-risk research in these technical areas.

Sritharan has high aspirations for the center — a forum where researchers from multiple disciplines can put forward ideas or problems and through collaboration, and find solutions for the obstacles they might encounter in their particular specialties.

Sritharan, a longtime advocate of the continued growth of NPS’ civilian Ph.D. student population during his tenure as Dean of the Graduate School of Engineering and Applied Sciences (GSEAS), proudly noted the center’s role in graduating its first Ph.D. student, Nathan Moshman, completing his dissertation this past September.