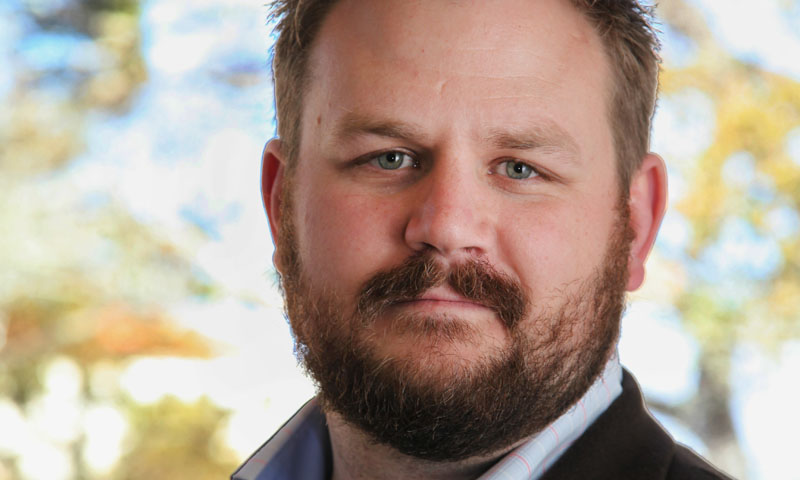 NPS Assistant Professor Bradley Strawser recently joined the defense analysis department, bringing with him a background in philosophy and ethics that will challenge students to explore the ethical implications of war.

The Naval Postgraduate School Department of Defense Analysis (DA) welcomed a new face to the department – an ethicist and philosopher whose fresh perspective has students talking about the ethical implications of warfare.

Assistant Professor Dr. Bradley Strawser helps students think critically about the important ethical questions surrounding war. Strawser, a former member of the Air Force, served as a professor at the Air Force Academy and the University of Connecticut before finding his way to the Naval Academy’s Stockdale Center as a postdoctoral research fellow.

And now since joining NPS, Strawser has begun teaching classes in critical thinking and ethical decision making, where students explore ethical challenges in an applied way, drawing from case studies and real-world examples to get to the bottom of the tough questions.

“I view my job as to push them, challenge them, and get them to wrestle over these deep questions. I hate war – war is a horrible thing. But I do think in some contexts war can be morally justified,” Strawser explained. “And wrestling through that is a complicated, difficult task. I think my main role is trying to push the students to engage in that process of taking the moral questions of what they do for a living seriously.”

As is often the case with conversations of ethics, the ethics of war has its fair share of scholarly debate, particularly once conclusions are reached on which acts of war may or may not be ethical. The DA department looks to empower the students in their ethical decision making, by giving them the tools and resources to explore a number of scenarios – such as the use of unmanned systems to deploy lethal force, or the facets of irregular warfare.

"We are very pleased that Bradley Strawser chose to join NPS,” said DA Chairman and Professor Dr. John Arquilla. “As a philosopher, he adds to the diversity of the DA department faculty. As someone interested in the ethics of going to war justly, and waging war in a moral manner, his expertise is much needed.

“It's crucial for our students to have an opportunity to explore the ethical implications of their decisions, especially as they practice their profession in an era of protracted warfare against shadowy opponents,” he added. “Professor Strawser will challenge our students – Americans and internationals – to look at a range of issues objectively and carefully from an ethical perspective.”

Given Strawser’s previous experience at the Air Force and Naval academies, and now at NPS, he has been impressed with the caliber of men and women who will ultimately be the defense department’s decision makers of the future. He noted that his students take the ethical conversations seriously, and understand their roles as military leaders in ensuring the best choices are made in the battlefield.

“I think most people will agree that we need to think morally about war. What is controversial is when you actually come to some clear conclusions on things. When you say, ‘I wrestled through that and I think this is probably morally wrong.’

“Students here, when they are not here, are the tip of the spear. They are very concerned, and rightly so, with being discriminate and careful and only engaging when they absolutely have to,” he added. “There really is this trajectory of significant moral improvement in our thinking about war.”

One of the examples explored in Strawser’s class is the ethics of cyberwar. As a relatively new domain, cyberspace has a number of challenges to still be worked through. It raises a number of difficult questions about what war in cyberspace looks like, and the potential it has to translate into physical damage to an infrastructure.

“In cyberwar, you often don’t know who is attacking you,” he added. “That’s a new dimension. How do you ethically respond to that? What if you are just pretty sure it’s that country? Does that give you the right to response? These are interesting and important ethical questions that will confront our military leaders.”

With the addition of Strawser, the DA department hopes to offer additional classes in the future, further drawing on his expertise to enhance the breadth of the DA curriculum.

“There is a big resurgence in the literature on the ethics of war right now, so it’s a great time for me, professionally,” Strawser said. “In any given discipline, topics ebb and flow in their popularity, and right now in philosophy, this is the hot thing. It’s a really exciting time to be a part of it as a researcher, but it’s also a really satisfying thing to teach to the actual practitioners of war.

“The hope is that we can teach to that ongoing dialog rather than shy away from it. Get the students themselves involved in the debate,” he added.