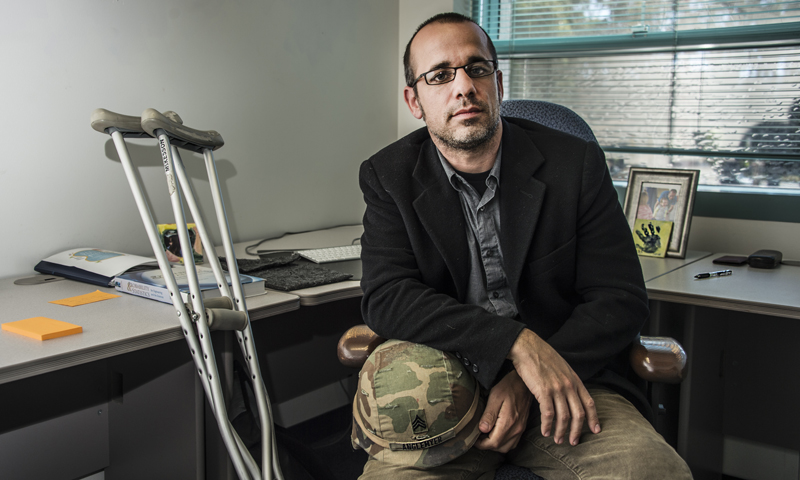 NPS Department of Operations Research Assistant Professor Andrew Anglemyer recently published an article in the Annals of Internal Medicine titled, “Suicide Rates in Active Duty Personnel, 2005-2011.” Anglemyer’s article provides a detailed data analysis of suicides of all types among male service members in hopes of advancing prevention techniques across the DOD and beyond.

“Clearly a need exists to identify military personnel at risk for suicide and to provide them with necessary care. Identifying the service members most at risk is challenging for various reasons, including a resistance to seeking care because of the fear of stigmatization or of jeopardizing one’s career,” explained Anglemyer.

Anglemyer’s paper began as a student thesis by Lt. Cmdr. Matthew Miller who looked at rates of suicide over time among various subgroups of active duty enlisted service members.

“I went a step further to determine who chooses a violent method of suicide over a non-violent method, which may lead to prevention efforts,” explained Anglemyer.

As an epidemiologist, Anglemyer has devoted much of his time to researching infectious disease. His past work focused on, among other things, AIDS research and disease dynamics in human populations.

“I became interested in violence because it acts like an infectious disease, a contagion, and it spreads quickly,” said Anglemyer. “Violence can be plotted on a map and where the next violent outcome will occur can be predicted. I think suicide is a similar, and we are getting very close to determining what can be the next trigger for a suicide.”

Anglemyer drew upon data from Defense Manpower Data Center (DMDC) which uses data from both the Centers for Disease Control and Prevention (CDC) and the Military Mortality Database to create a Suicide Data Repository (SDR), which has collected information on all suicides within the continental U.S. among U.S. service members from 2005-2011.

In the future, Anglemeyer hopes to expand upon his current findings by examining suicides that have occurred overseas, including the suicide rates of service members who took their own lives while deployed to Iraq and Afghanistan.

“We restricted our studies to males, because 96 percent of all suicides in the military are committed by men,” said Anglemyer. “In the general population, it is also true that most succesful suicides are completed by men.”

Key to Anglemyer’s approach, and what he hopes will lead to suicide prevention measures, is his assumption that “anyone that serves in the military is at high risk” for suicide.

“Although the risk dynamics of deployment history, job classification, and branch are not fully understood, assuming all personnel are at risk and assessing them appropriately by using a validated screening tool may be an effective means of reducing suicide attempts,” said Anglemyer. “The American Academy of Family Physicians has emphasized the need for clinicians first to identify at-risk service members by tailoring military-specific questions regarding their mental health.”

Of those questions, Anglemyer notes the importance of understanding the effects of alcohol and access to firearms, both of which have been shown to be significant factors in succesful suicide attempts.

“Clinicians should recognize the unique risks that firearms pose in this population - not only do veterans have four times more firearms than non-veterans, but veterans are more likely than non-veterans to use them to commit suicide,” said Anglemyer. “Suicide is often an impulsive decision. Something happens and a person makes an impulsive decision with deadly consequences.”

But while the linkage to guns and alcohol seems to be clear, Anglemyer does not assume to know what exactly leads such a high percentage of service members to actually commit to such a tragic end. And while he acknowledges that combat deployments may be contributing to increased suicide rates, he recognizes that not all combat deployments are the same. He notes a need to refine the data to explore the potential effects of the many different types of deployments, pointing out that there are notable differences between Army and Marine Corps deployments when compared to the deployments of Sailors at sea or Airmen.

Still, Anglemyer is adamant that there are other factors that must be considered when seeking to determine what leads a service member to take his or her own life. He refers to a potentially “unquantifiable stressor,” perhaps the personal and familial stress associated with the potential to deploy into a combat zone, if not the deployment itself, as a possibility.