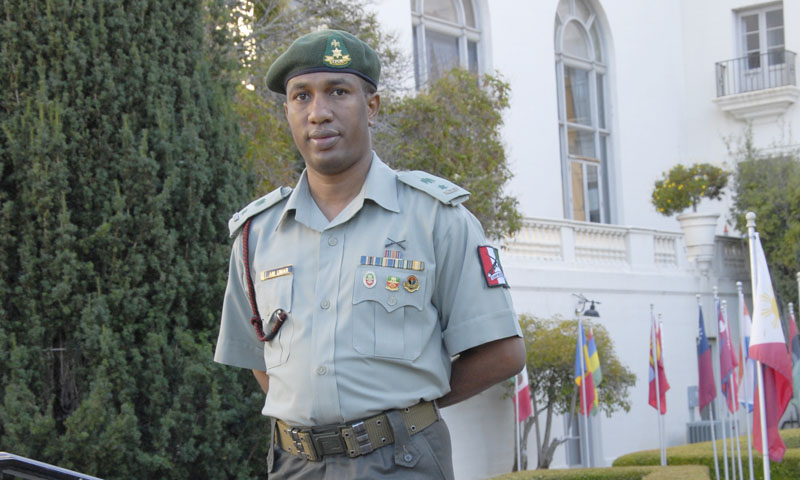 Nigerian Army Lt. Col. Umar Aminu, currently working toward a degree in national security studies at NPS, hopes that his education in the U.S. will help him promote unity in his country when returns to teach at the Nigerian Armed Forces Command and Staff College.

Nigeria is the most populous country in Africa, and has the second largest economy on the developing continent. But after years of military rule and a transition to civilian government, the nation is working hard to heal the deep wounds left by a civil war in the late 1960s.

Nigerian Army Lt. Col. Umar Aminu, a student at the Naval Postgraduate School (NPS), believes that education is the key to national unity and healing in his country. Citing himself as an example, he says that hard work and education has been a catalyst to break out of the regional mindset that dominates rural Nigerian communities.

“The military education that I received caused a shift in my thinking,” said Aminu.

Aminu describes the traditional division of Nigeria into three dominant regions, and the resulting mistrust that his countrymen are struggling to overcome. He insists that when people come together through work, education and military experience, that old biases can be corrected and unity built. Aminu credits his military training with opening his eyes to a much larger Nigeria.

“Training at the military academy revealed to us that we are all human begins and helped us to strip away our biases,” said Aminu. “It helped me to think objectively … We worked together, trained together, ate together … If something happened in one part of the country, we were able to understand the event objectively and begin to seek a solution.”

Aminu desired to further his education at NPS, and his service agreed. He is working toward a graduate degree in Regional Security Studies, with a focus on sub-Saharan Africa. Upon graduation, he will return to Nigeria to teach at the Nigerian Armed Forces Command and Staff College.

“I will be teaching staff duties, strategic and joint operational planning,” said Aminu. “NPS has helped me to understand the various countries in the region … people are the same, but their histories are different, and those histories effect the way we view each other.”

Aminu speaks more like an educator than a military officer. He is working on a graduate thesis that seeks to create a strategic framework in resolving the conflict between the notorious Boko-Haram movement in Northern Nigeria and the government.

“These groups are hinged on poverty and illiteracy. If you told them the earth was flat and that you would fall off the edge if you go too close, they’d believe it,” said Aminu. “It is through education that we will solve these problems.”