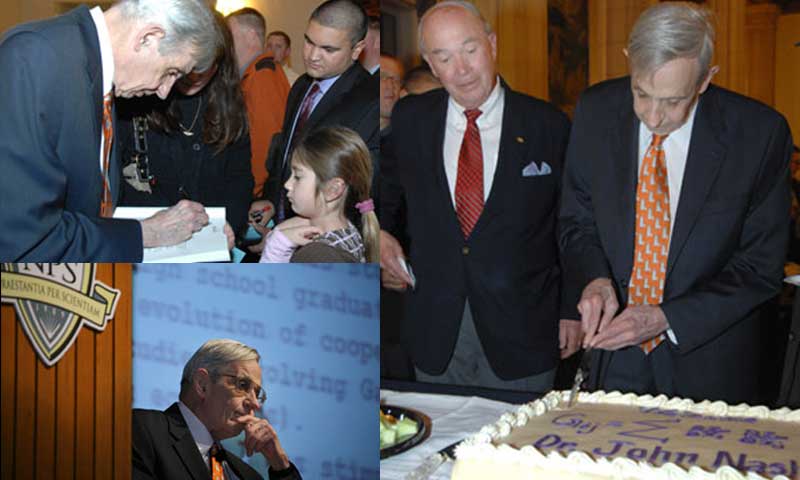 A term from his own beloved field of mathematics, singularity, best describes the profound impression Nobel Laureate Dr. John Forbes Nash Jr. made on the Naval Postgraduate School during his week-long academic visit, Feb. 15-21: the quality or state of being one of a kind.

NPS faculty and students excitedly described the uniqueness and brilliance of the octogenarian Princeton University Senior Research Mathematician who participated in classes, toured labs and presented the third in a series of special lectures by Nobel laureates at NPS.

Nash's world renowned contributions in non-cooperative game theory, differential geometry and partial differential equations began with a Cold War era interest in bargaining and gambling and provide deep insight into complex natural systems and collective human behavior. His work is widely used in economics, evolutionary biology and military theory and for predicting the outcome of competition and conflict. In 1994, Nash shared the Nobel Memorial Prize in Economic Sciences with two fellow game theorists for his Ph.D. thesis, and is the subject of the Academy Award winning film A Beautiful Mind.

"Professor John Nash is one of the most famous and innovative mathematicians of our lifetime whose work has shown the power of deep mathematics to link the life sciences, social sciences, physical sciences and engineering sciences, and his week-long visit to NPS is one of the most special moments in the hundred-year history of the university," said GSEAS Dean Sivaguru Sritharan. "It was a great honor and credit to the school that he accepted our invitation, and his guest lectures and visits to a number of classes across campus were extremely well received by the faculty and students. His gentle and humble personality was an inspiration to the entire campus community."

"Professor Nash is the best known academic in America," Owen said. "With a Nobel Prize and [being] the subject of a heartwarming film that won the Oscar for Best Picture, people want to see this brilliant man who had all these personal problems and yet overcame them. Bringing him here to NPS, where he definitely enjoyed his stay, many more people will hear about the Naval Postgraduate School."

"It was a surreal experience to have him here, like you almost had to pinch yourself to believe it’s real," said Associate Prof. of Mathematics Francis Giraldo who was an undergraduate at Nash’s university, Princeton, and sat across from the Nobel laureate at a special dinner for faculty and students. "His work has touched so many fields in mathematics, including my subfield of partial differential equations, and the amount of energy he had at age 80 for a full week of non-stop activities was awe inspiring. To have this caliber of scholar come to NPS for such an extended period of time reflects great credit on the School."

"Professor Nash has nearly rock star quality and generated an excitement in the students that you hardly ever see, especially in science and engineering fields," said former GSEAS Associate Dean and Mechanical and Astronautical Engineering Lecturer retired Navy Capt. Chris Adams. "Interacting with him was a very rare, unique event for everyone who met him."

"Professor Nash is probably the smartest mathematician alive today," she stressed. "No one still alive has made such a large contribution in the field of mathematics and continues to do so," Vanatta said. "Where else but NPS could you get the opportunity to interact with a world-class scholar of this caliber over such an extended period of time? He's not only incredibly intelligent – in math, you usually do your best work by age 30, and he's still making really significant contributions at 80 - but has a truly strong character. I had the opportunity to talk with him one on one about my dissertation, and we shared our joy in doing mathematics."

The highlight of Nash's visit was his Graduate School of Engineering and Applied Sciences (GSEAS) Distinguished Lecture on "The Agencies Method for Modeling Coalitions and Cooperation in Games," in King Hall Feb. 19. Sensing the historic importance and singularity of the moment, for the first time in recent memory the assembled student body rose to give the soft-spoken hero of "A Beautiful Mind" a standing ovation. The movie dramatized Nash’s struggle with what he calls mental disturbances, which he overcame with the extraordinary devotion and dedication of his wife Alicia, who accompanied him with their son to NPS.

Following the lecture, the Nobel laureate also attended and spoke at a gala Nash family reception on the Herrmann Hall Quarterdeck, the spacious lobby of the historic Old Del Monte Hotel. Following an informal discussion of game theory from the podium, Nash cut a large sheet cake decorated with one of his most famous formulas as his physicist life partner Alicia Larde Nash and their son, Ph.D. mathematician John Charles Martin Nash, looked on (photo).

In a memorable moment reflective of his subtle sense of humor, before cutting the cake Nash read the formula arrayed in Navy blue icing and declared it to be inaccurate. The first letter G, he gently explained, implies a special Einsteinian case and should have been the more general 'M' for 'Metric,' and a critical epsilon under the summation symbol was also missing. The formula is the solution to a famous problem in geometry that arises in both general relativity and quantum field theory in physics called the embedding problem, which states that any high-dimensional surface can be represented inside a sufficiently-large-dimensional flat, or Euclidean, space.

"I can't tell you enough what a difference it made for Rikhil and Carlos to be able to attend the Nash lecture and reception," said Nine Rosete, Executive Director of the Dare to Dream Fund that sponsored Patel and Lemus. "The experience opened up a whole new world of possibilities for both of them."

Even younger future mathematicians in the audience were excited by the celebrated Nobel laureate, especially Adams' daughter Maile (photo), who is about the same age as Nash when he first became interested in mathematics. In one of the greatest ironies of his career, one of Nash's grammar school teachers told his mother that he was "having trouble with math" because he saw new ways to solve existing problems.

Nash's capstone presentation was the third in GSEAS's Nobel Laureate Lecture Series at the Naval Postgraduate School. Winners of the Nobel Prize for Physics Profs. Herbert Kroemer and Charles Townes spoke last October and in January. The next talk in the series will be by Prof. Peter Lax, winner of the prestigious Abel Prize in applied mathematics, known as 'the Nobel of Mathematics' because a Nobel is not awarded in the field.

On his final day at the Naval Postgraduate School, Nash sat for a videotaped interview with Director of Marketing and Communications Alan Richmond, during which the famed mathematician compared NPS with MIT, where he was a mathematics faculty member from 1951 to 1959, Cal Tech and Carnegie Mellon. As Richmond presented Nash with an official NPS pen at the end of the session, he said, "When you're doing your mathematical work, you'll think of the Naval Postgraduate School."

Was Richmond thinking of the ultimate moment in "A Beautiful Mind," the movie about Nash's life, when his Princeton colleagues presented him with their pens, one by one, in the ultimate academic ritual of recognition and honor?

"Actually, I wasn’t," Richmond smiled. "But I wouldn’t be surprised if he was."

For one shining week, in fact, the entire Naval Postgraduate School seemed to be laying its pens before a singular mathematician named John Forbes Nash Jr.