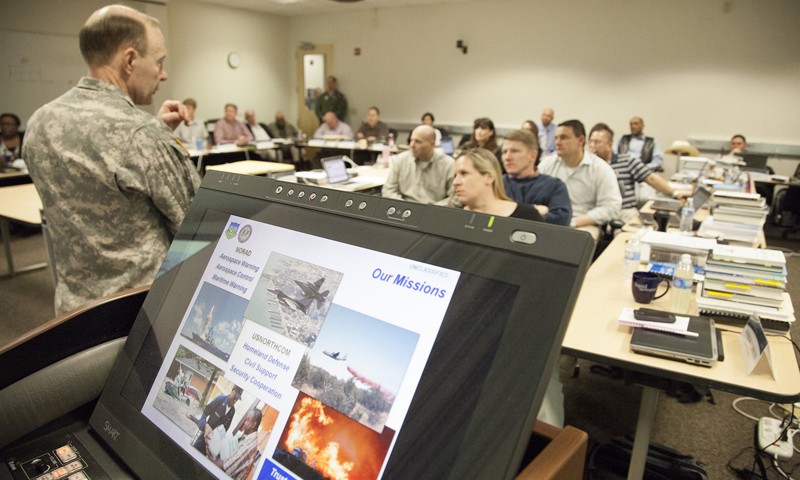 Jacoby spent much of his visit with students and faculty in the university’s Center for Homeland Defense and Security, and expressed his initial impressions of the students, and on education as a whole, during a gathering with the group near the end of his visit.

“This is a great group to have sitting together as a team,” he said. “I am a big believer that if we are down to our last dollar, we should spend it on education.”

In partnership with Canada, NORAD conducts aerospace warning, aerospace control and maritime warning in defense of North America. Jacoby’s visit to NPS, however, was more directly connected to his role as USNORTHCOM’s chief.

USNORTHCOM was established Oct. 1, 2002 to provide command and control of Department of Defense homeland defense efforts and to coordinate defense support of civil authorities.

CHDS’ eclectic student population is a diverse mix of professionals and first responders at local, state and federal levels, and Jacoby recognized the value added by the many perspectives addressing homeland security’s challenges.

“I am very happy that we have this talented group from their respective agencies thinking, collaborating and working together here on homeland security,” said Jacoby.

“We are like a petri dish where different stakeholders can conduct research and grow solutions to our nation’s most pressing homeland security issues,” added CHDS Executive Director Dr. Ted Lewis.

CHDS has been working with USNORTHCOM to provide advanced education to civilian and active duty officers from the command for the last 11 years. Over that span, 29 USNORTHCOM students have graduated from NPS with advanced degrees.

The command, however, has been challenged in recent years to dedicate personnel to the program, one of the reasons Jacoby himself wanted to explore the center. By the end of his visit, he expressed a recommitment to filling his available seats.

In addition to meeting with students and faculty at CHDS, Jacoby met with NPS leadership and received briefings on cutting-edge research and technology programs at the university.

“There is no other institution where we can take our systems and team them up with academics and walk the program down to the user level to the benefit of the warfighter,” said Magram.

In closing, Jacoby expressed a positive review of his time spent on campus, and was committed to continuing the dialogue.

“I hope we will continue to work together,” said Jacoby. “Everything that you are doing here is important to us. I have about a million questions for you, and I look forward to continuing this dialogue.”