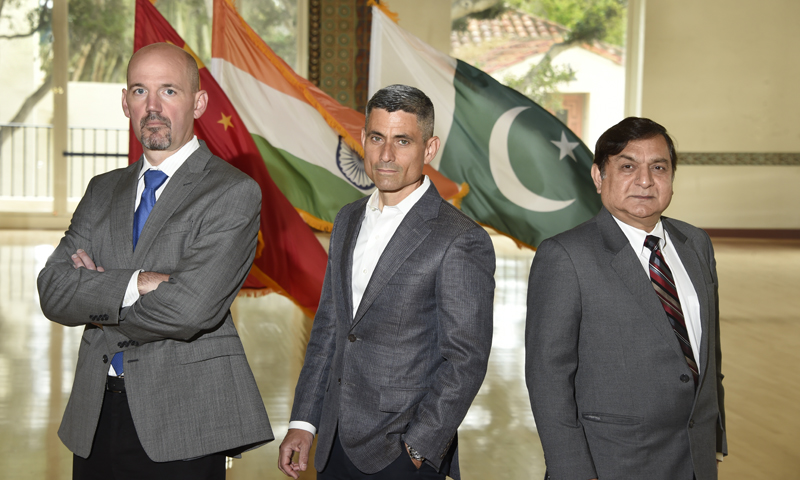 NPS Professors Christopher Twomey, left, and Paul Kapur, center, with NPS Lecturer retired Pakistani Army Brig. Gen. Feroz Khan, right, are pictured in front of the flags of the various nations with whom they have led a series of unofficial, track II, diplomatic efforts.

Unbeknownst to the general public, academics and subject matter experts from universities and think tanks quietly contribute to international diplomacy through what are known as track II talks - informal discussions with foreign states. The Naval Postgraduate School (NPS) has played a central role in these talks with China, India and Pakistan.

The Defense Threat Reduction Agency (DTRA), which is tasked by the Department of Defense with countering weapons of mass destruction, has been funding NPS-sponsored track II talks for over a decade. NPS Professor Christopher Twomey, with the university’s Department of National Security Affairs, has been a part of NPS’ track II talks with China since their inception.

“The meetings are officially unofficial. They provide a means for some back-channel communication that can be walked away from if somebody says something out of turn,” said Twomey. “Nevertheless, they are a useful way of gaining some understanding of the other side and a means to indicate your priorities.”

They are also a forum where academics and policy makers can do early work, like ensuring a common vocabulary between representatives of respective states, when future track I meetings occur through official diplomatic channels.

“We can kind of push the boundaries through diplomacy by other means,” said Twomey.

There are two sets of meetings that occur between the U.S. and China that are funded by DTRA. The first meets most years in Beijing and the other meets most years in Hawaii. NPS, under the leadership of Twomey and NPS Assistant Professor Michael Glosney, manages the Hawaii-based series of talks together with support from Hawaii’s Pacific Forum, part of the Center for Strategic and International Studies.

“We try to build upon ongoing topics at each of these meetings,” explained Twomey. “We work with both regional and functional State and Defense Department policy makers to make sure that we are doing something that is useful to them at the end of the day.”

In the world of diplomacy, official diplomatic contact between nations can be tricky. The mere acceptance of a foreign dignitary or the acknowledgment of the need to hold talks can have political implications. This has been true of Twomey’s area of study, and because there have been few track I discussions between the U.S. and China, there has been an increased interest from key policy makers to conduct unofficial discussions.

“There has been limited, though some recent, track I diplomatic talks between the U.S. and China on nuclear issues. The Chinese have traditionally viewed their arsenal as so much smaller than the U.S.’ that they feel they do not belong at discussions akin to the Russian-U.S. arms negotiations.

“Instead, you fall back to unofficial meetings ... that are purely academic, or somewhere in the middle` that may include academics, policy makers and some officials acting in an unofficial capacity for their respective governments,” explained Twomey.

NPS Professor Paul Kapur has led track II talks with the Indian government. He is a South Asia expert whose expertise in the areas of nuclear proliferation and deterrence is showcased in his, “Dangerous Deterrent: Nuclear Weapons Proliferation and Conflict in South Asia” as well as his co-authored “India, Pakistan and the Bomb: Debating Nuclear Stability in South Asia.”

“The opportunity to participate came along and I jumped in. It’s an interesting intersection between academia and policy,” said Kapur. “It’s very gratifying to be a part of it.”

That opportunity has become increasingly relevant as India and its neighbor Pakistan have engaged in a South Asian arms race that often leads to tension between the two nuclear states and the region.

“We try to create an environment where experts from both sides can exchange ideas in a frank open discussion that can be shared with policy makers,” said Kapur. “The talks are indirect, but we try to inform the policy side as much as we can.”

And while nuclear issues are of great import to all the stakeholders involved, NPS-sponsored talks with India also delve into other areas of shared interest.

“We have also looked at cyber security, common spaces, maritime and space security as well as discussion about how India and the U.S. think about securing nuclear materials,” said Kapur.

“When you hold dialogues and seminars, you get a lot of discussion on major security issues but end up with one or two important points after talking all day.

“For the past couple of years, I have tried a different track. Rather than holding dialogues and seminars, I chose to change the methodology by conducting crisis- simulation exercises involving regional players. This method brings in some outside-the-box practical answers to complex regional security issues,” said Khan.

By conducting crisis-simulation games through Khan’s South Asian Stability Workshops, he has found that it is possible to take a much deeper look into how participating nations conduct diplomacy, implement policy, deploy their militaries and make economic decisions.

“The simulation exercise was designed to reinforce our theoretical understanding of India-Pakistani strategic stability with conceptual clarity. Although track II dialogues and academic conferences have been useful for developing a robust theoretical understanding of strategic stability, the South Asian Stability Workshop provides a laboratory in which theoretical hypothesis can be explored and stress-tested,” explained Khan.

But Khan left the sterile confines of the laboratory long ago. He is deliberately pushing the envelope with his Pakistani and Indian participants in an effort to observe how, or if, participants are able to de-escalate potential crises.

“We try to simulate the interplay of conventional, unconventional and nuclear warfare,” said Khan. “We create a perfect-storm situation.”

Khan notes that into that “storm” each country brings its own preconceived notions and its own diplomatic and strategic objectives.

“We place them into a narrative of their own making, giving them the option to identify the crisis and observe how they react to it over a 72-hour period,” said Khan. “It's a very serious game. The primary focus of my research is determining how nations can de-escalate crises using these tools.”