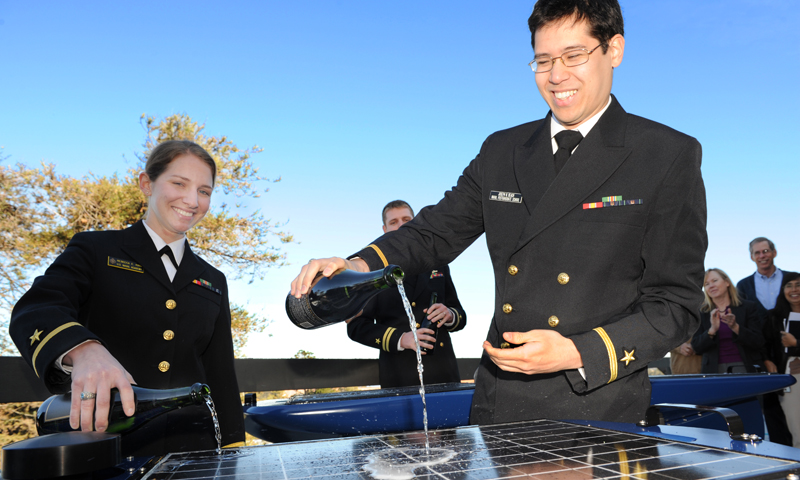 Ensigns Rebecca King, left, and Joseph Beach, right, pour champagne on a new unmanned surface vehicle presented to NPS by David Jackson, Chief Emerging Technology Officer for the Office of Naval Intelligence, during a christening ceremony on the roof of Spanagel Hall, Jan. 11.

Naval Postgraduate School leaders, students and guests gathered on the roof of Spanagel Hall, Jan. 11, to welcome two new unmanned surface vehicles (USVs) to the university’s research community, and to celebrate the establishment of the new Sea Web and Wave Glider Laboratory.

David Jackson, Chief Emerging Technology Officer for the Office of Naval Intelligence (ONI), attended the ceremony on behalf of the ONI, officially presenting one of the Wave Gliders to the Undersea Warfare Research Center. The two vehicles, referred to by the Navy as Sensor Hosting Autonomous Remote Crafts (SHARCs), were appropriately named Tiburon and Mako, and christened with a stream of champagne carefully poured on the crafts.

During the christening ceremony, retired Rear Adm. Jerry Ellis, Director of the Undersea Warfare Research Center, offered confident predictions that the crafts would be invaluable additions to the institution. “I christen you Mako and Tiburon, may you always provide good research for the Naval Postgraduate School and may you always return to your home base.”

NPS has long invested time and research into a wide range of unmanned systems, and the addition of the USVs will only help broaden the scope of the university’s research. Ellis noted that Navy leadership had vowed, only days before, to make unmanned systems a main objective for fiscal year 2012.

“With the acquisition of these wave gliders today and with the opening of the Sea Web and Wave Glider Laboratory in front of me, NPS will be working toward meeting the objective of the Navy and adding to the great work that is already being done here at NPS with unmanned systems,” Ellis continued. “We are clearly doing what the Navy wants us to do in this area, and I think we are doing it very well.”

Jackson followed Ellis’ remarks with a prediction that the Wave Gliders marked the beginning of a long, fruitful relationship between ONI and NPS.

“I see this as an opportunity to renew a partnership between ONI and NPS,” said Jackson. “We’ve had partnerships off and on before, but I really see this as an opportunity here to move forward with technologies. And not just with wave gliders, but with all different types of technology, from cyber and maritime domain … to ISR [intelligence, surveillance and reconnaissance] and obviously national security. And I think that we will yield great dividends in those areas by working together and pooling our resources – both in knowledge and funding.“

Joe Rice, Research Professor of Physics, joined Dr. Phil Durkee, Dean of the Graduate School of Engineering and Applied Sciences, in cutting the ribbon to the new Sea Web and Wave Glider Laboratory, noting how long the program has been without lab space, and the excitement of having a place for research.

“Previously, Sea Web has developed experiments of opportunity around the world. We have done over 50 trials at sea, and that has been our laboratory,” said Rice. “We’re very pleased to finally have a home base here on campus. The lab will provide us some continuity in our research and development. It will support the engineering work on these wave gliders, with ready access to the iridium constellation in the sky by using this deck out here, and by having access to solar energy to power the electronics. Most importantly, having a lab here on campus will provide an opportunity for our students to be more directly involved in the work.”