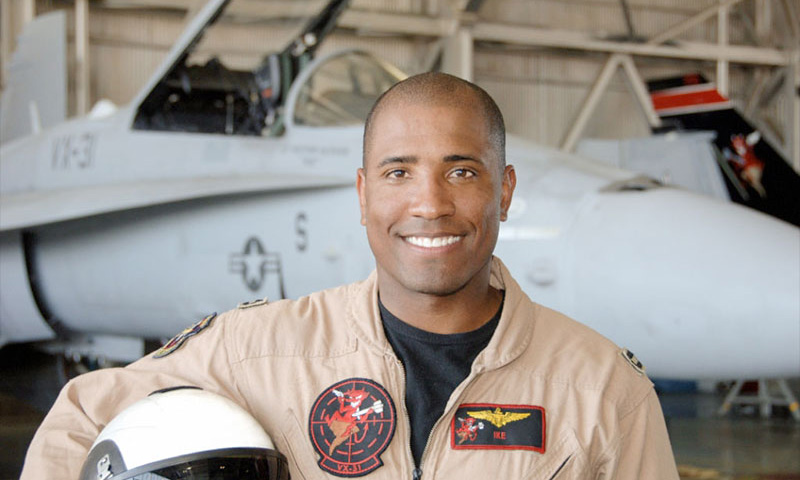 Lt. Cmdr. Victor Glover, a 2009 alumnus of the Naval Postgraduate School, was announced as one of only eight new astronauts by NASA Administrator Charles Bolden, June 17. Glover becomes NPS’ 41st graduate to become a NASA astronaut, more than any other postgraduate university in the world.

When NASA Administrator Charles Bolden announced the latest class of NASA’s eight astronaut candidates, June 17, the Naval Postgraduate School (NPS) was able to add yet another space-traveling alumnus to its ranks, now totaling 41 and counting.

Lt. Cmdr. Victor Glover, an F/A-18 combat pilot currently serving as a Legislative Fellow in the office of Senator John McCain, was selected from more than 6,100 applicants to begin training at Johnson Space Center in August for potential space flight. Glover graduated from the Naval Postgraduate School in 2009 through the Master’s of Systems Engineering Management – Product Development 21st Century (SEM-PD21) program, in addition to receiving a space systems academic certificate in 2005, both via distance learning.

Glover notes the two programs, while both very different, provide a tremendous foundation for the challenging training that lies ahead of him.

“Certainly, the space systems certificate program is directly applicable,” Glover said. “It gives you the basics of communications, orbital mechanics, imaging systems … things that are very relevant to the processes of manned space exploration.”

But, he continues, his experience in the SEM-PD21 program provided an immediate payoff to his position in the Fleet.

“I was a test pilot, working in the systems engineering field, actually doing test and evaluation under the umbrella of weapons systems acquisition,” Glover said, emphasizing the direct relationship between his studies and work assignments. “My work product bolstered my school product, and likewise, my school product improved my work quality.”

“Systems engineering has really emerged over the last several years as a critical discipline for the development of systems that meet the needs of the warfighter,” added Dr. Cliff Whitcomb, NPS Department of Systems Engineering Chair. “Whether it is in test and evaluation, development, or in life cycle sustainment, it’s an engineering discipline that provides students, especially at the master’s level, with a very holistic, balanced perspective.”

Not only did the coursework provide an immediate payoff, but its simple availability to Glover was equally as valued.

“The thing that was really amazing about both of these programs is that they are distributed, and they allowed me to continue my professional development through advanced formal education where I was stationed,” he stressed. “I actually did the space systems certificate while I was deployed to the Middle East flying combat missions off the USS John F. Kennedy.”

"Lt. Cmdr. Glover completed our space systems certificate program back in 2005, and I am very pleased to see he will be able to apply some of what he learned to his ambitions in space flight,” added Space Systems Academic Group Chair Dr. Rudy Panholzer. “As a Navy pilot, it is very challenging for these officers to remove themselves from the cockpit to obtain a valued, educational experience in the classroom … This is precisely why we ensure our programs are available remotely, and in the more condensed format of our academic certificates."

Although a few years removed from his time at NPS, Glover was recalled by his former advisers and teachers as an overachiever.

“I remember Victor Glover as an exceptional student in the product development 21st century (PD-21) curriculum,” noted Dr. John Osmundson, a Research Associate Professor in the NPS Department of Information Sciences and co-advisor on Glover’s thesis. “He was extremely enthusiastic and always produced very high-quality, technical work. It was clear from his interactions with the rest of his PD-21 cohort that Victor was a natural leader. He had an outgoing, engaging personality and always integrated the rest of the students in course discussions and project work.”

Glover says that while he is eager to get started on his training, he is also still trying to absorb the reality of his accomplishment.

“It still hasn’t completely set in that this is really happening. It’s an amazing opportunity professionally, and personally. This is an amazing group of people that I have been selected to join, and it truly is overwhelming on so many levels,” Glover said.

“The next achievements in space will require a great deal of work by many of us selected now,” he continued. “I am happy to be associated with the accomplished and capable people that are going to be a part of making that happen.

“My 15 years in the Navy have been different every year, but it has definitely been an enchanted journey and I have cherished every opportunity,” he added. “Somebody else must have been in control of this other than me, because it has led me to some amazing places.”