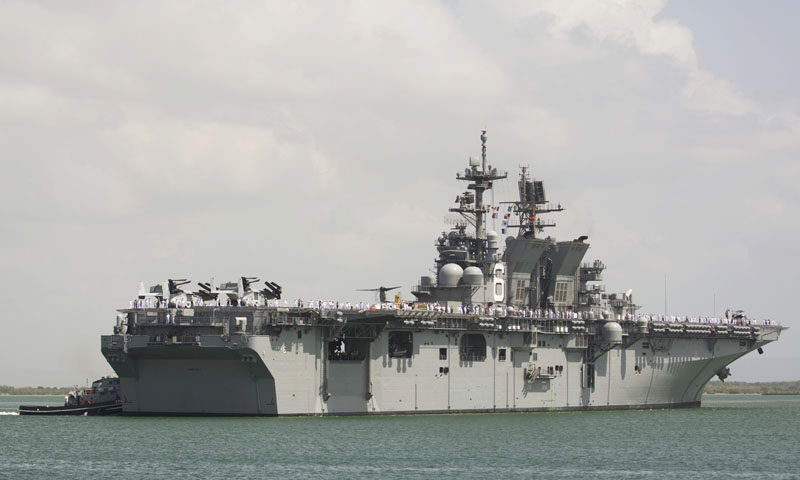 The Navy’s newest amphibious assault ship, USS America (LHA 6), is pictured while pulling in for one of several port visits and training engagements with partner nations throughout North and South America while transiting to its homeport of San Diego in mid-2014.

USS America, the first of the America-class amphibious assault ships, is an engineering wonder. With a displacement of 45,000 tons, the America is as large as many allied nation aircraft carriers. Her wonder extends within her hull as well, supported by a technologically-advanced “green” power plant that is projected to save an average of $15 million in fuel costs every six months. And when the Navy looked for leaders to take the America’s helm, it chose graduates from the prestigious Naval Postgraduate School (NPS) in Monterey, Calif.

NPS graduate Navy Capt. Robert A. Hall, Jr., is America’s commanding officer. He earned a degree in mechanical engineering at NPS and served two tours as chief engineer on two different ships before being selected to serve aboard America.

“The America is a very complex system with engineering systems throughout. My engineering background really helps a lot,” he said.

“Going to NPS gave me a broader perspective of the Navy. You get to spend time with officers from different communities, different services and international students; it really helps you to broaden your horizons. I highly recommend it to all of my junior officers,” Hall continued.

“Capt. Hall was an excellent student at NPS. He conducted his MSME [Master of Science in Mechanical Engineering] research program in the area of materials and processes and completed a thesis entitled ‘Sensor Development for Intelligent Processing of Age Hardenable Aluminum Alloys … supported by the Naval Air Systems Command,” recalled McNelley.

“His contribution involved the design of eddy current sensors and an experimental demonstration that these devices were capable of continuous monitoring of the properties of aerospace aluminum alloys during processing,” continued McNelley. “The overall effort was also pertinent to the development of sensors to assess material properties and facilitate development of condition-based maintenance procedures.”

Challenging indeed, but Hall says he fondly remembers his time studying beneath McNelley.

“He was a great guy, he pushed me when I needed it and helped me to think outside of the box,” said Hall. And it is that sort of thinking that Hall relies upon as he guides the Navy’s most advanced amphibious ship in the fleet. He speaks with visible pride when discusses his ship and the technology that propels it through the world’s oceans.

“The USS America’s [power] plant is a hybrid system. We have an auxiliary propulsion system attached to our reduction gear that allows us to run our shafts at 12 knots and below using only electrical power run off our generator. That helps us save a significant amount of fuel,” explained Hall.

“We are different from other LHA’s [Amphibious assault ships], we don't have a well-deck, instead we have a much larger hanger bay. Our focus is to support the latest in Marine Corps aviation, the Joint Strike Fighter F35B, and MV22 Ospreys. The larger hanger bay offers greater maintenance capacity which allows us to stay on station longer and use [our aircraft] to their utmost capacity,” he continued.

Hall also spoke about his naval career and the people with whom he serves.

“Of course there are challenges and rewards with everything you do, but for me, the Navy offers far more rewards than challenges … In my 26 years in the Navy I have never been bored a day in my life. It’s been an exciting ride, whether in port or at sea. There are always things going on,” said Hall. 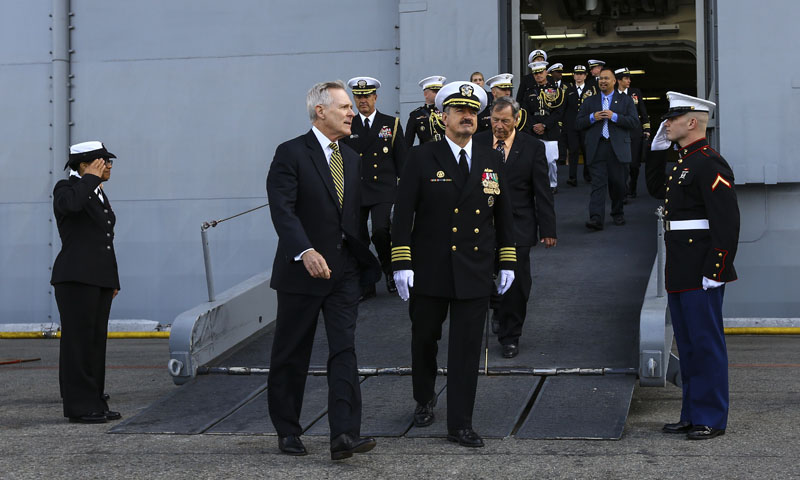 “Attending NPS increased my loyalty to the organization [Navy] as a whole, because I think if we value our people we want them to develop personally and professionally and part of that is education,” said Baze. “The Navy offers you wonderful opportunities, like the ability to go get a master’s degree, and the fact that the Navy wanted me to do that and that it took the time and spent the money to give me a top quality education meant a lot to me and its part of why I decided to stay.”

“The individual courses, and the curriculum as a whole, have influenced me because I do not just see myself as an officer in the Navy, I see myself as a scientist for the Navy as well. I think having those two backgrounds … provides value and a unique perspective.”

“Many of the tools that my forecasters and I use underway … to generate our forecasts are very complex,” continued Franklin. “When you’re floating around in the middle of the ocean in a $6 billion machine, it’s probably a good investment to make sure that at least one person on board understands those tools.”

Franklin studied under NPS Associate Professor of Meteorology Qing Wang. He hopes to return in the future to pursue his doctoral studies with her.

“Professor Wang was definitely influential to the way I approach problems,” said Franklin. “Any chance that I get an opportunity to speak to someone who is interested in science and engineering, I try to be a good ambassador for NPS and share some of the opportunities that NPS has to offer.”

“NPS was definitely a useful tool for my professional development,” Duke said. “One of the tools that I took away was access to the Dudley Knox Library. It has a plethora of different information and websites … it’s free information that you would not necessarily be able to get if you did not go to NPS.”

“There are a lot of graduate programs out there, but NPS is definitely one of the better programs. In addition to getting your graduation education, you also have the opportunity to get your Joint Professional Military Education (JPME) phase one certification through the Naval War College [Monterey] that is co-located there,” she continued.

Duke also pointed to the Navy’s recent utilization of NPS for enlisted members through its Master of Science in Applied Cyber Operations (MACO) program. MACO, partnered with the Master of Science in Cyber Systems and Operations for the traditional officer student, is working to arm a broad range of Navy personnel with the tools necessary to participate in cyber operations. And it offers a rare opportunity for active duty enlisted Sailors to pursue graduate education.
Categories Navigation
NPS Departments/Academic Groups
Schools
Type
News Archive TodayatNPS Title