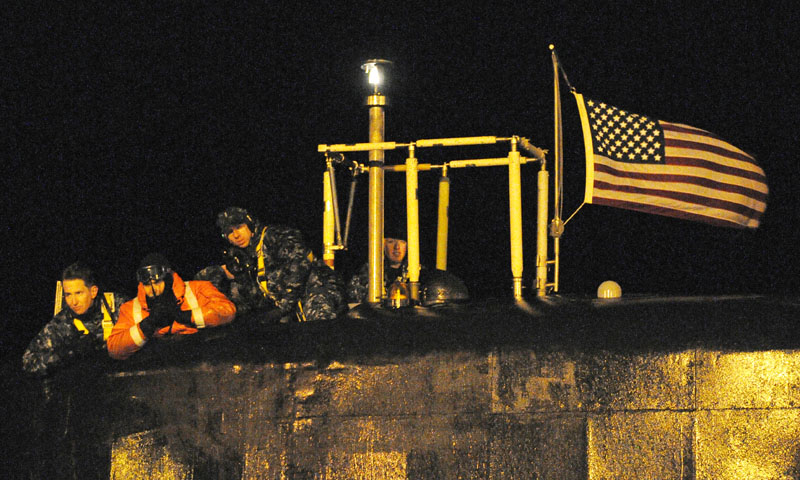 Naval Postgraduate School alumni, Navy Cmdrs. Richard N. Massie and Leif E. Mollo, have been selected to receive the Navy’s coveted Stockdale Award for Inspirational Leadership, and will be honored during a Pentagon ceremony later this Fall.

Following Navy tradition, both men were nominated by peers who themselves were eligible for the Stockdale Leadership Award.

Massie, the Pacific Fleet winner, is currently deployed aboard the USS Maine (SSBN 741 - Gold) where he serves as commanding officer. He was recognized for his commitment to command excellence, and his efforts in support of the integration of women into the submarine force.

Writing from “somewhere beneath the Pacific,” Massie discussed the need to meet with each of his Sailors individually, and the three principles that he shares with them during this face-to-face discussion.

“First, treat every person with dignity and respect … We all need to pull together toward our common goals. Alienating an individual for some perceived difference is counter to these goals,” said Massie. “Second, everybody must act with integrity.  Our business is too difficult and too dangerous to have anything less. We must be able to trust each other 100%.

“Finally, we all must be focused on the mission. [Everything we do] contributes to the larger mission and the security of the United States,” he stressed.

Lt. Ryan Hilger, a current student at NPS, served under Massie before beginning his studies.

“Its fantastic that he received this award. We faced a lot of challenges while I served under his command, but we accomplished some amazing things including a meritorious unit commendation … We really did something special,” said Hilger. “I was there when women were first brought on board. It was a non-issue. He treated us like adults and expected us to treat our female colleagues as the professionals they that were.”

Mollo, the Fleet Forces Command winner, is the former commander of the Navy’s elite, Seal Teams Four and Eight.

“It is a great honor and also extremely humbling to receive this award. The example and standard of leadership that Admiral Stockdale set is one we can only hope to live up to,” said Mollo.

“This may be an individual award, but in my case, I believe the real recognition and credit should go to the members of the commands that I was fortunate enough to lead,” continued Mollo. “Their dedication, courage, and perseverance were absolutely inspiring to me and it was an honor and privilege to be their commander.”

Mollo reflected on his time at NPS and the perspective that it provided him as he deployed to some of the most world’s most troubled regions.

“My time at NPS gave me valuable perspective; whether it was perspective on life and family, or perspective about the world and environment into which I was deployed in our nation's service. This perspective has been priceless, and I will forever treasure the time I spent at NPS,” said Mollo.

“NPS’ Defense Analysis/Special Operations-Low Intensity Conflict (SOLIC) curriculum expertly focused on education that proved to be of great practical use during my subsequent tours,” continued Mollo. “I found myself constantly applying what I learned in a variety of environments, whether it was overseas working with foreign counterparts, in a leadership position at a NSW [Naval Special Warfare] command, or while serving on a joint staff.”

The Stockdale Award for Inspirational Leadership is presented annually to two commissioned officers, O-5 and below, that are in command of a single ship, submarine, aviation squadron or operational warfare unit. It was established in honor of Vice Admiral James Bond Stockdale.