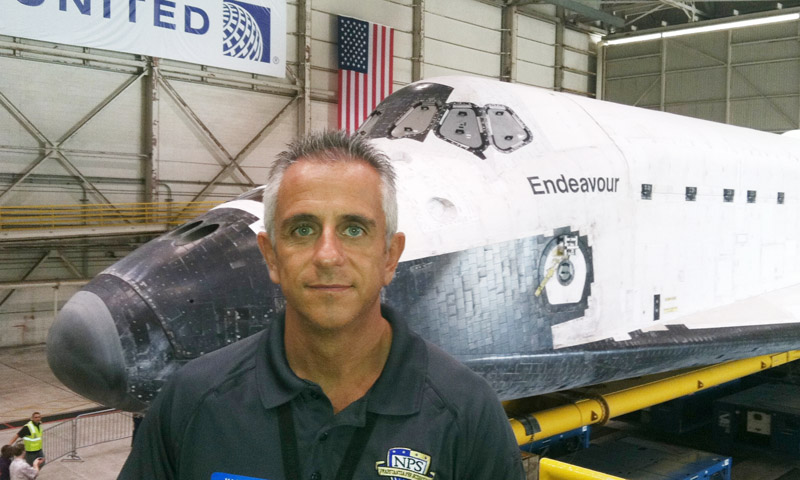 NPS CHDS alumnus, Inglewood Police Lt. James Madia represented his department as planning coordinator and event commander for the transport of the Space Shuttle Endeavour through the streets of Inglewood on its way to the California Science Center. Endeavour’s journey required collaboration across 30 agencies, something that Madia's CHDS studies had prepared him for well.

A 96-hour work shift with the whole world watching.

“You are essentially driving a five-story office building down the street,” said Madia. “It wasn’t like the Rose Parade.”

Madia, a 2011 master’s degree graduate of the Center for Homeland Defense and Security (CHDS), was the planning coordinator and event commander as the shuttle traversed Inglewood on a six and one-half mile trip that included two ceremonial stops within the Southern California city. For that responsibility, Madia was well-prepared. The university’s CHDS degree program is dedicated to giving local, state and federal officials the strategic and operational tools for improving homeland security preparedness and interagency cooperation for challenges large and small. And as anyone involved in moving the Endeavour to her new home would agree, multi-agency collaboration, and detailed planning were key to the success of the operation.

On top of the typical crowd and traffic control planning that comes with a large-scale event, Madia had to manage inter-agency collaboration and homeland security issues associated with a high-profile display of a symbolic national icon. Snipers and bomb detection dogs were included in the planning to address potential high-impact, low-probability incidents.

“Clearly, when you are working a large-scale event the main issues are going to be crowds and streets,” Madia said. “We were also moving a national treasure, a symbol of America. It was at least a little likely that a terrorist would like to use the symbolism of the day to hurt people.”

Madia coordinated the move with the neighboring Los Angeles Police Department. The plan was for Inglewood to oversee security as the shuttle left the area east of the Los Angeles International Airport to the Forum, at which point the LAPD assumed responsibility. Unlike the LAPD, however, Inglewood’s smaller staff meant Madia had to become an instant expert on an array of minutia.

“Part of what made my job different is because of size of our organization, we don’t have 10,000 officers like Los Angeles,” he recalled. “I had to be intimately involved with all aspects of the move. I could not afford to specialize in one area.”

That meant working with more than 30 public and private agencies ranging from the California Highway Patrol to the region’s electricity provider, Southern California Edison. All of Inglewood’s city departments, such as Public Works and Parks and Recreation, were mobilized for the job. On the day of the event at the Forum there was mutual aid from local and federal police agencies as well as detection dogs provided by Amtrak Federal Police.

Perhaps most daunting was the delicately choreographed process that kept the shuttle moving while Edison de-powered transmission and distribution lines and a company positioning steel plating on the street to protect the asphalt on the streets.

“As the shuttle is approaching there is an orchestrated dance,” Madia said. “Edison de-energizes lines. They had to lift the lines on cranes and get them de-energized so the tail could pass.”

As the shuttle approached the Interstate 405 overpass, a change in transportation techniques took place. The 300,000-pound load for the most part was transported by a self-propelled modular transporter, a platform equipped with a grid of several dozen computer-controlled wheels each able to swivel independently. That helped the shuttle navigate the streets and neighborhoods as it sped at 2 M.P.H., but the California Department of Transportation was not satisfied that method would adequately distribute weight equally on the overpass, potentially causing damage.

So, before crossing the bridge that shuttle was transferred to a more traditional beam-and-dolly system. Crews basically raised the mobile transport, moved the dolly under it, and moved it across the bridge – with an estimated 5,000 people watching.

With the beam and dolly in place, Toyota was ready to optimize its relationship with the California Science Center by shooting a commercial of its Tundra pickup truck towing the shuttle.

“It was amazing,” Madia said. “Five thousand people at that intersection let out a holler like it was a USC football game.”

Madia cited his CHDS education as “immensely” beneficial in terms of planning, collaboration and preparedness for terrorists acts.

“I can’t tell you how much I thought about CHDS through the whole process,” he said. “All the discussion about strategic planning, all the awareness about homeland security issues came to mind, particularly the work we did with agency collaboration.”

In his 28-year career with the Inglewood Police Department, Madia has spent the last 10 as the commanding officer of the department’s Emergency Response Team, which included command of 43 major events.

“Nothing I have done in the past ten years compares to this,” he said. “It was so much bigger than I thought it would be.”