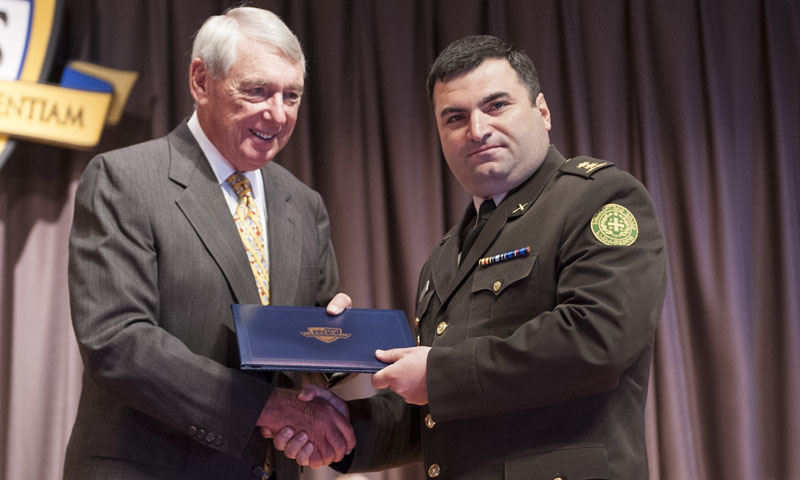 NPS alumnus Georgian Army Col. Giorgi Jachvadze is congratulated by commencement speaker retired Adm. Henry Mauz during the 2013 Winter Quarter Graduation Ceremony. Following his graduation from NPS, Jachvadze has spent the past several months leading a series of reforms within the Georgian Ministry of Defense (MOD) that overhauled his nation's military personnel system, and he directly credits his NPS education for providing the knowledge to do so.

Naval Postgraduate School (NPS) alumnus Georgian Army Col. Giorgi Jachvadze has managed a series of reforms within the Georgian Ministry of Defense (MOD) that have effectively overhauled the Georgian military personnel system, and directly credits his NPS education in the Graduate School of Business and Public Policy for giving him the knowledge to make the aggressive changes.

“My NPS experience created significant preconditions for all of these accomplishments and my NPS classes and thesis played a significant role in the success of these reforms,” he added. “The knowledge and skills that I acquired at NPS introduced me to materials, practices and methods that helped me to decisively elaborate and implement the ideas and projects that led to these successes.”

“[Jachvadze] led the implementation of many reforms outlined in his thesis, ‘Quantitative Analysis in the Georgian Armed Forces Manpower/Personnel Policy Decision Making Using Markov Models.’ These reforms have been integral to advancing [Georgia] on its path to NATO membership,” said Hatch.

“This is a huge deal for Georgians, and a strategic imperative for the U.S. given Russia’s aggressive expansion in recent years,” he added.

Jachvadze completed NPS’ Manpower Systems Analysis curriculum in the university’s Graduate School of Business and Public Policy (GSBPP). Upon graduation, he returned to Georgia where he was selected to lead the J1 Personnel Department of the General Staff of the Georgian Armed Forces (GAF).

The Georgian J1 Personnel Department is responsible for manpower and personnel issues, including among other things, pay, allowances, and promotions throughout the GAF. The J1 also works with the Ministry of Defense’s Human Resource Management Professional Development Department to implement personnel policies within the GAF.

One of the most successful of the reforms led by Jachvadze was a MOD transition to a pay-by-rank compensation system.

“Before transitioning to a pay-by-rank system, a large portion of GAF military personnel’s basic pay, about 95 percent, was defined by the position they held, and only about five percent was related to their actual rank,” explained Jachvadze.

According to Jachvadze, transitioning to a pay-by-rank system was important because the prior practice, which offered compensation based upon position, created an improper set of incentives and hampered the ability of the GAF to implement a Western-style military personnel system.

Transitioning to a pay-by-rank system to align with NATO standards has been one of the Georgian MOD’s top priorities for the last decade, but formidable resistance to change within the MOD caused previous transition attempts to fail, said Jachvadze.

After years of failed attempts, the Georgian J1, under Jachvadze, and with support from MOD leadership, was able to successfully make the transition.

“Extensive work was done over a one-year-period to implement the change,” said Jachvadze. “After careful analysis, an action plan for transition to a pay-by-rank compensation system was approved and alternatives, with supporting calculations, were presented to leadership for decision making.”

The plan was followed by a concerted effort to communicate the need for change and to explain the path forward. Jachvadze led informational briefings throughout the MOD in nearly every command and unit within the GAF in an effort to overcome resistance to the transition and to explain its merits.

“The transition to a pay-by-rank compensation system was a huge success for the MOD and it was recognized and appreciated by NATO partner countries,” said Jachvadze.

Yet the transition to a pay-by-rank system was just one of many reforms overseen by Jachvadze and his staff. Under his leadership, the MOD has also implemented key reforms in the areas of promotions, selection board processes, recruitment and retention systems, pre-enlistment psychological screenings, and military pay and compensation.