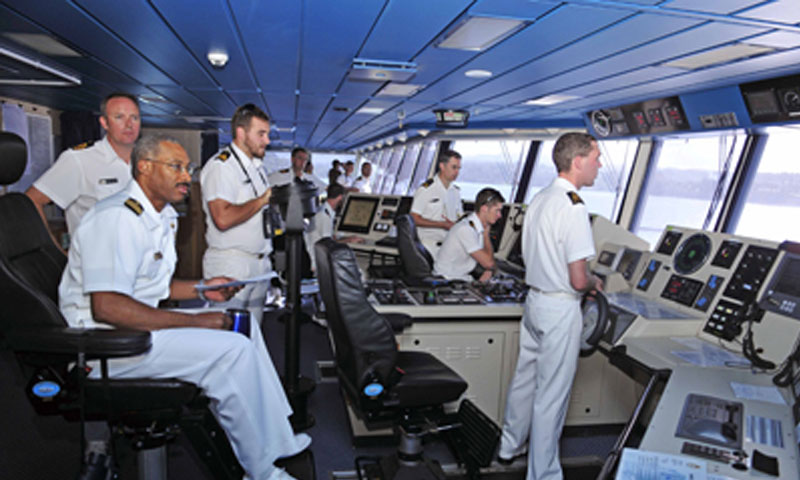 Capt. Jesse A. Wilson, commander of Pacific Partnership 2011 and commodore of Destroyer Squadron 23 (DESRON 23), sits in the captain's chair aboard the New Zealand navy multirole vessel HMNZS Canterbury (L421) during a sea and anchor detail in Port Villa, Vanuatu.

When the Pacific Partnership 2011 (PP11) Team completed the final phase of its five-month mission, July 15, Mission Commander Capt. Jesse Wilson reflected on the U.S. Pacific Fleet-sponsored humanitarian assistance mission, and the role his 1991 master’s degree in Operations Research from NPS played in helping him execute the diverse requirements of this critical mission.

“Pacific Partnership is important because the mission builds and strengthens relationships in the region while enhancing our collective ability to more effectively respond to any natural or manmade disaster,” noted Wilson. “Additionally, the sustainable projects we complete side-by-side with host nation personnel will increase quality of service and quality of life for the citizens of the countries; all of which will be conducive to increased security and stability in the region.”

Under Wilson’s leadership, the joint multinational team, comprised of units from the U.S. Army, Navy, Marine Corps and Air Force, worked alongside military representatives from New Zealand, Australia, Canada, Japanese Maritime Self Defense Force as well as various NGOs to treat more than 36,000 patients, care for more than 1,500 animals, conduct more than 40 community service projects and complete more than 20 engineering projects in the Pacific nations of Tonga, Vanuatu, Papua New Guinea, Timor-Leste, and the Federated States of Micronesia.

According to Wilson, many of the insights gleaned from his studies at NPS directly affected the planning and leadership he provided to the force.

“Almost every day my NPS experience influences what I do. In the military we operate in a resource-constrained environment related to time, space, forces and money,” said Wilson. “The analytical framework and methodical approaches to problem solving I learned in the Operations Research program at NPS have been extremely valuable in helping me plan and execute missions throughout my Naval career.”

Wilson also went on to detail the importance of continuing education, even beyond what he learned while earning his OR degree, as integral to remaining relevant and effective in today’s diverse military service.

“First of all, to remain relevant you can never stop learning. The world is changing too fast. More importantly, I believe when you combine additional academic rigor with practical experience, the result is more impactful than if you relied solely on one or the other,” he added. “I returned recently to attend the Strategic Communication Workshop at NPS, and that has had a direct impact on this current Pacific Partnership 2011 mission. Our team adapted what was taught in that workshop to the execution of key Pacific Partnership mission objectives.”

Offering a unique blend of joint military perspectives with world class faculty, Wilson notes his studies at NPS helped to keep him operationally relevant, and would recommend the experience to any military officer with the opportunity to attend. 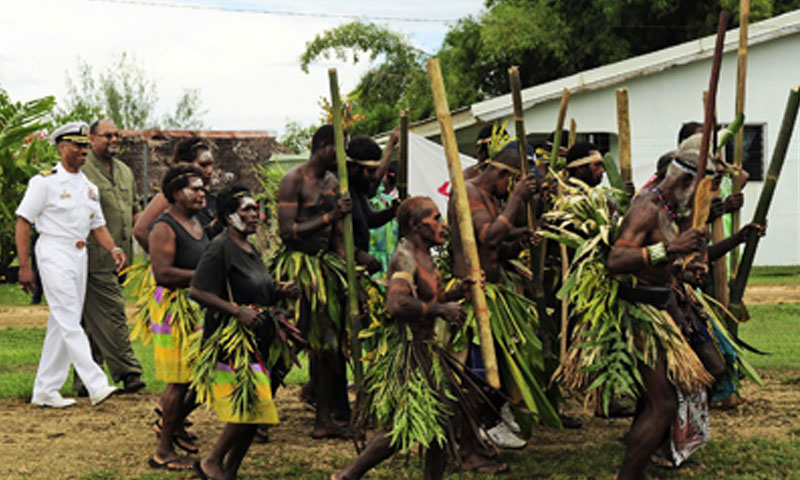 Capt. Jesse A. Wilson, is escorted into the Nakamal Chief Lodge by ni-Vanuatu customary dancers during the opening ceremony for the Vanuatu phase of Pacific Partnership 2011.

“You can see things in the classroom that you couldn’t see before. You can also bring back the perspective of how the knowledge is applicable to current operations and that keeps the institution as a whole from becoming stagnant,” Wilson noted. “NPS provides a rigorous education by offering a dynamic curriculum with terrific faculty and amazing cohorts of students with diverse military backgrounds. It’s a chance to work amongst the best and brightest in the military and academia.”

In addition to providing training and needed resources to key countries in the Pacific region, PP11, also supported U.S. initiatives by keeping military forces poised and trained to respond in emergency situations and the initiative directly supports a key element to the nation’s Maritime Strategy.

“Humanitarian Assistance and Disaster Response is a core mission area of the three sea services as spelled out in our Maritime Strategy,” noted Wilson. “Like any other mission area, we train to be able to execute when the order is given. ”

PP11 also provides an opportunity for the U.S. military to hone skills and operational procedures with key coalition allies.

The Pacific Partnership mission was born out of the aftermath of the 2004 tsunami, which devastated Indonesia. Following that mission, Pacific Partnership began in 2006 and has gone to many countries in Southeast Asia and the South Pacific, treated more than 240,000 patients, and continued to enhance interoperability with partner nations.

Wilson is also a graduate of the Naval War College, where he received a Master’s of Arts Degree in National Security and Strategic Studies in June 2001. Additionally, in 2007-2008 he was a Massachusetts Institute of Technology Seminar XXI Fellow and is a graduate of the Navy Corporate Business Course at University of Virginia Darden School of Business. His personal awards include the Legion of Merit, Defense Meritorious Service Medal, Meritorious Service Medal, Navy-Marine Corps Commendation Medal with four gold Stars, Joint Service Achievement Medal, and the Navy Achievement Medal with one gold star.