NPS Alumnus Meets the Recipient of His Bone Marrow Donation

NPS Alumnus Meets the Recipient of His Bone Marrow Donation 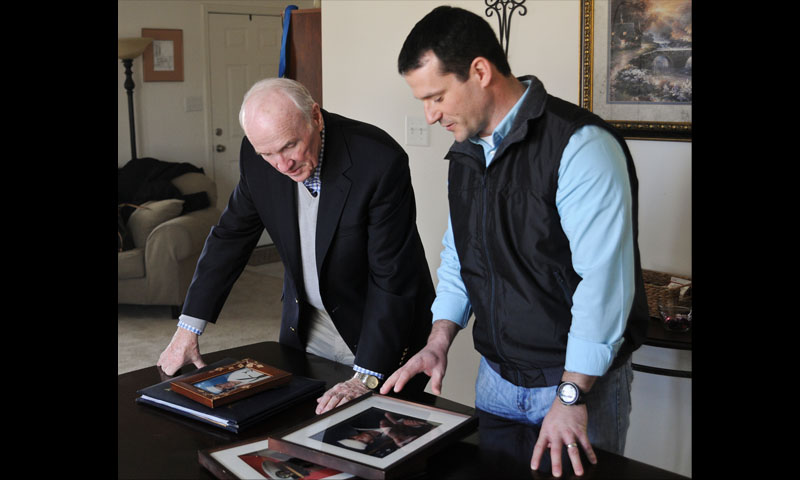 Eric Priest carefully removed the paper wrapping from a small box and wordlessly inspected the pewter clock inside and the words engraved on the surface: “Eric Priest, Thanks For Adding Time To My Life. Phil Jones July 4, 2012”

Priest is a lieutenant in the United States Navy and is the deputy director for reserve general officer accessions for Navy Recruiting Command in Millington, Tenn. He is also registered with the C.W. Bill Young Department of Defense (DoD) Marrow Donor Program.

On March 8, 2014, Priest met Phil Jones, the 75-year-old recipient of his bone marrow transplant for the first time more than a year after the successful procedure.

“I was nervous, a little anxious and excited as well [to meet him] and see how he was doing,” said Priest.

The story of how their lives became linked forever began with a phone call. Priest received the call from the DoD Marrow Donor Program saying he was a possible match for a patient and they needed a blood sample for further testing to find the match with a highest probability for success.

“This was the 3rd time I had been called for a sample and both times I wasn’t the closest match, so I didn’t expect anything different,” said Priest.

Priest was in Monterey, Calif., when he was given the news: “you’re the best match for this patient.”

Priest was given very little information on the potential recipient. Even after the procedure, it was policy that both parties’ identities would be withheld and communication is not allowed until one full year after the procedure.

Priest was only aware of similar information: the recipient is a 75-year-old male that has been diagnosed with myelodysplasia. He had no idea of the unique situation Jones was in.

Myelodysplasia is a blood-related medical condition that effects the development of specific blood cells caused by progressive bone marrow failure.

“When I was diagnosed, I was only given 1.5 years to live and Medicare does not cover transplants for individuals over 65 years old,” said Jones.

Outside of his age, Jones was an excellent candidate for the bone marrow transplant he needed.

“I was rejected,” said Jones. “A world-renowned cancer institute in the United States said ‘nope, you’re too old.’”

In July 2012, the DoD Marrow Donor Program flew Priest and his wife to San Diego to begin the process of his transplant.

“We didn’t pay for anything out of pocket,” said Priest. “They paid for all of our meals and we stayed in a hotel right on the golf course.”

Despite many misconceptions about the process of donating bone marrow, it is a relatively simple procedure with minimal pain for the donor. Advances in technology have done away with the feared needles drilled into the hip to collect the marrow.

Peripheral Blood Stem Cell Transplants filter the cells from the bloodstream. Four to five days before the procedure, patients are given injections to increase the number of stem cells produced in the bone marrow. The extra cells then collect in the bloodstream which can then be filtered from the blood using a machine, according to the National Cancer Institute.

Some of the side effects can include bone pain, stiffness or soreness, and headaches.

“By the third day I had a minor headache, but that was probably because I couldn’t have any coffee,” said Priest.

During his injections, Priest was able to function as he normally would. I was visiting the beach and going on 3-5 mile runs. The only restriction was no contact sports, said Priest.

“Honestly, it was a vacation,” said Priest. “I couldn’t believe people wouldn’t want to sign up.”

During this time, Jones was at Moffitt Cancer Center in Tampa undergoing chemotherapy to destroy what was left of his marrow in preparation to receive Priest’s stem cells.

Despite his fragile condition and the side effects from chemotherapy, Jones’ recalls the process with a positive outlook.

“I tried to imagine who this person [his donor] was, you know, does he have a lot of hair,” said Jones.

After the procedure, the donor and recipient must wait one year before knowing each other’s identity or communicating back and forth.

Priest was given limited information about his recipient’s health.

“They would call periodically to check on me and would let me know the transplant went well and he is doing well,” said Priest.

Almost exactly one year after the procedure, both Priest and Jones signed consent to release their information to each other and it didn’t take long for Priest to receive a letter from the man who now carried around his bone marrow. Both families have been in touch since that time and their meeting was something both looked forward to.

“When we first meet, I’ll probably give him a hug,” said Priest. “I think I promised his wife a hug too.”

Holding true to his word, when Jones and his wife met Priest and his family at their home in Millington, Tenn., March 8, they exchanged hugs and Priest made sure to give Jones’ wife a hug.

Both families spent time connecting and sharing each other’s stories and experiences of the process that they had previously only wondered about.

The tone of the meeting remained joyful even sharing a few jokes about Jones having a younger man’s blood.

Jones shared with Priest and his family that because of the sacrifices they made, his condition is now in complete remission and since his success, two other transplants have now been completed with older patients in the U.S.

“Growing up a Christian, you have a sense of service,” said Priest. “This was another way for me to serve others.”

During their conversation Jones asked Priest if he would do it again.

“Absolutely, I’d do it again in a heartbeat,” said Priest.