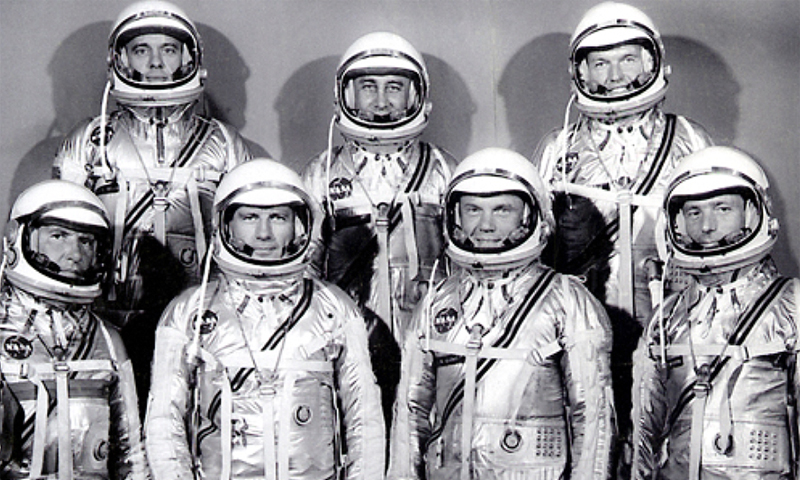 Mercury 7 astronaut and NPS alumnus retired Navy Cmdr. M. Scott Carpenter passed away Thursday, Oct. 10, from complications related to a recent stroke. A graduate of NPS' General Line School in 1959, Carpenter was the first university alumnus selected to be a NASA astronaut, and became the second American to orbit the Earth aboard the Aurora 7 in 1962.

Carpenter is best known for his selection as one of the original seven astronauts selected for the Mercury Program, which also included Walter M. Schirra, Donald K. Slayton, John H. Glenn, Alan B. Shepard, Virgil I. Grissom, and L. Gordon Cooper, Jr.

"Scott Carpenter embodies the perseverance and determination of America's early manned space flight program, and I believe the unending resolve to send Americans into orbit during this era is nearly as remarkable as the achievement itself,” said NPS Space Systems Academic Group Chair Dr. Rudy Panholzer.

On May 24, 1962, Carpenter would cement his place in national history forever when he piloted the second American manned orbital space flight aboard the craft he dubbed the Aurora 7 through three revolutions of the Earth, reaching a maximum altitude of 164 miles.

“It was a cherished experience,” said Carpenter in a past interview. “I got the chance to see the inner workings of the grand order of things. In the overall scheme of things, it proves that men can do about anything they want to if they work hard enough at it.”

“Carpenter was at the heart of the beginning of a new era in space – human space flight,” said NPS National Reconnaissance Office Chair Professor Dan Bursch, a fellow NASA astronaut completing four missions in space. “This represented an important crossroads in our space program when we didn’t fully understand the implications and possibilities of launching humans into orbit.”

While Carpenter is more than a half-century removed from his current student peers, SSAG leadership point to his commitment and resolve as one of the most important lessons of the iconic astronaut’s legacy.

“Our university has seen more than 40 alumni go on to become NASA astronauts, spanning every space program from the original Mercury 7 through the final flights of the Space Shuttle,” said Panholzer. “Throughout that time, the focus of our education and research programs has evolved to match the needs of the Navy and the Department of Defense.

“But as our current students apply this very different education, Carpenter and his Mercury program colleagues serve as outstanding examples of what can be accomplished when we commit to those ideals," continued Panholzer.

More than 47 years following his historic flight, Carpenter shared memories of his time at the Naval Postgraduate School during a teleconference with current students and faculty from NPS' space systems operations and engineering curricula.

“Academia is a great place to be, which is what made my time at the Line School among the most pleasant memories I have of the Naval service and one that I will always treasure,” he recalled.

Bursch notes that he sees a correlation between the space program of Carpenter’s era, and the current transition of American space exploration.

“In a similar fashion, our space program faces another crossroads today,” Bursch said, pointing to the emergence of commercial space flight, the evolution of small spacecraft and cubesats, for which NPS has a highly-active research program, and the emphasis of looking beyond Low Earth Orbit.

“What remains a constant, however, is the importance of graduate education as a key to navigating these crossroads,” Bursch added. “The Space Systems Academic Group remains committed to educating future leaders in space, whether they be future astronauts, or program managers, in National Security Space Strategy.”

In addition to his travels in outer space, which President John F. Kennedy coined “The Other Ocean,” Carpenter was the first NASA astronaut to explore the depths of the ocean as an aquanaut for the Navy. On leave from NASA, Carpenter spent a month living and working on the deep sea floor with the Navy’s SEALAB II program in 1965, for which he received the Legion of Merit Award.

“SEALAB work was mule-hard – bitter cold and dark, long and arduous – not brief and glorious like space flight. And the divers put their lives on the line just like astronauts,” Carpenter said during his 2009 discussion with students. “But it was an extremely rewarding experience and I was proud and happy to be part of that group because they were so unheralded.”

Carpenter received his U.S. Navy commission in 1949, and attended the Naval General Line School at NPS from 1957-1959. In operation from 1927 through 1962, the General Line School was one of the first components of NPS to move to the current Monterey campus, establishing its presence on the grounds of the former Hotel Del Monte in 1948. The General Line School provided junior Navy officers with a practical and applied course of instruction in modern naval operations and science at the baccalaureate level.