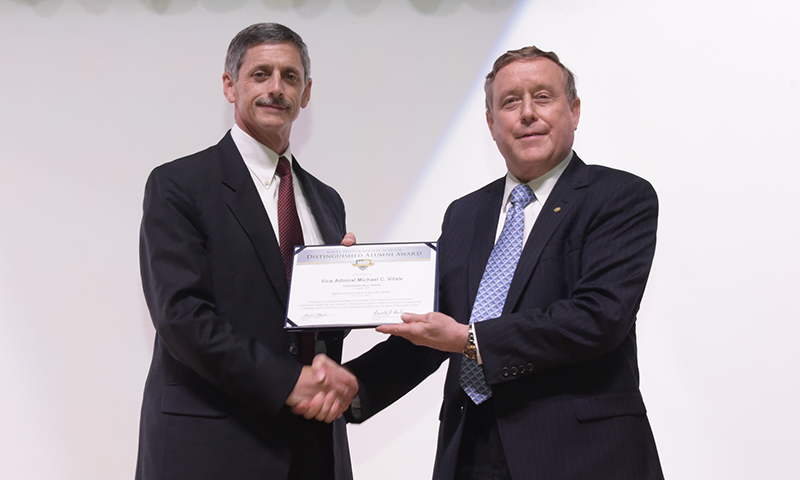 “It’s been 26 years since I’ve been here. I see a lot of things have stayed the same and a lot have also changed. We used to have seven or eight peacocks; we now have Canadian geese, very innovative,” said Vitale with a smile.

Vitale became interested innovation while serving as the commander of Navy Installations Command.

Advocating a particular brand of innovation that recognizes the need for hard work and testing, Vitale calls it, “Innovating with intent.” Innovating with intent requires innovators to focus on five distinct steps: visualize/imagine, ideate, test/experiment, lead the change, and educate.

“First you have to visualize. Once you have an idea, you have to test it, collect data, and analyze it. That’s hard,” said Vitale. “Your idea has to be tethered to a problem. That’s why I say innovation with intent.”

But according to Vitale, no matter how innovative you may be, your ideas will not gain traction unless you are able to sell them to the people that matter.

“If you have a great idea but you can’t sell it, it’s not worth anything. How do you get your boss, peers or subordinates on board to follow the idea that you have shown will probably work,” asked Vitale.

Vitale shared several possible answers to the above question and recommended that potential innovators read Chip and Dan Heath’s, “Switch,” which promises to help readers to change behavior.

Finally, Vitale challenged the assembled students, faculty and staff to educate themselves, and to become innovation subject matter experts.

“At your current level, you are not going to command the culture in your organization. The commanding officer or executive officer may not be into innovation, your challenge is to change that mindset,” said Vitale.

“SGLs can broaden horizons by presenting ideas not typically covered by NPS coursework or other military requirements,” said Chair of the NPS President’s Student Council, Lt. Colleen McDonald. “The goal is to have students get involved, nominate future speakers of their choosing, and become an active part of the SGL program.”