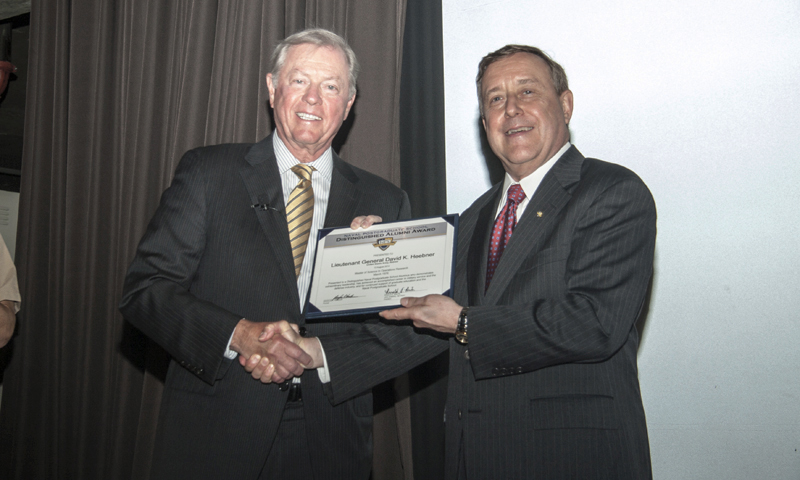 He explained that regardless of how large or small each contribution is, all have the opportunity to share in the happiness derived from success. To illustrate his point, he described the career of professional basketball player Stacey King, an all-American from Oklahoma who was drafted to play for the Chicago Bulls. King played alongside basketball great Michael Jordan who scored 69 points during a legendary playoff game against the Cleveland Cavaliers. King himself scored a single point. Later that evening, when asked about the game by a local news reporter, King replied, "I'll always remember this as the night that Michael Jordan and I combined to score 70 points."

Heebner is a highly-regarded strategist in air missile defense, commanding Air Defense Artillery batteries in Korea and Fort Bliss, Texas, during his active duty career. He also commanded Task Force Patriot Defender in the early 1990s, where he earned the nickname “The Hero of Haifa,” referring to the role he and his Patriot Missile unit played defending Israel from scud missile attacks during the Gulf War. Some of his Patriot batteries were sited near Haifa.

While recalling those trying moments during his presentation to the campus, Heebner described a concert in Haifa that was held in his Soldiers’ honor – a concert that he called a defining moment of his career.

“It was a magnificent classical concert, but the Soldiers in attendance were squirming in their seats. The concert ended, the maestro took a bow and the audience applauded until the maestro came back for the inevitable encore,” recalled Heebner. “[The orchestra then] played Stars and Stripes Forever, and the audience responded. They started to clap, then they turned to where those Soldiers were and started cheering. They were speaking to those Soldiers, but also to the people of the United States and what we stand for. We should never forget that.”

“I believe that life is lived forward and understood backward,” Heebner said. “And I have assumed that is the reason that Admiral Route called me, because with time, we get some perspective. It’s been 40 years since we attended school here together, and I have had an interesting ride between the control room and the boardroom.”

Heebner began his presentation to the NPS community with a cryptic introduction to his theme.

“Shortly after I was invited by President Route [to speak at NPS], the staff called me and asked what I would speak about. I thought about it for a while and I finally got around to an idea for a title, ‘Make the Dash All That It Can Be,’” Heebner noted.

“All of us have probably spent some time in a cemetery,” he continued. “The gravestones always have the same things on them … They all have a birthdate, a passing date, and a dash between them … Everyone gets the same dash, but we are all so different.

“There is so much in our lives that is summed up in that one dash. I would like to give you all a little perspective on how you can make that dash all that it can be,” Heebner added.

The 31-year Army veteran then took the opportunity to share six life lessons that he wished he had practiced earlier. He encouraged the NPS students, faculty and staff in attendance to manage their time, be good to each other, be humble, positive, capable of embracing change and to live a balanced life (professional, family, personal).

A native of Worcester, Massachusetts, Heebner’s distinguished military career culminated with his selection as the Army’s Assistant Vice Chief of Staff from 1997 to 1999. Following retirement, he has risen quickly through the ranks of defense giant, General Dynamics, where he currently serves as Senior Executive Vice President, Information Systems and Technology.

In spite of his many accomplishments, however, Heebner sought to draw attention away from himself and to focus on the contributions that his Soldiers made throughout his career. He contends that it is through our contributions, and the contributions of those around us, no matter how significant, that true happiness is found.