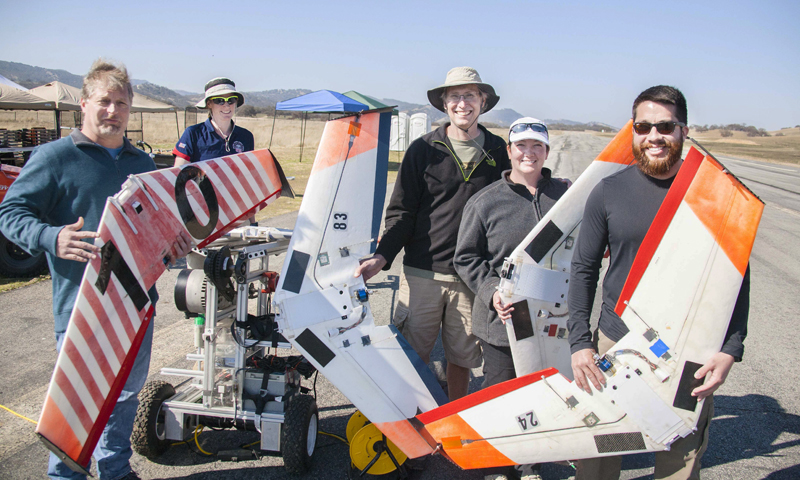 A team of faculty and researchers from NPS’ Advanced Robotic Systems Engineering Laboratory (ARSENL), along with various other educational and DOD institutions, successfully tested a 10 versus 10 drone swarm during a Joint Interagency Field Experimentation (JIFX) event at Camp Roberts, Calif., Nov. 3. In 2017, ARSENL plans to test swarm capabilities with a larger swarm.

“The big picture idea of what we are trying to do is foster the development of behaviors and capabilities for large-scale aerial swarms, specifically fixed wing,” said NPS Research Assistant Professor Duane Davis. “Before we started working this, there really wasn’t anybody doing things with distributed control of large aerial swarms.”

ARSENL has had big plans from the very beginning. The unmanned aerial vehicles (UAVs) that are used are basic, off the shelf, fixed-wing models that have been augmented with 3D printed items, hobby shop modifications, and HD cameras. The team wasn’t concerned as much with developing the platform, rather, with developing the behaviors and intelligence that controls them.

Their first order of business was to simultaneously fly a record 50 UAVs all at once, with limited human interaction.

“Our goal from the start was big, which is why we came up with the number 50. For aerial standards, that is a very large swarm,” said Davis. “That was our primary focus up until August of 2015, which is when we accomplished our 50-plane swarm mission.”

After completing the goal of flying 50 autonomous UAV’s, the team decided to increase the capability of the UAV’s and test the team in a different way.

“What we wanted to do was find a way to foster the development of these behaviors, and we found that we would have to do it as a form of competition. Each team would swarm against another and play a form of capture the flag,” said Davis.

“ARSENL is working on two parallel efforts, one with the Georgia Tech Research Institute, and we will be holding a GTRI vs. NPS swarm event in February,” said Davis. “There is also a DARPA-funded effort that we are supporting called the Service Academy Swarm Challenge, and each service academy will have a team competing in April.”