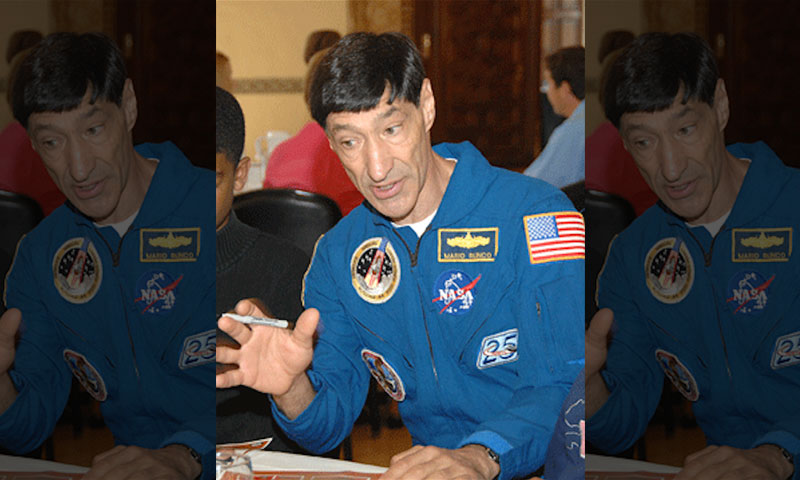 One-third of U.S. astronauts are graduates of the Naval Postgraduate School, more than any other graduate university in the world, and a large number returned to their alma mater in August for a Centennial Salute to Aeronautics and Astronautics.

One-third of U.S. astronauts are graduates of the Naval Postgraduate School, more than any other graduate university in the world, and a large number returned to their alma mater in August for a Centennial Salute to Aeronautics and Astronautics. Astronaut Week, part of the university’s continuing yearlong 100th anniversary celebration, honored the history and heritage of NPS contributions to aviation and space exploration.

Frick and Poindexter are active astronauts, with the latter slated to command STS-131 next March; and both Runco and his wife Susan, who accompanied him and is the NPS alumnus of the dual-meteorologist team, work at NASA Headquarters in Houston.

“Director of the Space Systems Academic Group Professor] Rudy Panholzer has been trying to do this for ten years, and it’s fantastic he’s finally been able to fulfill his dream of inviting all of us Astronaut grads back to NPS,” said Poindexter.

“This is a wonderful opportunity to come back,” agreed Frick, who was Poindexter’s commander on STS-122. “This is a great school that really allows you to expand your horizons, and that means a lot coming from an astronaut.”

The historic and information-packed week kicked off with a “Wear Your Flight Suit to Work” Day, Aug. 4; a special guest lecture by former Lockheed “Skunkworks” Chief Engineer Alan Brown on the history of the company’s Stealth aircraft design program, and an Astronaut reception on the Quarterdeck, Aug. 5; an NPS Astronaut Symposium where Schweickart and guest former astronaut Tom Jones detailed their decade-long effort to protect the Earth from devastating impacts of extinctor-scale asteroids like the one that wiped out the dinosaurs 65 million years ago, and a spacecraft survivability panel featuring the pioneering research of retired NPS Prof. Emeritus Robert Ball; a candid and lively exchange by astronaut spouses on the common challenges of astronaut and military families; a fun-filled “Breakfast with the Astronauts” on the theme “Reach for the Stars!” where the astronauts shared their experiences living and working in space and projected photos taken from the Space Shuttle and International Space Station onto the walls of the Barbara McNitt Ballroom, Aug. 7; a gala California International Air Show dinner that evening, also in the ballroom, where the Astronauts joined 14 members of the Navy’s Blue Angels flight demonstration team; and the participation of a number of the astronaut alums at the Air Show, Aug. 9.

Until recently, Bursch held the record for the longest continuous duration in space by an American astronaut, of over 226 days. Other U.S. Space Program alumni include the second American to orbit the Earth, Mercury 7 astronaut retired Navy Cmdr. M. Scott Carpenter and retired Navy Capt. Eugene Cernan, commander of Apollo 17 and the last man to walk on the Moon.

As Carpenter said during a recent teleconference with NPS leadership and Space Systems Academic Group faculty and students, “It’s wonderful that the Naval Postgraduate School has such a strong space program, for both engineers and operational students, and that the magic of space flight has caught on here.”

“NPS continues to be on the forefront of educating America’s astronauts,” said Alumni Relations Office and Centennial Planning Headquarters Director Kari Miglaw. “As a leader in space education and research, NPS paves the way for future astronauts to pursue their dreams.”