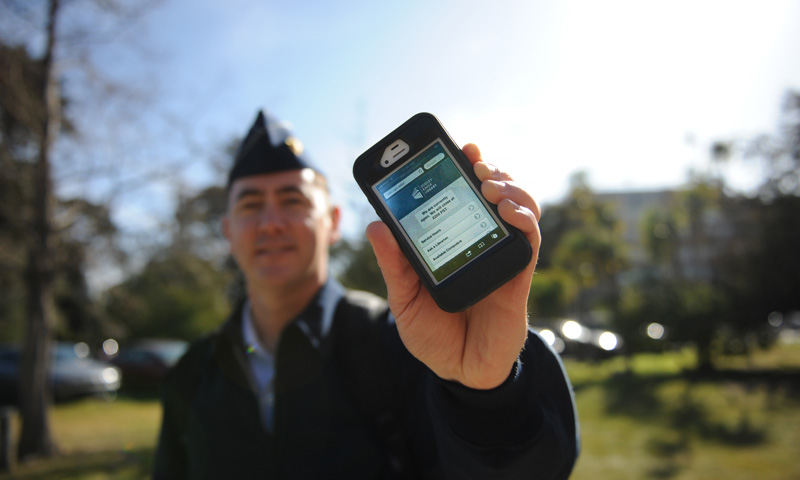 The site provides users the same features as the regular site in a concise, easily accessible and easy-to-read version for mobile devices. Users can access features such as operating hours, computer accessibility, availability of a book or document, or even ask a question with the “Ask a Librarian” Feature.

“I think it’s a great idea,” said National Security Affairs student Air Force Maj. Steven Peña. “You have all the information about the library in a convenient hand-held device that you can take with you everywhere you go.”

Peña was impressed with the idea of being able to ask a question directly to a librarian and getting a quick response back without having to find a computer, log on and search for the site.

Also, as an added feature, the site has its very own Quick Response (QR) Code that when scanned with a QR reader on a mobile device, the user is instantly directed to the mobile site on the device’s web browser.

And with this goal in mind, DKL has been increasing its efforts to better serve its users on and off campus. The library has constantly been looking for ways to improve services to its patrons, and the mobile site project is one example of those efforts. The project took months of preparation and planning by DKL staff to develop, design, troubleshoot and finally launch the site.

“I’m very excited,” said Reference & Instruction Librarian, and project lead, Andrea Davis. “This has been a project that I’ve been involved with for about a year, and there have been many starting and stopping points as technology has come together and as availability has been possible so it’s really nice to be able to launch it.”

Davis said that she was very satisfied with the response she has seen so far; just within the first week she received positive feedback from users around campus.

And even as the site receives its first customers, site developers begin the process of adjusting the site to arising demands from new users.

“It’s a constantly evolving process,” said site developer Russ Bernhardt. “We’ve been chipping away at this long list of requests that will just continue to grow with the launch of the site.”

The feedback is something Bernhardt says he has been looking forward to since the beginning of the project because it offers the opportunity to address unforeseen issues and receive feedback from real users.

“We want to provide what people want,” said Bernhardt, “But we won’t know until we ask them … I like getting direct feedback.”

Part of getting this feedback is to get students and faculty to know about it and use it. For this mission the library started a rigorous marketing campaign led by Library tech Mike Ruff. Posters, flyers, bookmarks and even candy and coffee holders were emblazoned with the QR code and information on the site and were distributed all over campus.