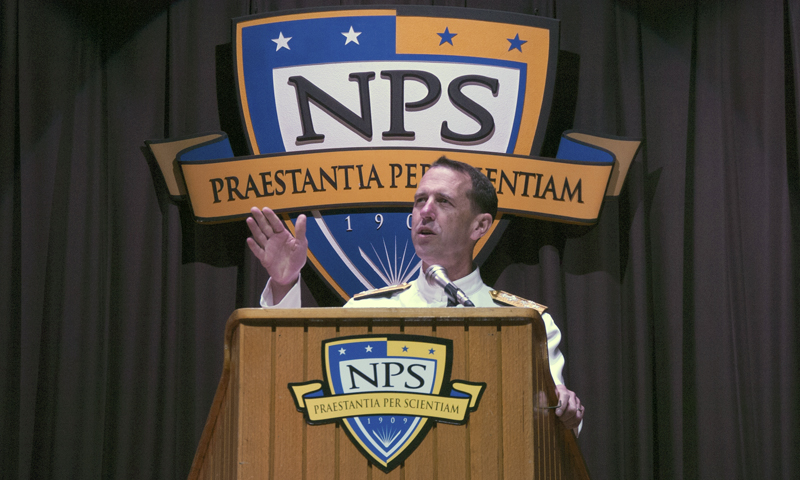 “Your NPS education will provide you with the foundation upon which the rest of your careers and lifelong learning are built,” said Route. “Our nation will count on you graduates as strategic ‘influencers,’ problem solvers, and leaders wherever your careers take you.”

On hand to congratulate the graduating class was Chief of Naval Operations (CNO) Adm. John M. Richardson who served as guest speaker.

“My preparations for this speech began last weekend … I started by sitting down and reading through your theses,” said Richardson. “The sense that comes through them is loud and clear … This class represents a tremendous addition to the strategic arsenal of our nation.

“The other thing that became very clear from your theses, is that the world is getting far more complex and that its pace is picking up,” continued Richardson. “Pace is the one word that I use to describe our strategic environment.”

Richardson went on to offer several examples of areas experiencing rapid change with important naval implications. He noted tremendous rates of change in the maritime environment, the digital world and in the development of new technologies.

“The amount of ships that travel though the Indian Ocean has increased by 300 percent since 1992. If you think of the thousands of years that ships have been traveling across the Indian Ocean, to have a tripling of maritime traffic in the last 25 years is truly stunning,” he said.

He also described the doubling of data stored in the digital world every two years, and discussed the pace of technological development that has paralleled accomplishments in the realm of data storage.

“It was only in 2011 that IBM’s Watson Super Computer beat the Jeopardy champions. That Watson was the size of ten refrigerators … fast forward just four years and that same Watson is the size of three pizza boxes … And not only is it 90 percent smaller, it is about 27 times more powerful,” said Richardson.

But despite the rapidly changing world in which the Navy operates, Richardson expressed confidence in the graduating class’s ability to meet its challenges.

“This school has prepared you. NPS is ideally situated to make the most of this pace, and to make you individual experts in your fields. By virtue of your contributions, the Navy’s performance curve will bend upwards,” said Richardson.

Richardson also noted the value that NPS brings to the Navy.

“This school is focused on our issues, it provides detailed solutions to hard problems, tactical and operational, and it will have a big impact on how our Navy moves forward. It educates to our standards, in our areas of interest. It embraces the sincere self-assessment that is the very first step toward high velocity learning and continuous improvement. And indeed, in every aspect, it operates to our standards of excellence in every way,” said Richardson.

“This faculty has invested deeply in you. When you travel throughout the world, you will carry a piece of them with you,” Richardson said. “Today you are all leaving as weapons in our strategic arsenal. You are all strategic assets. You will go off and strengthen our Navy and preserve our maritime superiority.”

Richardson assumed the role of Chief of Naval Operations, Sept. 18, 2015. His distinguished career includes, among other assignments, commanding the nuclear attack submarine USS Honolulu (SSN 718). He has also served as Director, Naval Nuclear Propulsion Program, and received the prestigious Vice Adm. James B. Stockdale Inspirational Leadership Award in 2001, among a long list of personal and unit awards.

NPS is the nation's premier national-security focused university. It has been offering defense-relevant graduate degrees since 1909, and has been operating continuously in Monterey, Calif., since 1942.