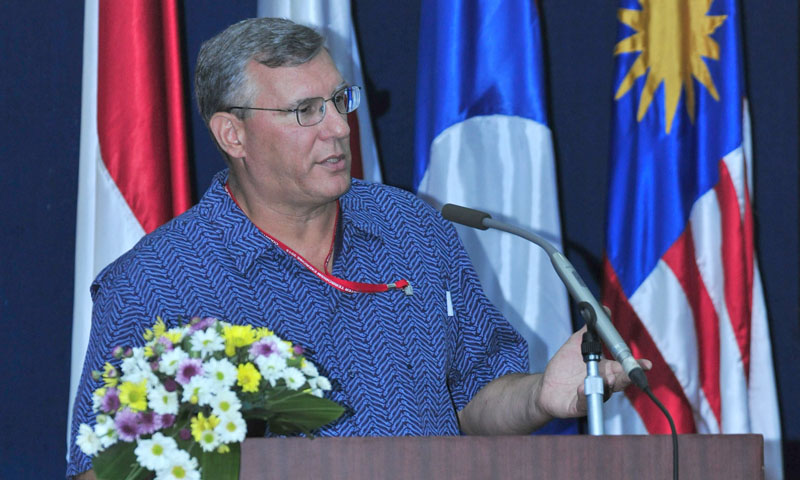 NPS Center for Civil-Military Relations Lecturer, retired Navy Capt. Tim Doorey, speaks during a multinational counterterrorism exercise in Indonesia in 2013. Through years of dedicated research and relationship building, Doorey’s efforts have begun casting a bright light on the advancement of counter extremist strategies focused on soft power and de-radicalization.

As the world struggles to respond to the recent wave of attacks by radicals in Paris, Africa and the Middle East, the Naval Postgraduate School’s (NPS) Center for Civil-Military Relations (CCMR) has waded into the fray with its most explosive weapon – education.

The CCMR welcomed a diverse group of U.S. and foreign academics, military operators and communications experts to the NPS campus to attend its Cyber-Terrorism Workshop, Dec. 15-16. In addition to discussing cyber-terrorism and radicalization, workshop attendees discussed appropriate responses to extremist activity and drew from the collective experience of professionals who have been fighting terrorism for decades.

“We have had a counterterrorism program at CCMR since 2002 … but with the advent of ISIS and its ability to bring in radicals from all over the world, we decided it was time to take a second look at the curriculum, to see what we could do to improve it, and to tailor it to the events that we see today in the Middle East and Africa,” said CCMR lecturer and retired Navy Capt. Tim Doorey.

The workshop was built upon previous CCMR work with allied and partner nations to respond to terrorism, online radicalization, recruitment, training and fundraising.

“For a few years now, we have gone out to various countries and offered a one-week ‘cyber terrorism program.’ Unfortunately, many of the countries requesting the program were more focused on state and organized criminal threats, and were less interested in terrorists’ use of the Internet,” explained Doorey.

“We have learned that the security services in many countries, even in the Middle East and Africa, don’t fully understand or appreciate the important role the Internet plays as a virtual sanctuary for many terrorist groups,” he added.

Some of Doorey’s perspectives, as well as those of his fellow workshop participants, may come to a surprise to those unfamiliar with CCMR’s work. The group’s recommendations tend to focus on soft power, and what military practitioners refer to as ‘non-kinetic’ operations.

“Currently, our counterterrorism operations are 80 percent kicking down doors, 10 percent prevention, and 10 percent education. We need to turn that around,” said Doorey. “You are not going to shoot your way out of this problem.”

Many of these insights stem from the CCMR’s work with nations, like Indonesia, that have been fighting terrorism for decades. A 2013 CCMR-supported, Association of Southeast Asian Nations (ASEAN) Plus counterterrorism exercise in Sentul, Indonesia was formative. It welcomed Indonesian Counter Terrorism Agency Director retired Inspector Gen. Anysaad Mbai, along with hundreds of participants from 18 other ASEAN nations. During the exercise, Mbai shared lessons learned from his nation’s decades-long fight against extremism.

For much of its history, the Indonesian government had used extensive military force and implemented draconian laws, such as the Anti-Subversion Law, to kill, capture and interrogate scores of suspected terrorists. Yet, according to Mbai, these efforts proved to be counterproductive.

“The results were at best short-lived … the most important lesson learned from that multi-decade experience was that the more physical pressure brought to bear upon [the terrorists], the more militant and radical they became,” said Mbai.

“There are two approaches to countering terrorism. The first is law enforcement, the second is military, but in my opinion, a war on terrorism is a war on an idea and you can’t shoot an idea. That's why we use a soft approach to engage extremists,” explained Mulya.

After the Bali bombing in 2002, the Indonesian government flew Mulya home from a posting in Tunisia to help counter extremists’ efforts in the region.

“We started mapping terrorist networks in an attempt to understand their goals,” said Mulya.

Mulya also reached out to fellow ASEAN members to synchronize counterterrorism efforts. Important to his work are efforts to provide moderates with a platform from where they can counter extremist rhetoric.

“We are working to empower the moderates to challenge radicalism,” said Mulya.

Nanyang Technological University Professor of Security Studies Dr. Rohan Gunaratna is the head of the International Centre for Political Violence and Terrorism Research. He traveled to NPS from his office in Singapore to attend Doorey’s workshop. Gunaratna is one of the foremost experts on Islamic extremism and is the author of "Inside Al Qaeda: Global Network of Terror.” He discussed his participation in the workshop and what he believes will be necessary to defeat terrorism and the radicalization of marginalized communities.

“The workshop that we just concluded at the Naval Postgraduate School at Monterey focused on the use of soft power, because without building the capability and capacity to counter the terrorist narrative on land, it is impossible to win the fight,” noted Gunaratna.

“Soft power is absolutely necessary to ... build a movement against the wave of extremism,” he continued. “Most governments are masters in the use of hard power, but the best power in the fight against terrorism is a mixture of soft power and hard power that we call ‘smart power.’”

Gunaratna also described the battle for the hearts and minds of marginalized communities, and the need for governments to reach out to them.

“Terrorist organizations have their own media outlets and they are influencing the human terrain to gain support and recruits. They want to win, not only in their own communities but in the migrant and diaspora networks as well,” added Gunaratna. “It is paramount for all governments that are engaged in fighting extremism and terrorism to be able to reach out to those vulnerable segments of our population and to try to counter the terrorist narrative and promote moderation.”

Still, Gunaratna acknowledges that there are instances where soft power is not enough. While at NPS, the infamous Tehrik-i-Taliban Pakistan (TTP) stormed a school in Northern Pakistan killing 112, the majority of which were the children of Pakistani military officers.

“In the case of the Tehrik-i-Taliban … its ideology is identical to that of Al Qaeda. It is a deadly group and it must be militarily dismantled. But parallel to that, there must be a community engagement strategy to educate Pakistanis … that it is not in keeping with the tradition of their religion to support groups like the TTP,” said Gunaratna.

Gunaratna also offered chilling advice about the need to understand the terrorist mindset in order to combat it.

“When you fight terrorism, the terrorist group must be your mentor. You must understand the terrorist network. You must have an insider’s perspective. If you don’t understand the group you cannot dismantle it,” explained Gunaratna. “I personally believe that the biggest weakness our governments have is that they have not studied these groups in depth. We must know everything about them … intimate knowledge of your enemy will better help you to defeat them.”

“I was able to study Al Qaeda because I interviewed many members of Al Qaeda in Iraq and Afghanistan. I believe that unless you interview a large number of these members, you will not be able to develop a strategy to defeat them,” Gunaratna continued.

Also in attendance at the workshop was Zora Sukabdi. Sukabdi is an Indonesian psychologist and the founder of the Global Center for Well Being. She has been working for the last seven years to re-educate and reintegrate radicals into Indonesia society and beyond.

“One of my more effective interventions followed a 2,000-man declaration of support for ISIS [in Indonesia]. I called the Indonesian National Council of Ulema, and asked them whether or not they were pro-ISIS, they said ‘no.’ I said, ‘then do something.’ The next day they declared publically against ISIS.”

In addition to her formal secular education, Sukabdi is a graduate of the Al Azhar Islamic School of Indonesia where she focused on Islamic studies for 13 years. She uses a mixture of religious and academic tools to reach out to extremists.

“Because I am a psychologist … I focus on their well-being. I do not want to harm them, I want to help them to integrate back into society,” explained Sukabdi. “I also work on their families and help them to improve their relationships with them.”

Key to Sukabdi’s work are her efforts to help her clients to see how their actions affect themselves and others. She also works to help them to see the clear fallacies behind extremist logic.

“We help them to think critically and to look critically at their leaders,” said Sukabdi. “We ask questions like, ‘Is so-and-so truly a good role model?’ or ‘Is it appropriate to do taqleed [religious imitation] to this person?’”

Sukabdi’s interactions with an incarcerated, would-be bomber that learned bomb making online is illustrative of her approach. The would-be bomber attempted to blow himself up at a traditional ceremony with both Hindu and Muslim origins.

Sukabdi uses questions like these to help her clients examine their actions.

“I help them to differentiate between dar al Islam [the abode of peace] and dar al harb [the abode of war], they counter my arguments with hadith [sayings of Muhammad] about the believers being one body,” explained Sukabdi. “[I counter by] demonstrating that there are different treatments for different ailments.”

Sukabdi also offered interesting insights into the process by which many young men become radicalized.

“They join a halaqa [a study circle] and become attached to a teacher who in turn teaches blind obedience. Over time the recruit is slowly radicalized, convinced that the government is taghut [corrupted by having crossed divinely imposed limits],” she explained.

According to Gunaratna, extremist ideology is appealing to youth marginalized by societal oppression, corruption in the government, or even grievances grounded in how they or their religious group is treated. This potential audience for extremism only desires a means to stand up to oppression … “And in today’s instant gratification society, you must compete with organizations like ISIS that offer immediate gratification in their eyes,” stressed Gunaratna.

Civilian, military and even religious leaders struggle to respond effectively to the numerous threats posed by extremist organizations. But Gunaratna believes that research and education, like that which is conducted at NPS, is a step in the right direction.

“NPS and its specialized centers like the CCMR, as well as NPS’ Department of Defense Analysis and NSA [National Security Affairs], are all vanguards in the fight against terrorism. You have produced the resources and the capabilities that we need to fight these organizations.”

“The work that you are doing is very beneficial because it is practical and you can share it with the front line operators. Your work on dark networks is amazing … it gives the critical knowledge necessary to launch influence operations,” said Gunaratna. “I commend NPS and NPS’ research staff who are at the forefront of fighting terrorism.”