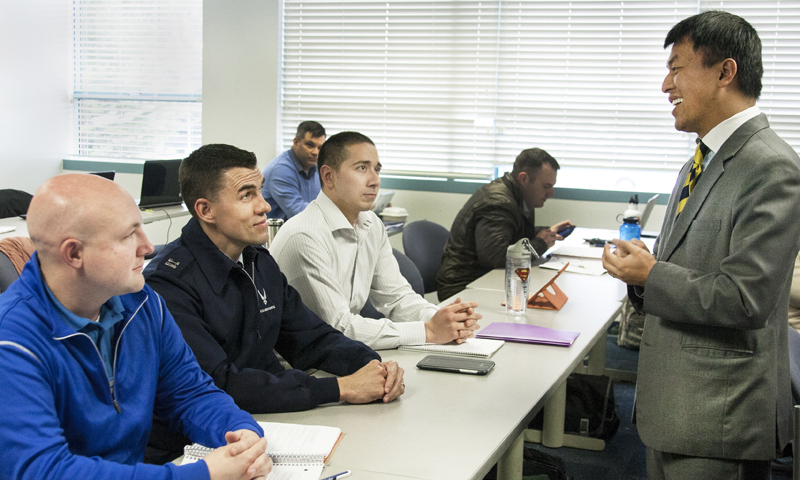 Naval Postgraduate School Assistant Professor Sophal Ear discusses the political economy of Asia with, from left to right, Navy Lt. Joe Lemanek, and U.S. Air Force Capts. Erich Clayson and Michael Nishimura all of which are earning graduate certificates in Asia-focused studies in preparation for future deployments to the region.

In response to a call to action from the Navy’s Office of Foreign Language, Regional Expertise and Culture, the Naval Postgraduate School (NPS) is currently funneling a select group of officers through a rigorous graduate certificate program in Asia-focused studies.

One of the leading forces behind the effort is Asia-Pacific Hands Program Director retired Navy Capt. Lee Johnson, who was instrumental in bringing the effort to NPS.

“NPS is one of the Navy’s flagship schools, they have really taken an interest in our officers,” said Johnson. “Our shared interest in Asia regional studies is being brought about due to the Navy’s rebalance toward the Pacific. We are going to need regional expertise and education to make that adjustment successful.”

“There are tremendous educational resources available here at NPS that can meet the Navy’s ‘just-in-time’ education needs, for both officers and enlisted personnel, at a very minimal cost,” said Wirtz. “We can make a difference in the ability of our service members to hit the ground running in positions that require regional expertise.”

The certificate program is also being leveraged by organizations outside of the Asia-Pacific Hands program to meet needs unique to their respective mission-sets. In some instances, the certificate is helping officers with regional expertise outside of Asia to change gears and to focus upon a new part of the world.

“There has been a lot of time and attention put into preparing officers to serve in Afghanistan. We cannot afford to completely retrain them, but we can take advantage of the skills and expertise that they gained conducting previous regional studies and help them to build upon those skills,” said Wirtz.

The program was designed to be challenging, minimally disruptive, and fiscally feasible within the Department of Defense’s current budgetary restraints.

“Our service members earn graduate education certificates in a 3-month period that is not too disruptive to their careers,” said Johnson. “Officers that attend NPS are going to areas in the Pacific, and we send them to NPS in route to their assignments.

“We have chosen a set of courses that will make them knowledgeable of the region, the certificate program is not a ‘gentlemen’s course,’ we want our students to be challenged,” continued Johnson.

Still, in and of itself, the program is not meant to take the place of the in-depth graduate-area studies necessary to train Foreign Area Officers (FAO) and other regional experts.

“We are not looking to turn these service members into FAOs, we are trying to make them more capable staff officers – officers who are better equipped and more informed as they are put into billets that require regional expertise,” said Johnson.

Air Force Capt. Mike Nishimura of Munster, Ind., is a Regional Affairs Strategist (RAS). He recently came to NPS via Thailand where he completed a three-year foreign officer exchange tour with the Thai Air Force.

“I hope to get a better understanding of the region as a whole,” said Nishimura. “After leaving NPS I will serve as a desk officer responsible for coordinating key leader engagements with leaders from our partnered nations’ militaries.

“I will also serve as training facilitator and bring together subject matter experts that will help our leadership to formulate military policy toward those nations,” continued Nishimura.

Nishimura feels that his NPS studies have helped him to see the big picture in South East Asia.

“I have garnered a deeper understanding of why things are the way they are. We are studying the historical background of the region with a focus on U.S. foreign policy in Asia, political economy and current affairs,” said Nishimura.

Air Force Capt. Erick Clayson of San Angelo, Texas is also studying the political economy and culture of South East Asia. The Air Force is leveraging his previous international relations graduate studies and advanced language training to help him achieve a greater understanding of the region and to prepare him to work as a South East Asia Regional Affairs Strategist.

“I am glad that I am in this program, it has really opened my eyes and helped me to look at things in a different light,” said Clayson. “Though not an economist, my studies at NPS have led me to see the convergence of economics and politics and how they affect what is going on in the region.”

“Studying at NPS helps to keep us from getting stuck in the military mindset … The military needs leaders who are able to operate within the global landscape,” said Clayson. “Working in NPS’ joint and international environment is a golden opportunity to understand important global and regional issues.”

Clayson, Nishimura and fellow program attendee Lt. Joe Lemanek are studying Asia’s political economy under NPS Assistant Professor Sophal Ear. Ear is helping them to understand the inter-related economies of Asia and how those economies affect U.S. policy and the policy positions of U.S. allies and other regional powers.

“China’s return, as opposed to rise, to its proportional place in the global economy has undeniably caused our ‘pivot’ towards Asia. But what this means in Beijing differs markedly from Tokyo, Seoul, Bangkok, and Phnom Penh,” said Ear.

“While America’s hegemonic status in terms of hard power remains undisputed, China’s GDP may surpass our GDP as soon as 2017 and learning about the political economy of Asia, by examining the economic development and trajectory of countries such as China, Japan, South Korea, Thailand, and Cambodia, is especially important for Asia-Pacific Hands students to prepare them for what is arguably the defining question of this new century,” continued Ear.

Clayson sees the investment in regional studies as a step toward the prevention of conflict – particularly conflicts born of misunderstood intentions.

“Future threats can emerge if we do not have people in these areas that understand the regions in which we are operating,” said Clayson.

Asia-Pacific Hands Action Officer Lt. Chelsey Zwicker agrees.  She believes that regional studies at NPS will help naval officers to give their respective commanders the advice necessary to make good decisions while operating throughout Asia.

“Our aim is to support the decision makers by giving them staff members who have the regional knowledge necessary to help them make informed plans and decisions,” said Zwicker. “We are working to give them an extra edge and to build regional proficiency.”