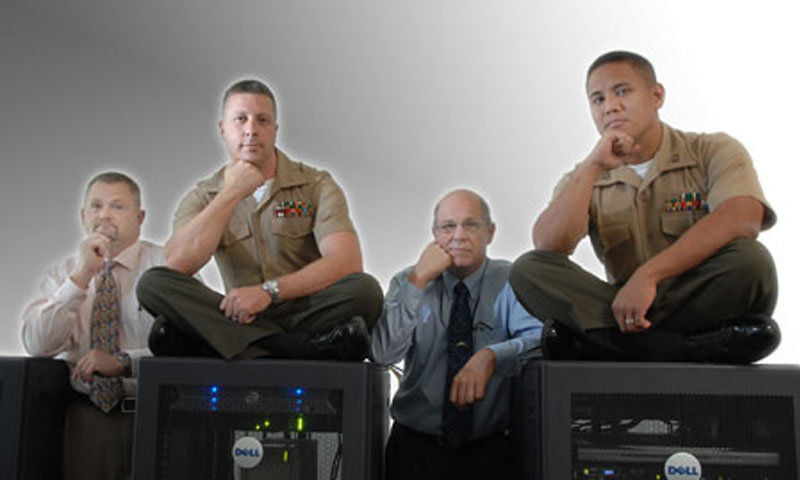 Information Sciences Senior Lecturer Albert “Buddy” Barreto, second from right, has officially opened the Virtualization and Cloud Computing Lab for business in Root Hall. The facility is already supporting student research, Marine Corps Captain Miles Tiglao, far right, was one of the first to make use of the facility. Assisting Barreto in getting the lab operational were Glenn Cook, Academic Associate for Information Science, and Marine Capt. Ryan Geer.

When you think about clouds, you normally think of billowy white formations in the atmosphere, but the Naval Postgraduate School has opened a new “Cloud” center that’s all about computing, not meteorology.

“Cloud is a metaphor for the Internet,” Barreto explained, “so a good way to think about cloud computing is delivering software and data over the Internet as a service, rather than programs and information ‘residing’ on your computer. The ‘cloud’ removes applications, data and in many cases [virtualized] hardware from the user, stores them on servers and makes them accessible online via a Web browser. There are internal ‘clouds,’ like the NPS Intranet, and external ‘clouds,’ like ones offered by Google and Amazon.

“Cloud computing is also seen as the next version of utility computing, where applications, storage, CPU and memory are delivered as for-fee metered services,” he added.

Though cloud computing is often talked about as a paradigm shift, “It’s actually a ‘retreat to the future,’” Barreto noted, “as we’re revisiting a 1970s computer model using the advanced technologies of the 21st century, with very promising results.

“We’ve leveraged relationships with the Marine Corps Systems Command for subject matter expertise and technical resources as well as PEO-IWS for hardware and software in support of specific thesis work in Information Assurance,” Barreto added. “And we’ve recycled hardware systems in support of basic research needs and the IS3502 Networking Labs where we’ll teach virtualization concepts.”

Barreto received both a Master of Science in Computer Information Systems and a Bachelor’s degree in Business Administration from the University of Phoenix before coming to NPS.