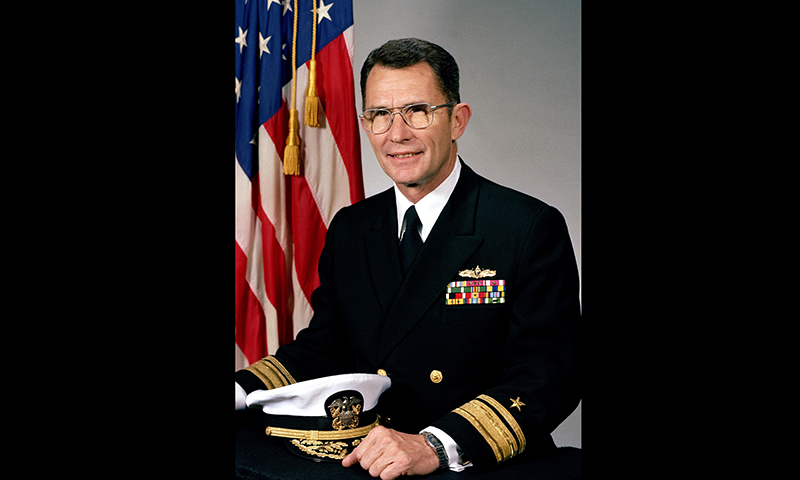 Retired Rear Adm. Peter Conrad died in Leonardtown, Maryland Dec. 10, 2017 at the age of 88 years old. He was predeceased by his wife Judith Coville Conrad and by his younger twin siblings Julia Conrad Byrne and John Conrad. He was survived by his brother Charles Conrad and three children, their spouses, and eight grandchildren.

Conrad’s at sea career culminated with command of Cruiser Destroyer Group TWELVE. Ashore, he held several billets involving financial management with his final position before retiring being Deputy Comptroller of the Navy. He graduated from the United States Naval Academy in 1953, and went on to hold sea duty assignments on both diesel submarines and surface combatants.

Conrad is the namesake of the NPS Conrad Scholar Program, which seeks to enhance professional development opportunities for students and faculty, and conduct and direct research supportive of the Office of the Assistant Secretary of the Navy (Financial Management and Comptroller) in areas of resource management. Up to four top Financial Management M.B.A. students per graduating class are identified as potential Conrad Scholars and cleared to complete their theses.

“There is both an immediate impact and a longer-term impact for the Conrad Scholar alumnus,” said Dean of the Graduate School of Business and Public Policy Dr. Bill Gates. “The immediate impact is that their thesis work is presented to the Navy’s Financial Management leadership, including the ASN (FM&C), the DASN (FMB)/OPNAV (N82) and their staffs.

“This highlights their qualifications as scholars, and the quality of NPS graduates, to the highest levels of Navy leadership in the Financial Management community,” he continued. “Longer-term, the Conrad Scholar Additional Qualification Designation in their service records indicates outstanding academic performance in the Navy financial management community, which gives them priority in filling positions of increasing responsibility in Financial Management when available.”

Since the program’s inception in 1991, there have been 133 Conrad Scholars, with that number growing each passing academic year. Scholars come from every line and staff community in the Navy and Marine Corps, and can be found in many of the Navy’s key and essential fiscal management billets today. Several of the Scholars have achieved Flag and Senior Executive Service rank within the Department of the Navy and the Federal Government.

“Conrad Scholars address many of the high interest challenges that face our Navy and Marine Corps today,” said NPS Conrad Chair retired Vice Adm. John T. "Terry" Blake. “Topics include personnel issues such as retirement, maintenance, training and readiness issues which are front and center before the Department's leadership today. Conrad Scholars return to Washington D.C. just prior to graduation and brief their topics to the Department of the Navy’s leadership, as a result of their research, they offer work with individuals they will interact with in future assignments following graduation from the Naval Postgraduate School.”

This programs differs from MBA programs at leading civilian institutions in that it’s focus has a particular emphasis on the Planning, Programming, Budgeting and Execution process.

“This is an honors program within the MBA Financial Management concentration,” continued Gates. “It distinguishes graduates on the basis of academic excellence, thesis quality, and leadership while at NPS. Candidates are selected by the Conrad Chair and two GSBPP faculty members. Nominees are approved by the Office of the Assistant Secretary of the Navy, Financial Management and Comptroller. The Conrad Program and Scholars provide an important connection between NPS, GSBPP, and the Navy’s Financial Management Leadership.”