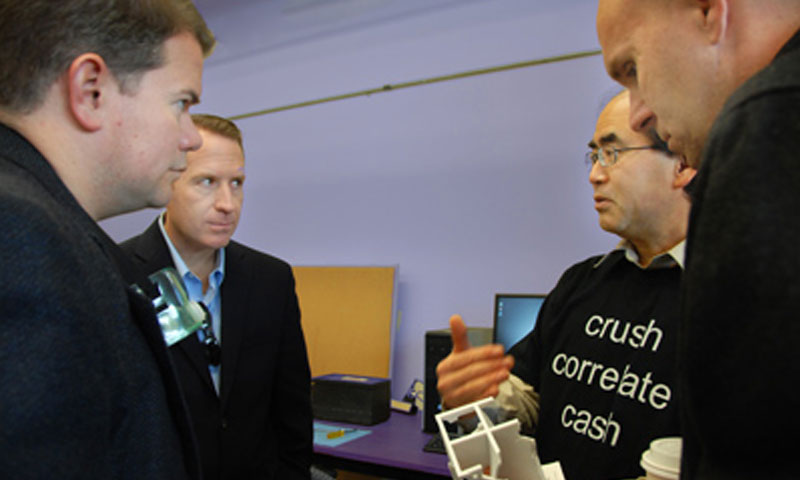 The Space Systems Academic Group at NPS is known for being active in developing CubeSats- small, square satellites used for space research. The satellites have become widely popular in academia as they are relatively cheap to build and give students a chance to see their final product actually launched into space. The trip into space can be hard on the small structure, and the folks at DARPA hoped to determine just how much of a beating the CubeSat can withstand. They recruited NPS’ Professor Rudy Panholzer and Distinguished Professor Young Kwon to develop and destroy a plastic CubeSat structure for the 2010 DARPA Digital Manufacturing Analysis, Correlation and Estimation (DMACE) Challenge. Oak Ridge National Laboratory in Tenn. supported the second half of the Challenge by similarly producing and destroying a titanium sphere.

“NPS was selected to execute the DARPA Challenge based on the combined expertise of Rudy Panholzer and his Space Systems Academic Group, and Young Kwon of the MAE department,” said DARPA Fellow, Tim Sands. “Professor Kwon literally wrote the book on Finite Element Methods. Professor Panholzer’s leadership in CubeSat developments and the ‘Annual Technology Review and Update’ together made the combined NPS team the clear choice to host the Cubesat-Crush portion of the DARPA Challenge.”

The CubeSat structure is fabricated using a ‘3D printer’ of sorts. Digital Manufacturing (DM) uses computers and multi-dimensional ‘printers’ to create physical models of an image using a computer-aided design (CAD) program. The machine lays out the polycarbonate material layer by layer to form the complete structure. Through the competition, DARPA looked at DM as a cost-effective manufacturing method for small quantities of complex objects. Testing the durability of the objects helps determine if the DM process can produce a product that meets the necessary structural properties for the user.

“When digitally manufacturing the CubeSat structure, we found that as you make the structure, how it builds up from bottom to top, those details are very critical to the material properties,” explained Kwon. “So we did a lot of testing for tension and compression, and then we found out the material properties for different objects, depending on how they are fabricated. That is important because if you want to fabricate something, you need to be able to support the load.”

To determine the load that each of the structures can bear, participants were given data sets containing the basic information about the structures, and were tasked with determining how much force would be required to crush the CubeSat and the sphere. Twenty one teams from around the country submitted their predictions.

On December 8, Kwon, Associate Professor Luke Brewer, Research Associate Dan Sakoda, Materials Engineer Chanman Park; and DARPA Fellows Sands and Marine Corp Maj. David Weinstein gathered around the Mechanical Testing Machine to test the strength of the 10cm by 10 cm CubeSat structure. That data, and the data from the Oak Ridge Lab’s tests were then sent to DARPA where the winner was determined.

The team with the closest prediction to the actual figures was then announced on December 10. The University of California, Santa Barbara team, led by Professor Frank Zok, earned the $50,000 prize with their use of finite element models to most closely predict the maximum compression load for the two structures.

“The Challenge was a success based upon the technical merits in addition to validating the scope of utility for crowd-sourcing complex technical problems,” explained Sands. “The result of this development effort generated methods for predicting the ultimate strength of digitally manufactured structures and also establish the first openly available database for the strength of digitally manufactured titanium and polymer structures.”