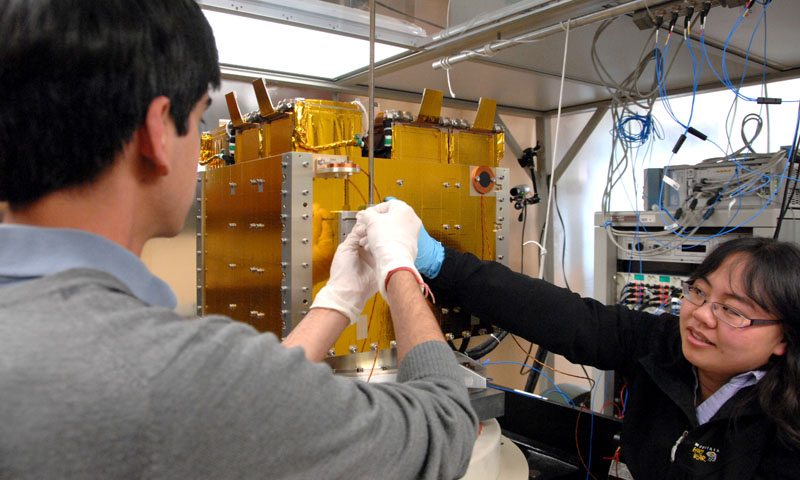 In many ways, it will be a monumental launch for the Space Systems Academic Group (SSAG) at NPS. After a recent successful test run, two exciting NPS projects are scheduled to head to space in August of this year … one is a CubeSat, a small satellite destined for Low Earth Orbit, and the other, the NPS CubeSat Launcher or NPSCuL, is the payload platform that will carry it there.

NPS students and faculty, in a project funded by the National Reconnaissance Office (NRO), have designed and built the NPSCuL, pronounced NPS-cool, axillary payload platform to allow multiple CubeSats to be launched aboard rockets as secondary payload – meaning the rocket would be able to carry satellites in onboard space that would otherwise be unused.

NPS Space Systems Professor Jim Newman noted the value of such an opportunity for NPS and NRO to collaborate on a project that has such potential for the future of CubeSat missions.

“A fair number of the NPS Space Systems Engineering (SSE) students go to work at the NRO, ensuring that the Navy’s interests in space, in particular, and the DOD’s interests, in general, are well represented,” explained Newman. “Giving students the opportunity to work on real-world, hands-on space projects, such as CubeSats, helps keep us relevant and exposes students to learning beyond the classroom.”

The specially-designed NPSCuL is essentially a box into which the small satellites will be stacked until they reach the desired destination. At that point, spring-loaded doors will release the satellites one-by-one into orbit, where they will gather data for the duration of their one- to two-year lifespans.

“The CubeSat platform provides an opportunity to develop technologies that better serve our current military's needs,” explained SSE Ph.D. student Wenschel Lan, one of two civilian graduate students working on the project. “The small size of a CubeSat, compared to a typical large satellite, lends itself to be more responsive and efficient, which are important advantages in the planning and operations of space programs.

“NPSCuL, which can accommodate up to 24 CubeSats in a single ESPA-class [Secondary Payload Adapter] payload volume, enables these technologies to be developed at a much higher rate than any other U.S. launch capability to date,” she continued. “This inaugural flight of NPSCuL will provide more launch opportunities for the continually-growing CubeSat community, which is estimated to include over 120 universities, private companies and government organizations.”

The August 2012 mission carrying 11 CubeSats is known as the Operationally Unique Technologies Satellite (OUTSat) and will enable NPS researchers to get one of their own CubeSats into space for the first time. That CubeSat is part of a collaborative effort between NPS and the Lawrence Livermore National Laboratory (LLNL), and hopes to gather proof-of-concept data that is of significant importance to the space community. Known as STARE, the NPS/LLNL CubeSat will observe other satellites and help determine threats posed by space debris.

Space debris is a costly and dangerous problem for the space community, and one that the Navy and NASA have plenty of reasons to be concerned about. NPS Professor and Chair of the SSAG Rudy Panholzer explained that the Navy relies heavily on satellites for communications at sea. Space debris can be unpredictable and can cause millions of dollars in damage if it collides with operational satellites in orbit. STARE will help researchers look at ways of detecting a potential collision early on so that the satellites operators have time to re-position the satellite out of harm’s way. 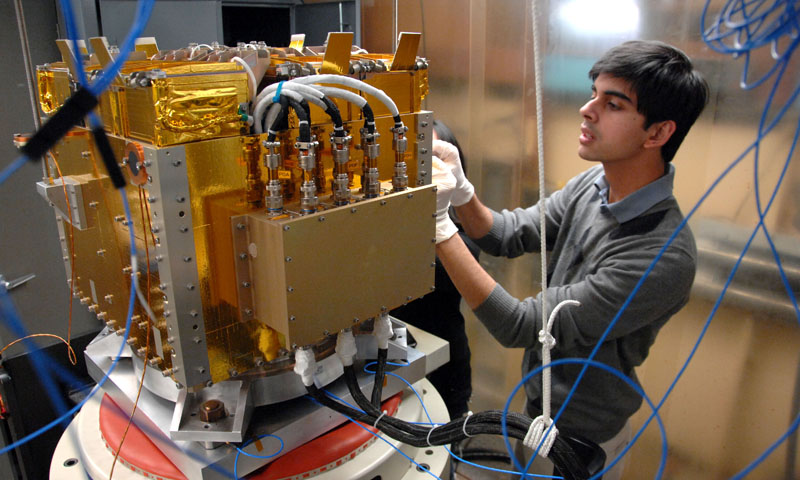 “The Navy is interested because they have a lot of assets in space which they rely on,” explained Panholzer. “And if we find a ways of locating the space debris or space objects with a little more accuracy than they are doing now, they can save a lot of money. Also, space debris creates more space debris. And it’s getting worse and worse. So unless we do something about it or do something to reduce space debris being generated in the future, it will get to the point where it’s very unsafe to go into space.”

Getting satellites into space can be costly and time-consuming, which has opened the door for CubeSats to gain momentum in the academic community. The small square satellites fit in the palm of your hand and, in many cases, can be built within the span of a student’s academic career.

SSE graduate student Vidur Kaushish has been working on NPSCuL since 2009, and is looking forward to seeing the final product ready for the August launch. He and Lan are proud to have the opportunity for something they worked on to make it into space. The hands-on component of their program is something that both find exciting and unique.

“A lot of the hands on work has been done by us,” explained Kaushish. “We’ve actually built it up, tested it, made sure to incorporate any minor design changes that were required, and basically just pushed it forward to get it to the point where it can go to space.

“In the past two and a half years,” he added, “I have been involved with designing, building and testing hardware, managing the budget and interfacing with the various external organizations that are involved in the first flight of NPSCuL.”

The NPS SSAG is adamant about student involvement, explained Newman. From concept to launch to on-orbit operations, the objective is educating future aerospace engineers and operators, both military and civilian, with an experience that prepares them for a career in the industry.

“Part of the educational value of working on NPSCuL is that our students have the opportunity to interact with the real space community,” explained Newman. “They meet and work with professionals at United Launch Alliance, Boeing, the Space Test Program, the NRO, the National Research Lab, and others.”

Another educational opportunity can be found in the pressure of working with expensive equipment. Plenty can go wrong before and after the hardware makes it into space, explained Newman, but the students are highly capable, and the equipment extensively tested to help reduce costly mishaps. He noted that the inevitable failures during ground testing are used as learning opportunities, giving students the freedom to take calculated risks and be innovative thinkers.

“They get the hands on opportunity to work with real flight hardware. These parts are worth millions of dollars and you get to the point where you really can’t afford to make mistakes. So they also get to enjoy the stress of the real world.

“Although we are an educational institution, and education is our primary function, we are also trying to produce real hardware that will fly in space,” he continued. “And that pressure of producing real flight hardware is actually a valuable part of their education. Both military and civilian students are going to leave here as truly experienced space professionals.”

For Kaushish, this project signifies more than just the culmination of years of hard work. He is proud to have the opportunity to have done something that not many people have.

“It’s been a lifelong dream to actually work with something that gets to fly in space,” explained Kaushish. “To see that come to this point, where we are really close to a launch, is really exciting.”