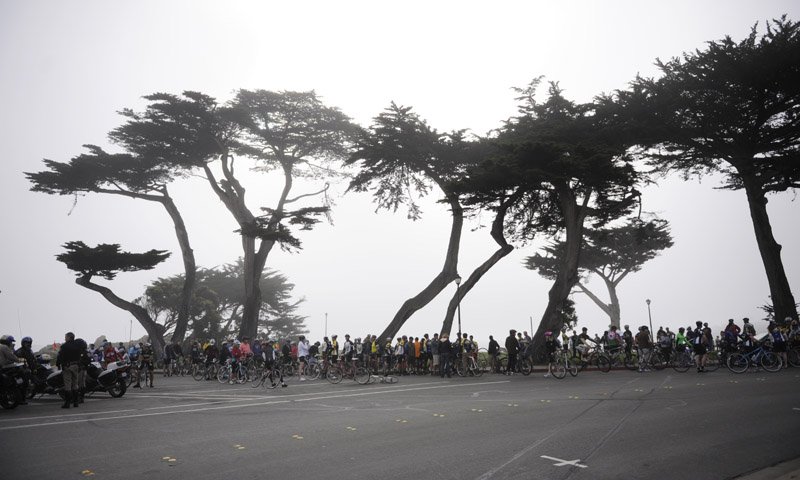 Members of the Naval Postgraduate School (NPS) and Monterey Bay communities gather for a tribute ride honoring the late Capt. Alan "Dex" Poindexter, July 21, 2012 at Lovers Point in Pacific Grove, Calif. The Cycling Club hosted the community ride to honor Poindexter, the late NPS Dean of Students and Executive Director of Programs, which included a brief prayer and moment of silence on the steps of Herrmann Hall.

On Saturday, July 21, close to 200 members of the Naval Postgraduate School and local communities made their way from Lovers Point to NPS to pay tribute to the late Capt. Alan "Dex" Poindexter, the university’s beloved Dean of Students and retired astronaut.

The NPS Cycling Club hosted the Capt. Alan Poindexter Tribute Ride, led by NPS Cycling Club President, Air Force Capt. Nolan Semrau and Naval Support Activity Monterey Commanding Officer Capt. Gerral David, and invited the community to celebrate Poindexter’s life through one of his favorite pastimes. Across the park, hardly a sad face could be seen as happy memories were shared of the man who touched so many lives across the Peninsula and the country. Semrau fondly recalled Poindexter’s earlier days with the club.

“Capt. Poindexter was a very active member of the NPS Cycling Club from the time he arrived as the Dean of Students in 2011. I recall one of his early rides with the club, if not the first … we lost him on the route,” said Semrau, who is a space systems engineering student at NPS. “The club's intention is to ride as a group and we try not to ‘drop’ riders, and certainly not the Dean of Students. We were able to quickly track him down, and he laughed it off and had been riding with us since on a weekly basis! He particularly enjoyed long bike rides and he was great company when bicycling for hours.”

Cycling Club Public Affairs Officer Lt. Angela Lefler, a student in the meteorology and oceanography department, noted that Poindexter’s support for the club was invaluable, and his upbeat energy and love for the outdoors inspired the group. 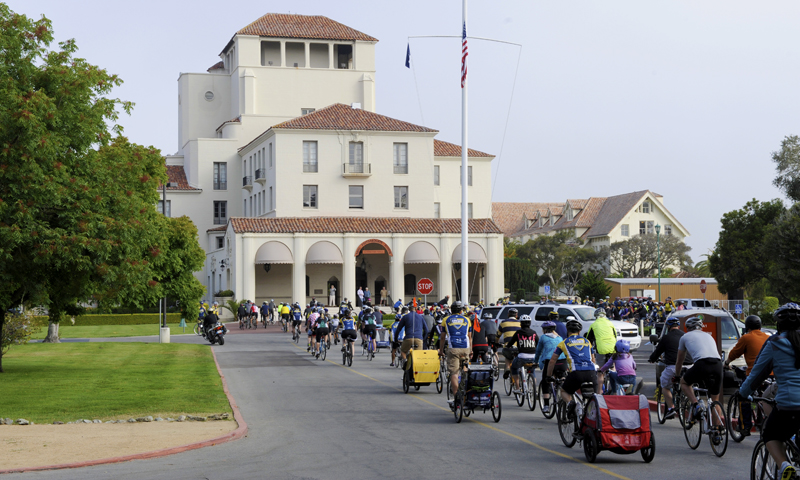 Nearly 200 cyclists from the Naval Postgraduate School (NPS) and local communities arrive at the flagpole on the NPS campus for a brief prayer and moment of silence during a Tribute Ride for the late Capt. Alan "Dex" Poindexter. The Cycling Club hosted the community ride to honor Poindexter, the late NPS Dean of Students and Executive Director of Programs.

“The NPS cycling club really felt the tragic loss of Capt. Poindexter. He was a cherished and heavily-involved member of the NPS cycling family. He served as both an inspirational leader and a mentor to me and my fellow cyclists,” said Lefler. “He was always quick to support our physical endeavors and almost always attended our group rides, regardless of how busy his work schedule was."

“Since he was very involved with the club, both as a leader and a rider, the NPS Cycling Club Board members felt the most appropriate way to pay our respects to his memory was through a ride that included everybody in the community,” she continued. “This ride was opened to the off-campus community because he was actively involved with local clubs just as much as our cycling club. And we decided to call it a ‘tribute’ instead of a ‘memorial’ because it sounded more upbeat and fun, and that’s what Dex would want the ride to be.”

The nearly 10-mile ride began and ended at Lovers Point, with a stop on the steps of the Naval Postgraduate School’s Herrmann Hall for a moment of silence and a prayer by the university chaplain, followed by the sounding of Taps.