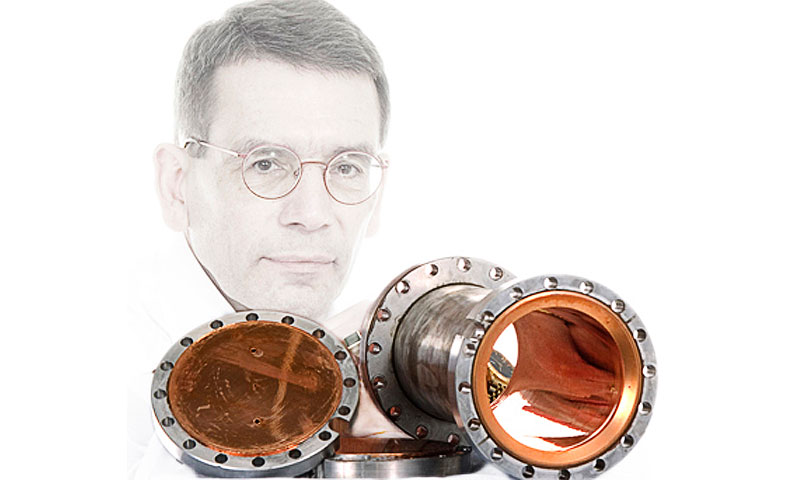 Naval Postgraduate School Vice President and Dean of Research Karl van Bibber with the prototype microwave cavities, which led to the construction of the twelve-ton Axion Dark Matter eXperiment (ADMX).

Cosmologists and astrophysicists recently came to the astounding realization that the expansion of space-time is accelerating and that everything we can see and measure in the universe accounts for only 4 percent of it. And for the past two decades, Naval Postgraduate School Vice President and Dean of Research Dr. Karl van Bibber has been looking for the other 96 percent – or, to be more precise, the one quarter of the other 96 percent now held to be composed of “dark matter.”

With round red Harry Potter glasses and a contagious zest for the quest for the “dark” force, van Bibber seems straight out of Central Casting to oversee all research at DoD’s graduate national security research university.

“The realization that all the observable matter and energy in the universe – the Earth, the Sun, all the stars, galaxies and clusters -– is only the tip of the iceberg, was like a collective ‘Houston, we’ve got a Big Problem’”, van Bibber said. “What this means is that our view of physical reality is profoundly wrong, or at least profoundly incomplete, and that the vast majority of the Universe has yet to be observed, let alone understood.”

To try to directly detect and begin to understand “the rest of the story,” van Bibber designed and led the first experiment searching for the axion, one of two leading candidates hypothesized to constitute the elusive “dark matter” of the universe.

“In the mid 1980s, I became intrigued with the axion, a hypothetical particle that pops out of our best theoretical solution to a problem with the strong interaction – that the strong nuclear force obeys a symmetry with no known good cause, which should be broken. If it exists, the axion would enforce that symmetry,” van Bibber explained. “Furthermore, axions would have been produced copiously in the Big Bang and thus the axion represents an ideal candidate to solve the dark matter problem – two major conundrums solved for the price of one!”

Axions are light chargeless particles, so light – a trillion times less in mass than the electron – and so weakly interacting with ordinary matter that we thought we would only be able to ‘see’ them indirectly, by their gravitational effects. But in 1983, Pierre Sikivie, a theorist, showed that axions could resonantly convert into photons in a microwave cavity immersed in a strong magnetic field. A couple of small pilot experiments were mounted in the late 1980s, with microwave cavities about the size of a coffee pot.

“But in April of 1989, about 30 particle physicists and technologists got together at Brookhaven National Laboratories to brainstorm about how to build a large enough and sensitive enough experiment to see the axion,” he recalled. “I had not expected to end up leading up the effort which came out of that meeting, the Axion Dark Matter eXperiment (ADMX), so I recruited Les Rosenberg, a former student of ours at Stanford University to serve as co-spokesperson with me. We built a new, large superconducting magnet at Lawrence Livermore National Laboratory, and by late 1995 we were operational with partners MIT, where Les was on the faculty, and the University of Florida.

“To have any chance of seeing the axion, not only must you build the largest and strongest magnetic field you can afford, but you also need the world’s quietest possible microwave amplifiers, which one of our team developed for the experiment.” Termed SQUIDs, for Superconducting QUantum Interference Devices, their intrinsic noise is at the theoretical minimum limit set by physics. “And on top of all that, the whole experiment must be cooled to near absolute zero, to reduce the thermal noise background that would otherwise drown out the axion’s signal.”

And how weak is weak? “The signal we’re looking for is unbelievably weak,” van Bibber said. “Let me put it this way. In 2001 we received the last signal from the failing 4-watt transmitter on board Pioneer 10, launched in 1972, and which was then far outside the orbit of Pluto. That signal received at earth was a billionth of a trillionth of a watt. The signal we’re looking for is another factor of ten or hundred weaker. And by the way, we don’t know the frequency! We need to tune the experiment very slowly, like tuning your car radio far out in the desert trying to find a radio station.”

And what have they found?

“Solid progress has been made in the search for the axion on all fronts, but so far we’ve seen nothing – no axions so far over an octave in frequency, or equivalently, mass,” van Bibber said with surprising enthusiasm. “But we’ve only covered a part of the mass spectrum where we might hear the signal. The great thing about this experiment is, either we’ll find it or, when we’ve checked the whole spectrum, which should be in about ten years, we’ll be able to say for certain that it doesn’t exist. So from the perspective of scientific understanding, it’s a win-win.”

Experiments attempting to detect another major candidate for “dark matter” – called Weakly Interacting Massive Particles, or WIMPs – which are conducted deep underground in mines to screen out cosmic radiation -- also so far have found nothing. “But those are expected to be extremely rare probability events and they also need to build more massive and quieter detectors as well,” van Bibber explained. “In our case, we need to push the axion experiment on two fronts – reduce the system noise temperature even further down, and extend the frequency search further up, and possibly down too.”

And what would it mean if no axions or WIMPs are detected? “What we think is the dark matter might not be a particle at all,” van Bibber said. “There are other theories that might account for the phenomenon, for instance that the Universe could have a different number of dimensions other than ‘3 plus 1’ [the three dimensions of space plus time], and the regions of the universe with greater apparent gravitational mass just might be where those sheets, or ‘branes’, of other dimensions might be closer together.”

Van Bibber and his co-experimenters have come a long way since their first paper on the quest to detect “dark matter” was published in 1998.

Their pioneering search for the axion is featured in the newly published book, “The 4% Universe: Dark Matter, Dark Energy and the Race to Discover the Rest of Reality” by acclaimed science writer Richard Panek (Houghton Mifflin Harcourt, 2011).

In addition to dark matter, even more mysterious and elusive is the “dark energy” that observations and calculations predict makes up nearly three fourths of the unseen reality that barely, if at all, interacts with “our” four percent.

Van Bibber explained that it is now known that the Universe crossed the tipping point about 6 billion years ago – 8 billion years into its existence – when the expansive “dark energy” force overcame the attractive force of gravity and the expansion began to accelerate.

“So far, there haven’t been any experiments to look for the dark energy,” van Bibber said, “because there aren’t any good theories to tell us what to look for.”

Van Bibber has kept up his involvement with ADMX and the overall axion enterprise world wide while in his position at NPS. He is a collaborator on the search for axions emitted from the Sun’s core, taking place at CERN in Geneva for which he wrote a seminal paper in 1989, and he recently returned from giving a presentation on ultra-sensitive axion searches to a meeting of the Korean Physical Society, last month.

“The [South] Koreans are now poised to enter the dark matter game in a very big way,” he said.

Does van Bibber sense any tension between his basic science interests and his passion for NPS’ highly applied, mission-driven science and technology research?

“Not at all,” he said without hesitation. “To the contrary, there’s a profound connection between the most basic and fundamental science, and the very best operationally-focused applied science, and this is a deeply enshrined tradition in the Navy. This basic applied nexus is what distinguishes our faculty, and why the Navy is a leader in research. Albert Michelson, a Prussian-born U.S. naval officer, is generally regarded as the father of American naval research. His precision experiments on the speed of light, for which he was awarded the Nobel prize in 1907, established the basis for Einstein’s theory of relativity. And being recommissioned as a commander in World War I, he was responsible for many innovations in naval warfare such as a precision range finder for gunnery. And there’s someone I knew personally, Lt. Cmdr. Joe Weber, a 1943 NPS graduate whose picture is on one of the historical posters on Root Hall, who survived the sinking of the USS Lexington in World War II. Weber later became a professor at the University of Maryland, and is acclaimed as the father of gravitational radiation research.”

Van Bibber earned his Ph.D. in physics as well as Bachelor degrees in both physics and mathematics from MIT, and did postdoctoral research at the Lawrence Berkeley National Laboratory (LBNL). Before coming to NPS, he served in a number of top positions at Lawrence Livermore National Laboratory (LLNL), including Chief Scientist of the Physical and Life Sciences Directorate, and Deputy Director of the Laboratory Science and Technology Office. Prior to his tenure at LLNL, van Bibber was an Assistant Professor of Physics at Stanford University, lectured at the University of California at Berkeley, and was an instructor in MIT’s Department of Physics.

Van Bibber is a Fellow of the American Association for the Advancement of Science, which he earned for distinguished contributions to astrophysics and particle accelerator physics. He was also elected a Fellow of the American Physical Society for his “leadership in an ultra-sensitive search for dark-matter axions, and the conception of other elegant experiments for the detection of the axion.”