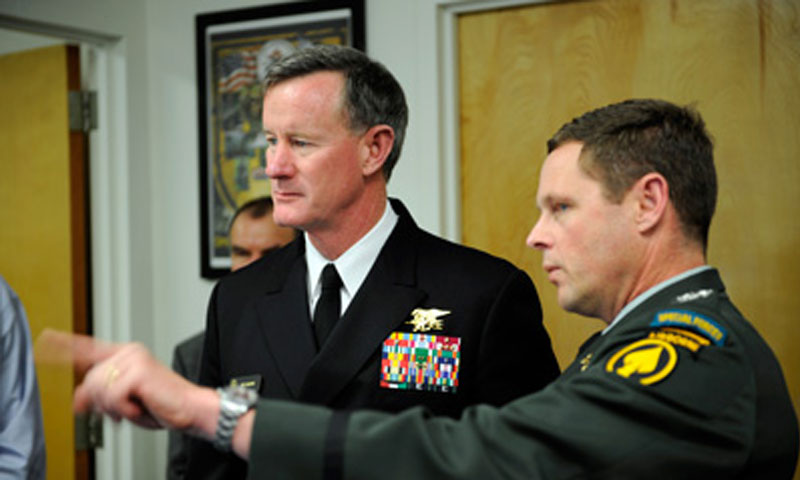 In an effort to continue to bolster the program that United States Special Operations Command (USSOCOM) Commander Adm. William McRaven himself graduated from, the Naval Postgraduate School Defense Analysis (DA) department has found an exciting new way to expose recent graduates to strategic and operational special operations commands and network them back to academia.

“The DA special operations and irregular warfare master’s degree is the flagship program for educating SOCOM’s future leadership. We saw an opportunity with guys who didn’t have to get right out to an operational assignment,” explained Wilson. “There is such a demand forward with all of our operational headquarters. It just became clear that we could push our graduates out there and develop this program to help scratch that itch, rather than having them disappear back into the formations while awaiting their key developmental jobs. We knew they might not have another opportunity to do something like this.”

Wilson connected with various commands, like the USSOCOM Headquarters (HQ) in Tampa, Fla., looking for environments where the students and sponsors could mutually benefit from the experience. The most recent group to complete their internships included three students sent to USSOCOM HQ, three to Afghanistan — two to the Combined Joint Special Operations Task Force-Afghanistan (CJSOTF-A) and one to Combined Forces Special Operations Component Command-Afghanistan (CFSOCC-A) – one to the Joint Special Operations Task Force-Philippines (JSOTF-P), two to the NATO SOF Headquarters in Belgium, one to the National Capital Region, one to Colombia and three to the NPS CORE Lab.   Six officers remained in Monterey to attend language training at the Defense Language Institute.

“I was assigned to the CFSOCC-A Commanders Initiative Group (CIG) and subsequently the J5 Future Plans,” said Maj. Damon “Sam” Robins, one of the interns from the most recent cohort. “I was given complete support to pursue research on special operations forces and conventional forces (CF) integration in Village Stability Operations (VSO).  This included permission to travel across the combined/joint operations area in Afghanistan to interview SOF and CF soldiers and officers to obtain their thoughts and compile observations and lessons learned.

“From this research and scouring of numerous published lessons learned documents, I wrote a lessons learned document that has been published in the SOCOM lessons learned portal as well as the Center for Army Lessons Learned,” Robins added. “In addition to this work, I was tasked on multiple occasions to conduct research for the command with respect to the Afghan local police effectiveness and the level of understanding of the VSO program. This program absolutely enhanced my experience at NPS.  I was able to apply the learning through research and writing while obtaining a macro view of the SOF community.”

Wilson noted that the value of the work being done by the interns, like Robins, not only enhances the students’ experiences, but also helps build a bridge between NPS and the USSOCOM community.

“Maj. Sam Robin’s work is a big deal for our future strategy in Afghanistan,” Wilson explained. “Enabling our Afghan partners to defend against Taliban influence is job one and VSO is the way we do this in the rural areas.  As we down size the U.S. footprint in Afghanistan, integration between SOF and conventional forces in support of VSO will increase in importance.  Sam’s research provides valuable guideposts for optimizing how we prepare for and execute this vital mission.”

The program has seen tremendous growth, largely by word-of-mouth. Part of the appeal, Wilson explained, is that the interns bring with them their fresh academic background and unique perspectives.

“They get to come in with fresh eyes, and be problem solvers involved in things that typically your staff officer wouldn’t get a chance to do,” Wilson explained. “That’s the real value of it. When the student completes the 18-month program, he has really gotten to think about things in an academic setting, and had a chance to apply those critical thinking skills in that setting. I really think it helps round out the student. We had one student sent to the national capital region, to the Office of the Secretary of Defense for Special Operations, and he had a chance to interact at the policy level. He would never have had that opportunity at this stage in his career without doing an internship to a location like that.”

In addition to helping further students in their careers, Wilson’s goal with the program is to support McRaven in having the most capable, educated force possible. Maj. David Ohearn was one of four interns to work with the CORE Lab, and served on the Global SOF Operational Planning Team (OPT). Ohearn explained that the appeal of the program was the opportunity to see the inner-workings of a strategic special operations command.

“I thought that this opportunity would broaden my educational experience by seeing how business is conducted when addressing policy and strategic objectives,” Ohearn explained. “The OPT's primary mission was to develop a plan that supported Adm. McRaven's initiative of expanding or ‘thickening’ the Global SOF Network. This initiative required the OPT to look at how the SOF Enterprise can better manage existing resources, and influence existing partnerships, both interagency and international, to achieve strategic objectives.

With the most recent group of 15 interns deployed globally and networked back to the defense analysis department, the largest to date, Wilson is hopeful that the program will continue to grow, but still keep the element of exclusivity that makes the opportunity, and those selected, unique. As Wilson noted, the Special Operations and Irregular Warfare Master’s Degree program, followed by an internship opportunity, is a powerful combination in building SOCOM’s intellectual capital.