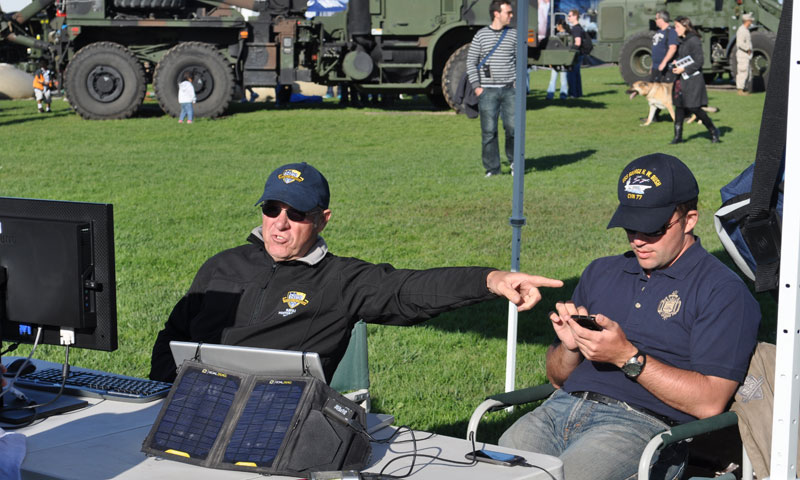 In late 2004, a 9.0 magnitude earthquake struck the Indian Ocean, setting off a series of tsunamis that would devastate coastal cities in 11 countries – from Thailand to Africa.  That event, and a trip to Thailand only days later would change the course of Naval Postgraduate School (NPS) Researcher Brian Steckler’s career, and simultaneously put NPS on the forefront of communications technologies for humanitarian relief and disaster response (HA/DR) missions.

Before the tsunami, Steckler was scheduled to meet with the Royal Thai Armed Forces the following week to deliver a ‘network-in-a-box’ technology that would provide remote surveillance capabilities for the desolate boarders between Thailand and Myanmar. But the disaster was a game-changer, and Steckler got to work re-purposing the network-in-a-box from surveillance to emergency response, adapting it to serve as a mobile communication and command capability for Thailand’s emergency responders.

Today, that design has developed into a suite of equipment, including a multi-dimensional Emergency Operations Center (EOC) that can be fit into airline-checkable boxes weighing less than 100 lbs. each. The self-contained system is at-the-ready to be deployed should disaster strike, as it did most recently in Haiti and in the cities of Bay St Louis and Waveland, Miss. on the U.S. Gulf Coast following Hurricane Katrina. In response to both disasters, Steckler and NPS’ Hastily Formed Network (HFN) team of students and faculty were able to provide communications capabilities where emergency responders needed them most in just hours after arrival.

“We want to shrink what the Department of Defense (DoD) takes out to a disaster zone in big planes and forklifts and huge cases, into small enough cases that they can be checked on as checkable airline luggage,” Steckler explained. “And we have three main capabilities that we want to bring with us … alternate power, completely self-contained communications, and then a back office in a box with virtual servers, applications and desktops using VMWare. It allows you to basically replicate your servers, Microsoft Office applications, your Outlook e-mail, your calendar, your 911 call system and other back office applications. Rather than having big servers on a rack in your IT facility, we shrunk all of that down into a ‘fly away’ kit.”

Now, the team is looking to proactively equip the Monterey County’s emergency responders with their own EOC-in-a-box, to reduce the impact of a delay in service in the event of a local emergency. NPS Information Sciences Lecturer Albert “Buddy” Barreto is a key member of the HFN team, and a leader in developing the EOC-in-a-box’s network capabilities.

“You might not be all comfy in a building, you might be sitting in a trailer someplace or you might be in a tent,” said Barreto. “You might be exposed to the elements, but if you have connectivity, and access to your communications system and to your emergency management system that can track your resources, then you are able to at least get by.

"Another use is the sensor networks and other systems that people use to monitor traffic lights and all of those kinds of things,” he continued. “If you lose that capability, you don’t know what’s working and what isn’t working with your infrastructure. So this unit could house the software that manages those types of things.”

Many people don’t think about the communications side of a disaster, Steckler noted, which, in many cases, means phone lines are down, 911 call centers are inoperable, and a lack of network connectivity leaves first-responders unsure of which local hospitals are still up and running. Coordinating rescue efforts without communication tools is incredibly difficult, if not impossible.

Since the 2004 tsunami, Steckler has been funded by the Office of the Secretary of Defense to continue to explore the potential of these systems, and to further the DoD’s impact in HA/DR operations. His work, paired with experienced NPS students and faculty who are well versed in disaster response and preparedness, continue to shape the HFN’s capabilities and develop new technologies for local and international emergency response.

“Because of the expertise that we have here at NPS with wireless technologies and experience in real disasters,” Steckler said, “continuing to work in this space is both rewarding and educational for us and a great opportunity for hands-on thesis work for our students. And DoD is kind of reinventing themselves in HA/DR, as it’s now a major function within DoD.

“HA/DR is on par with our major warfighting specialties, surface warfare, air warfare and submarine warfare,” he continued. “The Chief of Naval Operations put this out in his ‘Sea Power for the 21st Century’ to document that very fact—that HA/DR for the Navy is becoming much more important than it ever was. As a result of the tsunami in south East Asia, Hurricane Katrina, and the earthquake in Haiti, Navy and DoD involvement are growing.”

In addition to growing DoD disaster response capabilities, NPS is looking to help share the idea with partner countries, giving international students the tools to take the HA/DR concepts back to their own militaries. One of those students is Argentinian Army Lt. Col. Marcelo Perfetti, a Communication Officer studying Information Systems Technology Management at NPS, and developing his thesis around humanitarian assistance and disaster relief technologies and capabilities. He is set to graduate next year, and explained how his time studying hastily formed networks will be valuable to the Argentinian Army as they explore their own emergency response capabilities. 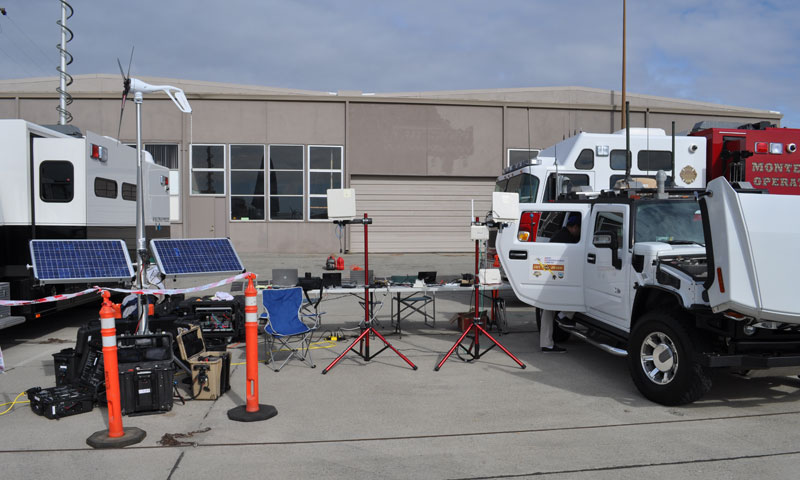 Ready to deploy at a moment’s notice, NPS’ Hastily Formed Networks team has developed a self-contained Emergency Operations Center, which can be transported in airline-checkable luggage and used as mobile communications center in disaster and emergency response efforts worldwide. Here, the equipment is seen between emergency response vehicles for the city of Salinas, Calif. during an test-run with the Salinas Air Show.

“Since the beginning of this century, the Argentine Army has begun to use commercial, off-the-shelf products and equipment in order to provide better communication systems to support HA/DR operations,” Perfetti explained. “The Argentine Army has a special interest in developing better communication solutions for HA/DR operations, where military, governmental and non-governmental organizations are involved. Given the large experience of the Hastily Formed Networks center at NPS in Hurricane Katrina and the Haiti earthquake, the Argentine Army has sent communication officers to learn cutting-edge technologies and techniques at NPS since 2005. My goal is to acquire and transmit as much knowledge as possible to develop and improve the efficiency of HFN in the Argentine environment.”

Student involvement is key, Barreto noted, and the program would not be possible without the experience, expertise, and involvement of NPS’ young military officers, both U.S. and international.

“We could not do what we do without the students,” said Barreto. “If we were a purely research institution and didn’t have the students and it was just a group of faculty working on research, we would not get nearly the return on investment that we get now. The students bring in their expertise, they bring their problem sets to us, they let us know when we are going awry, they let us know that we’re hitting a home run and they have opportunities to go back to their commands as sponsors to provide funding for us.

“They have master’s theses that then get worked on and developed further by the next generation of students that comes in,” he continued. “So we have evolutionary papers that continue to evolve. The students are absolutely mission critical and the number one asset for our success.”