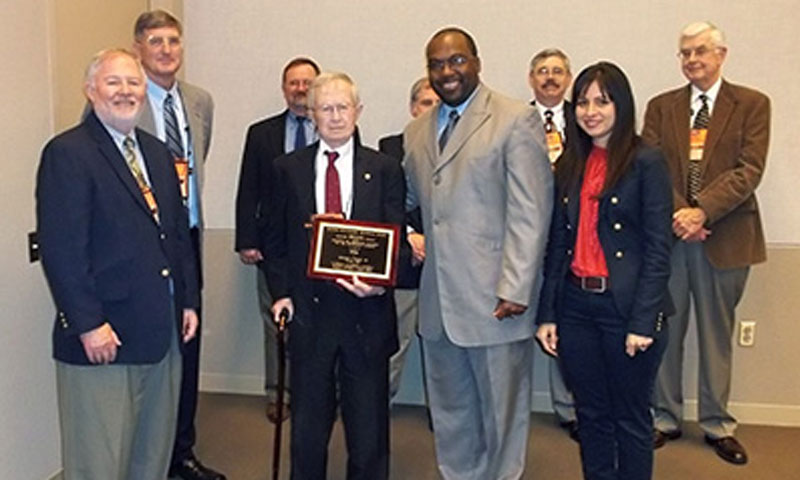 NPS Distinguished Professor Donald Gaver, center, has been awarded the 2012 Military Applications Society of INFORMS J. Steinhardt Prize, recognizing lifetime achievement in the field of operations research. The award marks the third time in a row, and the fourth time overall, that NPS faculty have been selected for the honor.

NPS Distinguished Professor Donald Gaver has been awarded the 2012 Military Applications Society of INFORMS J. Steinhardt Prize. The award recognizes individuals for lifetime achievements in the field of operations research (OR), and was presented during the INFORMS Annual Meeting, Oct. 15 in Phoenix, Ariz.

The award is an exciting one for the NPS OR department as it marks the third time in a row, and the fifth time overall, that the university’s faculty have been selected for the honor. Past recipients include former NPS Provost Dr. Jack Borsting, Professor of Practice Wayne Hughes, and Distinguished Professors Dave Schrady and Al Washburn.

“Distinguished Professor Gaver is most deserving of this award,” said OR Chairman and Professor Robert Dell. “He is a well-known name in operations research and has been so for more than four decades. He has made many substantive contributions to our nation’s military capability and he is still actively contributing. We are extremely fortunate to have had him in our professional and scholarly ranks so long, and have benefited greatly from his substantive contributions.”

Gaver first studied operations research as a master’s student at the Massachusetts Institute of Technology, and went on to incorporate it in his mathematics studies at Princeton University, where he received his Ph.D.

“I am pleased and very grateful to have been selected for this award. The operations research field is a way of using mathematics and science to deal with operations, whether military or civilian,” said Gaver. “Its practical uses can include helping to provide scientific guidance into the procurement and employment of weapons systems, or civilian systems like highways and such. I got into this field because it just seemed like an ideal combination of objectives.”

The prize is named for Jacinto Steinhardt, a founding member of the Operations Research Society of America who worked extensively on the philosophy and application of military operations research. Gaver worked with Steinhardt during his time at the Operations Evaluation Group, which later became the Center for Naval Analyses.

Steinhardt is also credited with joining then NPS Superintendent Rear Admiral E.E. Herman to develop a comprehensive OR curriculum for naval officers several decades ago. Dell explains how the connection makes the department particularly proud, and demonstrates that the core of the program has thrived at the institution since the 1950s.

“The award is particularly meaningful for the operations research department because Jay Steinhardt helped propose and design the operations research degree program at NPS in 1951, with the first class of nine naval officers graduating in 1953,” Dell said. “We now have well over 4,300 graduates from all four U.S. military services, as well as those of 56 other countries.”

Gaver’s friend and colleague, OR Distinguished Professor Patricia Jacobs, spoke highly of his career and achievements.

“Distinguished Professor Gaver’s innovations in stochastic models, data and decision analysis, and in simulation, are internationally recognized and have been applied worldwide in areas ranging from nuclear reactor safety to complex-system reliability, telecommunications and maritime problems,” said Jacobs.

“The Naval Postgraduate School has benefited from the many international visitors that Professor Gaver has attracted for consultations and collaborative work,” she added, “and he has been a valued consultant to many Department of Defense agencies and research organizations. Additionally, his service on National Research Council Panels and the Naval Studies Board has contributed to our nation’s security.”