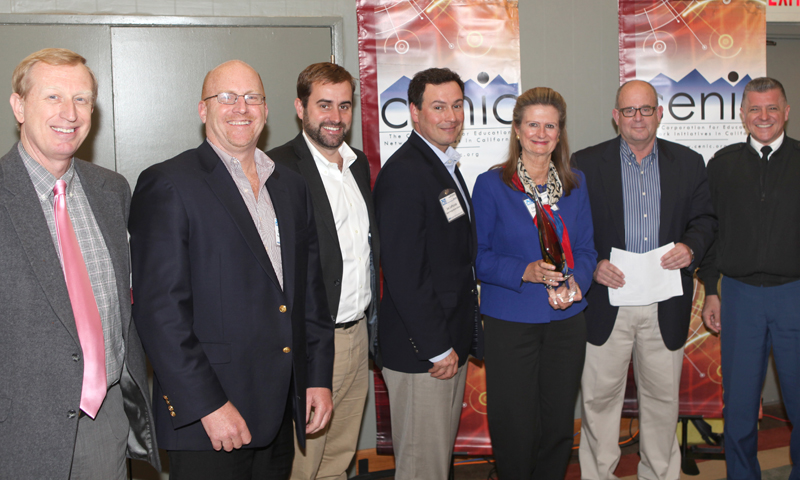 The award recognized the two institutions’ efforts to establish a regional academic network, executed with the completion of the NPS-assisted migration of the Army language school off the traditional .MIL military network to a more academic .EDU domain.

“This is a proud and celebratory moment for both NPS and the Defense Language Institute. CENIC has been an invaluable partner for both of our institutions,” said NPS Vice President, Information Resources and Chief Information Officer, Dr. Christine Haska. “By supporting our transition to a .EDU network, CENIC has empowered NPS and DLI to be more capable of accomplishing our respective missions in education and research. To be recognized by such a prestigious organization, and to be voted as the Network Innovations ‘best’ among an amazing group of institutions, is truly an honor.”

“I believe this project will serve as a model for others to follow. As we move into a more restrictive budget climate, it is important to find innovative ideas to do more with less,” echoed Col. Danial Pick, Commandant of DLIFLC. “Over the next year, a combined team of NPS and DLI technicians and academicians will build a new computing environment that will significantly improve the ability of DLI to fulfill its mission of enhancing the linguistic readiness of our nation,” he continued.

NPS President Dan Oliver praised the effort, noting that it is a critical step toward a consistent, active partnership among local DOD institutions, a notion local Congressman Sam Farr (D-17), has emphasized with his Team Monterey concept.

“As the DoD and leadership of our country shift the defense strategy, it is going to become increasingly important to streamline operations at local levels to ensure that we are collectively good stewards of the taxpayer’s money,” said Oliver. “The Team Monterey Academic Network is a perfect example of how operational efficiencies can be achieved through strategic partnerships.”

Approximately 3,800 Soldiers, Sailors, Marines and Airmen are enrolled at DLIFLC, studying 23 languages and two dialects. Both institutions have been working since 2008 on the effort to establish a single academic network to enable students to leverage modern technologies and improve capabilities.

While critical to DOD functions, officials noted that the increasingly rigid security posture of defense networks began to have an adverse affect on the ability for DLIFLC to fully leverage technology in both its resident and distributed learning programs. With the military’s need for qualified linguists at an all time high, DLIFLC saw an opportunity to partner with NPS, which has been on an academic network for many years.

In addition to more access, providing resident students with a robust connection like CENIC simply provides quicker response with speeds up to 40 times faster than what was available on the legacy network. The 15-30 minutes of saved class time a day results in the equivalent of extending the resident program by two weeks. And the improvements were well recognized by students participating in pilot deployments of the project.

“This innovation lets us go on to open-source websites in order to quickly gather the information we need and link up with websites that have our target language on them,” said Army Sgt. Noah Mott, a Dari student. “We as a military unit have been able to use them in a way that better helps us understand our foreign language.”

Beyond benefits to the educational mission, the two institutions have combined some related operations to realize significant cost savings as well. By combining data center operations, some cyber security systems and storage, NPS and DLIFLC expect to save between $2-4 million per year combined.