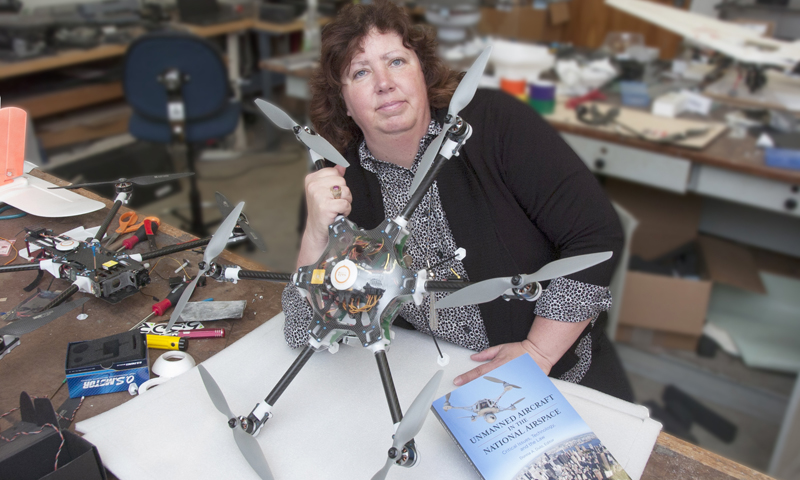 NPS doctoral student Donna A. Dulo has served as lead author and editor of the new book, “Unmanned Aircraft in the National Airspace: Critical Issues, Technology and the Law.” With the rapid advancement of unmanned aerial vehicle (UAV) technologies, Dulo hopes the work will drive much-needed conversation on broad gaps in existing law with regard to UAVs.

Naval Postgraduate School (NPS) doctoral student Donna A. Dulo is the lead author and editor of “Unmanned Aircraft in the National Airspace: Critical Issues, Technology and the Law,” published by the American Bar Association. The rapid advancement of unmanned aerial vehicles has led to wide gaps in existing law and policy, providing Dulo with just the motivation she needed to advance the conversation.

“I want this book to set the stage and create some legal frameworks … so that the industry can look at the book and follow it,” she said.

“Of course, everything has to have some sort of real-time control. The FAA [Federal Aviation Administration] has banned fully-automated flights, but that is going to change some time soon,” said Dulo. The FAA and lawmakers are both considering registration and air control measures to govern drone traffic. Those regulations will likely have second and third order affects that legal experts like Dulo will have to consider.

“As we get our airspace under control, bigger and even smaller drones will have to be controlled by air traffic control towers,” said Dulo.

When it comes to UAVs and the law, Dulo acknowledges that there is a lot of work that needs to be done. She likens current UAV law to the early tort law that developed around the railroad and manned aviation industries.

“The Wright brothers flew in 1903, but we didn’t have laws governing the safety of manned flight until the 1950s,” said Dulo.

And while Nijeholt’s work was revolutionary for its time, the law has adapted and evolved in the century since her treatise was first published.

“At that time, it wasn’t really safety issues that she was concerned with. She was more concerned with property rights,” Dulo explained. “We have that worked out so we’re looking more at air space integration, constitutional law issues, safety and security.”

But the issue surrounding drones that has garnered the most media attention in recent years is privacy.

“Privacy is a huge issue. If the government is operating the drone than we may have Fourth Amendment issues, but if a private citizen is using a drone we go into the area of privacy torts,” said Dulo.

Past case law, particularly in the areas of privacy, dealt with constitutional protections against intrusion, even visual intrusions, upon dwellings in areas where residents had a reasonable expectation of privacy. Courts considered everything from the constitutionality of listening devices outside of phone booths, to the use of thermal optics outside homes. The advent of drones and micro-drones has once again pushed the boundaries on these issues.

“With drones, you can really get up close and remain on station with some very sensitive equipment, which may raise Fourth Amendment or privacy tort concerns,” Dulo explained.

Still, Dulo insists that legal inquiries should not be limited to the privacy concerns that seem to be dominating current discussions about drone usage. “There is so much more involved with drones than privacy, particularly in the areas of safety and security. That’s really what we are working on here at NPS,” she said.

She notes that when considering drones and the law, the issues are not always cut and dry, and that there are shades of grey that will almost certainly keep legal experts up at night for years to come.

“In chapter 10 of my book, we look at a sort of hybrid consideration – the media. The media has a special role … For example, if the media goes into a building with the police using a media drone, they can be considered an arm of the police force,” said Dulo. “The media kind of floats in the middle between constitutional law and privacy torts depending upon the degree to which they are cooperating with law enforcement.”

This, and myriad other issues including the weaponization of unmanned aircraft, are discussed in great detail by Dulo and her co-authors in the new book. And while the conversation has just begun, Dulo says she and her colleagues look forward to breaking new ground in this exciting area of the law.