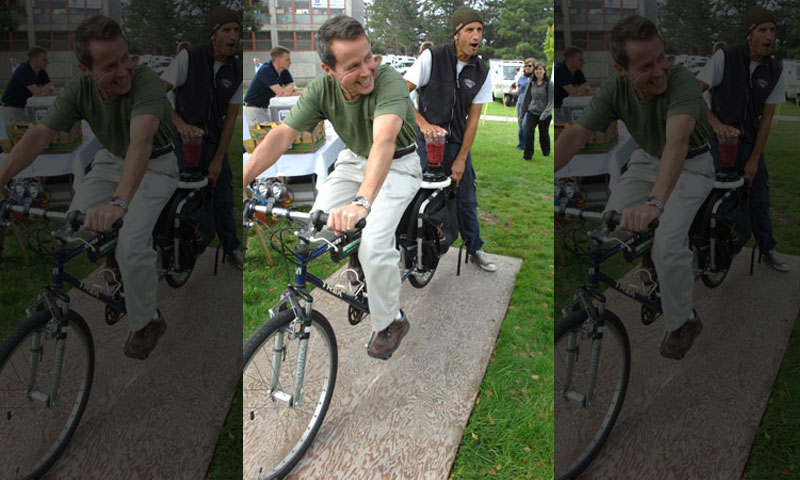 The Naval Postgraduate School and Naval Support Activity Monterey showcased a rainbow of green initiatives by the university and local technology vendors at the NPS Centennial Energy Fair, Oct. 22.

Navy blue is going green and a sea change in renewable energy and energy efficiency initiatives at the Naval Postgraduate School is helping it get there.

As the Navy unveiled its first “green” ship and the Secretary of the Navy announced the goal of increasing the service’s renewable energy use by 50 percent by 2010, NPS and Naval Support Activity Monterey showcased a rainbow of green initiatives by the university and local technology vendors at the NPS Centennial Energy Fair, Oct. 22.

“NPS actively seeks to be a leader in the Department of Defense sphere in energy research, by discovering and providing new knowledge in support of DoD interests and goals,” said Vice President and Dean of Research Karl van Bibber. “Energy is a primary national security issue and one of the three articulated priorities of the Secretary of the Navy due to the global effects of climate change and the fact that the U.S. still purchases a quarter of a trillion dollars in fossil fuels each year from some of the most troubled parts of the world."

And finally, a student who is building the liaison between the Departments of Defense and Energy at the National Renewable Energy Laboratory, and Mathematics Dept. Prof. Hong Zhou’s research on thermoelectric generators that convert temperature differences into electrical power and visa versa were also showcased during the event.

A few of the “green” initiatives already installed or planned for the command showcased at the Fair are adding solar panels to the Library, Halligan and Watkins Halls projected to generate between five and 15 percent of the energy requirements of the entire base, slated to begin in November; advanced water and energy meters covering 90 percent of NPS’ energy usage; and, steam trap and condensate return unit upgrades and installation of a summer boiler to provide high-efficiency steam during times of low load. 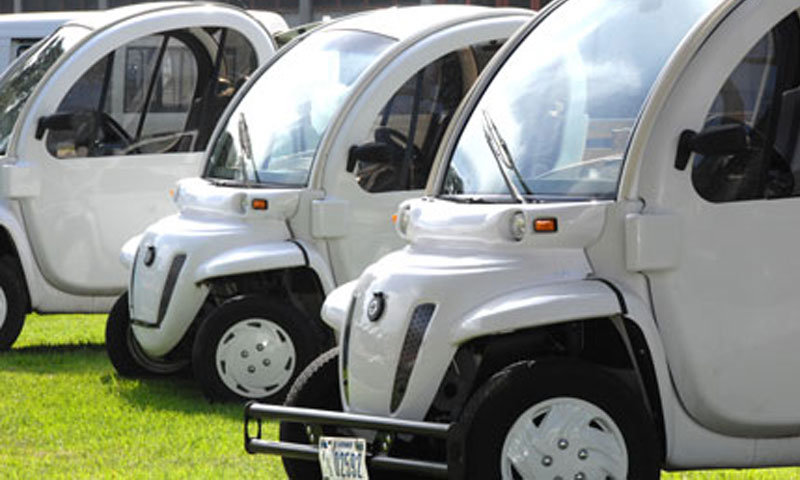 In addition, a base wide swap-out of conventional for high-efficiency bulbs in parking lot and street fixtures and installation of advanced lighting controls such as occupancy and day lighting sensors; the introduction of a fleet of near-silent Global Electric Motors (GEM) vehicles that look like miniature white VW “bugs”; and new Energy Management Control System upgrades to automate heating and air conditioning systems in two of the largest energy-using buildings on base are also planned.

A recent dredging of Lake Del Monte, which provides 99 percent of irrigation water for the campus; ground source heat pumps; and a near-complete energy audit of the entire base to identify yet additional energy savings are also part of the effort. Such initiatives earned the university’s support activity the Secretary of the Navy’s Small Shore Installation Energy Award for achieving a 20 percent energy savings.

The Centennial Energy Fair was co-sponsored by the Cebrowski Institute for Innovation and Information Superiority, PWD Monterey, and the NPS Alumni Relations Office/Centennial Headquarters.

“The Cebrowski Institute was thrilled to co-sponsor the Energy Fair because it’s a great venue to share the building excitement on campus for cross-disciplinary research on the multi-faceted energy issue,” said Institute Deputy Director Sue Higgins. Other key Cebrowski initiatives include the recent hosting of the Naval Energy Forum in the nation’s capital attended by 750 energy leaders including the Secretary of the Navy, Chief of Naval Operations and Commandant of the Marine Corps; and the expanding “Energy Conversation” think tank created and championed by Institute faculty member and former Deputy Undersecretary of the Navy Mitzi Wertheim. The most recent “Energy Conversation” event, also in Washington, was attended by 360 participants from all agencies and fields, including Rear Adm. Philip Hart Cullom of Fleet Readiness Division Navy Staff; Acting Deputy Assistant Secretary of the Air Force Michael McGhee; Marine Corps Assistant Deputy Commandant for Installations and Logistics Carla Lucchino; Deputy Assistant Commandant EI of the Coast Guard Jeffery Orner; and Dr. Kevin Geiss of the Army’s Installations and Environment office.

“We’re reaching critical mass,” Higgins said. “You can feel it!"