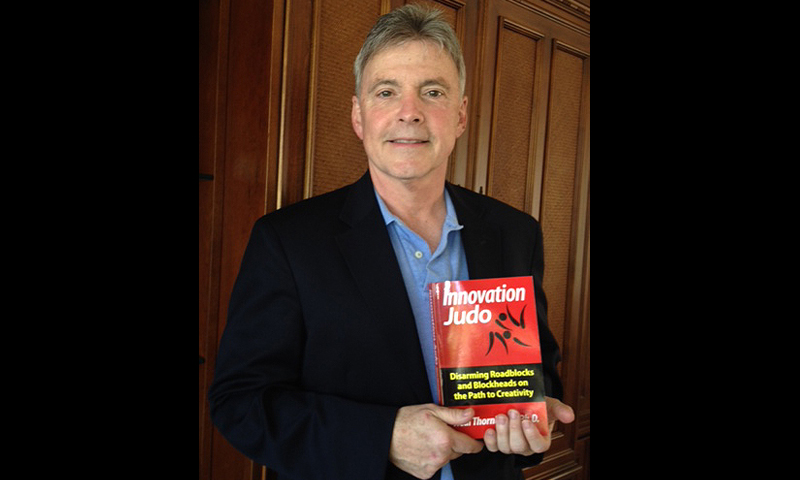 Dr. Neal Thornberry, program manager and Faculty Director of the Leading Innovation course in NPS’ Center for Executive Education poses with his most recent publication “Innovation Judo: Disarming Roadblocks and Blockheads on the Path to Creativity.” Thornberry has worked at NPS for several years, training high-ranking military officials with innovative strategies to problem solving.

“How do we find a way to organize our efforts, so that we can get a wounded soldier to a field hospital one minute faster?”

Dr. Neal Thornberry is the program manager and Faculty Director of the Leading Innovation course in NPS’ Center for Executive Education. In a sea of uncertainty and perhaps cynicism, Thornberry trains top military officials how to think and approach problem solving, like the one he posed above, from an innovative perspective.

“Innovation is a tool, not a destination,” said Thornberry. “We are asking people to be mission ready and to do more with less, to do it smarter, to manage a lot of business assets, billions of dollars and thousands of people. The origin of the course was to teach some innovation skills to senior officials so they can be more mission ready especially given the financial challenges the Navy is facing.

Thornberry recently published his second book, “Innovation Judo: Disarming Roadblocks and Blockheads on the Path to Creativity.” In it he presents strategies for creating positive change along with several examples of individuals who found a way to work within the constraints of heavily bureaucratic environments and to garner some big innovative wins in the process.

Retired Navy SEAL Walt Pullar III disclosed some of his challenges during and after his service in the Navy. Through Pullar’s work as a SEAL operator, he had the unique position to continue serving from an SOF acquisitions position.

One project that Pullar developed, was with special ops in developing a helmet that would provide greater ballistic protection. Through extensive testing, the prototype was proven to be significantly better with the exception of a few statistical outliers.

The testing office would not clear the prototype until it was developed completely, while Pullar believed that “it wasn’t perfect but it was good enough.” These helmets could potentially save lives while the red tape was slowing the project down.

Through heated debate and discussion, Pullar found an opening. He discovered that there was no limit to the number of prototypes that can be built. Thousands of prototypes later, the helmets are in the field saving lives.

Finding an opening, counter-balancing, leverage are all techniques in judo as a martial art. In Innovation Judo, Thornberry uses the methods of this fighting style as a means to create an opportunity in work to achieve mission accomplishment.

“In large organizations that have conservative methodology, it is difficult to execute innovative ideas when they occur.” Thornberry said.  “Innovators often have to resort to Innovation Judo skills when logic doesn’t work but they must do it in a right minded way.  These principles only work when the innovation is for the greater good and no harm is done to the organization legally, ethically, or morally.
Thornberry has been developing the Leading Innovation course over the past three years for NPS, while continually adapting the program to the most current advances in technology and global politics.

“Leaders come and go, but cultures are much slower to change,” said Thornberry. “ Because culture change is so difficult and takes so long, don’t just think about changing the culture, think about counter balancing it. You can’t get rid an organization of all its bureucray, but you can create a landscape that is still conducive to innovation.”

Thornberry also discusses the gains to be had in business. The entrepreneurial mind can look at innovation as a means to find opportunity for creating greater effectiveness, increased efficiency, saving money, or even saving lives.

“Innovation and entrepreneurial thinking, one without the other is fun but folly … Together the two find innovative solutions to problems that can save time, money and even lives,” Thornberry said.