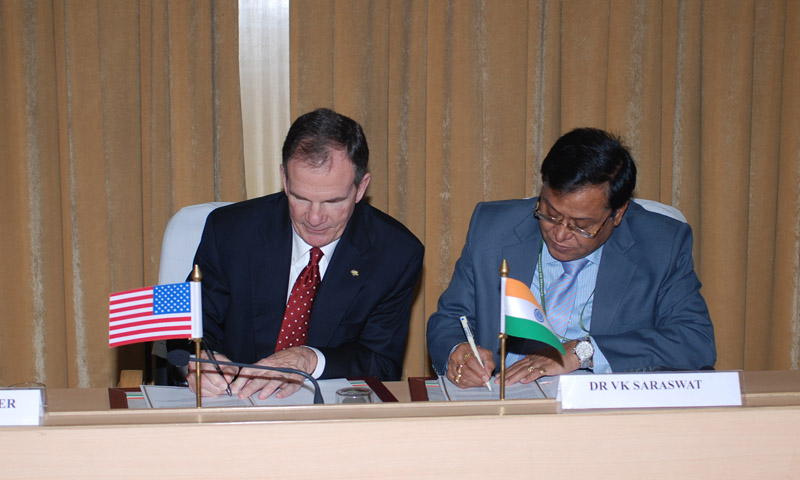 NPS President Dan Oliver, left, signs a Letter of Accord with the Director of India’s Defense Research and Development Organization (DRDO), General Dr. V. K. Saraswat, right, during a visit to India in March. DRDO is the southern Asian nation’s single research institution supporting all branches of their Armed Forces.

A new and promising partnership between NPS and India’s peer defense institutions has emerged in response to U.S. leaders calling for collaboration between the two countries. Last year, President Barack Obama recognized India as a growing global force, and a U.S. ally in meeting the challenges of the future.

“In Asia and around the world, India is not simply emerging; India has already emerged,” said Obama in a speech to the Indian Parliament at the Parliament House in New Dehli, Nov. 2010. “And it is my firm belief that the relationship between the United States and India — bound by our shared interests and values — will be one of the defining partnerships of the 21st century. This is the partnership I have come here to build. This is the vision that our nations can realize together.”

Former Chief of Naval Operations, Adm. Gary Roughead, echoed the sentiments of the President, noting that the waterways surrounding India are a crossroads for global commerce, communication and transportation. Maintaining a secure maritime domain in the region is a focus of both U.S. and Indian military leadership.

“We have many mutual interests as nations — from democracy to free trade to maritime security — and it is in the interests of American and Indian citizens that we come together to see that these interests are protected,” he noted during a visit to India in Apr. 2010.

As an institution focused on defense-relevant education, research and advanced technologies, NPS saw an opportunity to advance the partnerships between the two nations — to use its faculty expertise in nearly every aspect of national security operations to help develop a partnership in education and research with India’s Defense Research and Development Organization (DRDO), the nation’s single research institution supporting all branches of their Armed Forces.

“We currently only have two Indian students studying at NPS. India is a nation that has a population of 1.2 billion people. They are the largest democracy in the world,” explained Dr. Chuck Kimzey, Director of NPS’ National Security Institute. “So geopolitically, I think that building a relationship, and NPS contributing to that relationship, is important.

“The question becomes how can we contribute to the commander’s intent — in this case all the way up through the Navy and to the President of the United States — in contributing to building relationships with India? From NPS’ standpoint, the hammer we swing is education and research.”

In early 2011, NPS President Dan Oliver traveled to India to sign a Letter of Accord with the DRDO Director General Dr. V. K. Saraswat, outlining the plan to pursue joint efforts in research and education.

“We saw an opportunity to connect with India’s defense institutions not only because we have similar concerns – national security, counter-terrorism, economic stability – but because an academic partnership allows for the sharing of intellectual resources of benefit to both organizations,” said Oliver. “We already have Indian students enrolled in our resident programs at NPS, and while we certainly have the capacity to increase this number, we also felt we had a successful existing relationship upon which we could build and expand.”

Oliver was joined on the trip by NPS Mechanical and Aerospace Engineering Distinguished Professor Young Kwon, who shared with DRDO leaders some of the research expertise that NPS could bring to the table, in fields like nanomaterials and physics-based modeling and simulation.

"India has a great human and organizational infrastructure with many talented engineers and scientists,” said Kwon. “The partnership with India will allow NPS to tap into those assets. And NPS faculty and students have unique experiences and advanced knowledge that India’s defense institutions will benefit from as well.”

As an action item resulting from Oliver’s trip to explore different mechanisms of cooperation, NPS Distinguished Professor Brij Agrawal taught two short courses to DRDO engineers and scientist on adaptive optics and space operations in India.  The enthusiastic response of the Indian students suggested that this was a successful model for future engagement

The conversation has continued since Oliver returned from India, bringing DRDO and Defense Institute for Advanced Technology (DIAT) leaders to NPS this past September to give the leadership a chance to collaborate on the future goals of the partnership. DIAT is India’s equivalent to NPS, a graduate-level degree granting educational institution, and is part of the DRDO. To further formalize the educational relationship with DRDO, Dr. Prahlada, Vice Chancelor of DIAT, presented his wide-ranging suggestions to be included in a formal agreement between the two educational institutions during the visit. Among them was to explore a joint degree program modeled after the successful NPS/Temasek Defense Systems Institute of the National University of Singapore program.

“Since our initial visit to India, the Letter of Accord, and now with the recent proposal with DIAT, I have been very pleased to see the progress we have made in this effort,” said Oliver. “We have a solid plan in place to fully utilize subject matter experts from both institutions, delivering to both our students and theirs, a comprehensive and global perspective on defense studies. And I believe an important note is that this is a partnership that still remains in its early stages.” 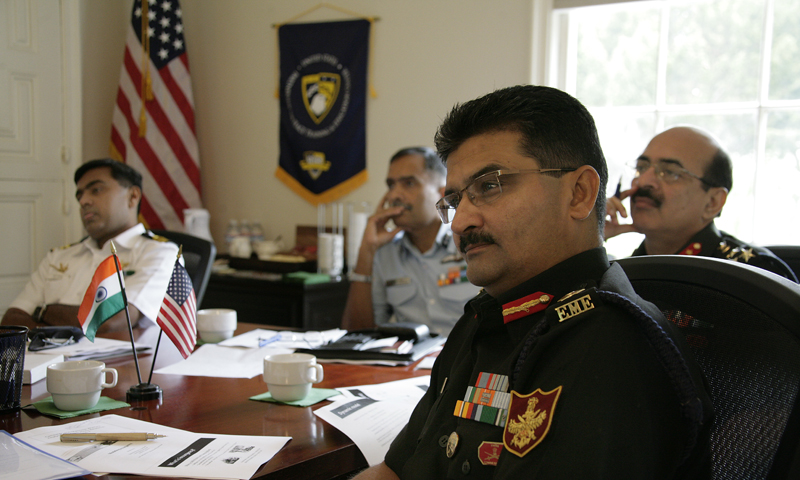 As part of the program for the Indian visit in September, NPS and DRDO co-sponsored a three-day workshop titled “Defeating Terrorism,” a forum where both defense research institutions can examine how they might pool their intellectual capital to contribute to reducing global terrorism. Kimzey, an active member of the partnership and director of the planning process, explained that the workshop was an opportunity to utilize the experience of both nations to provide new insights on research that could make an important contribution to both nation’s security threats.

The results of this workshop’s collaborative, idea-generating process were then presented to a senior leadership panel for prioritization.  For the U.S., this panel consisted of Dr. David Chu, President of the Institute for Defense Analysis; Rear Adm. Nevin Carr, Chief of Naval Research; Maj. Gen. Nick Justice, Commander of the U.S. Army Research, Development and Engineering Command; and Tom McNamara, Deputy Director of Intelligence and Director of the India Strategic Focus Group of the U.S. Pacific Command, among others.

On the Indian delegation’s final day of their visit to NPS, the DRDO and NPS Executive Committee assembled to oversee the execution of the partnership’s collaboration, and to outline action items that both institutions agreed to implement moving forward. Included in these items are developing formal proposals for collaborative research, exploring Indian participation in a dual-degree program, and assessing NPS’ short courses to be available to DRDO, among many others.

According to one of NPS’ current Indian students in the Defense Analysis curriculum, Air Force Wing Cmdr. Srinivas Ganapathiraju notes that, while both NPS and the Indian defense institutions bring unique experiences to the table, both also have several aligned goals.

“Being the two largest democracies in the world, American and Indian military officers share the same values and have converging ideas on a large number of global issues,” Ganapathiraju noted. “Both the militaries have had to counter religious extremism and fundamentalist ideologies, and have evolved strategies and tactics against them. They have learned to deliver the ‘iron fist in a velvet glove’ solution whether in Afghanistan or in Kashmir. With so many similarities, collaboration in research and education can help both the countries immensely.”

NPS Executive Vice President and Provost Leonard Ferrari, co-chair of the Executive Committee and a strong supporter of the collaboration, echoed that sentiment. Ferrari has long acknowledged NPS’ global capabilities, and the opportunities the university has to partner with nations across the world.

"Our latest visit with the Indian delegation was a great success. We were able to outline a solid plan for the future of this partnership, with very specific educational and research objectives in mind,” said Ferrari. “As defense-based research institutions, I believe both sides see tremendous value in developing these kinds of international collaborations, capitalizing on the unique strengths of our respective institutions' students and faculty. This partnership is still young, but we have already seen some very rewarding results and I am confident that the value of this effort will only continue to build with time."