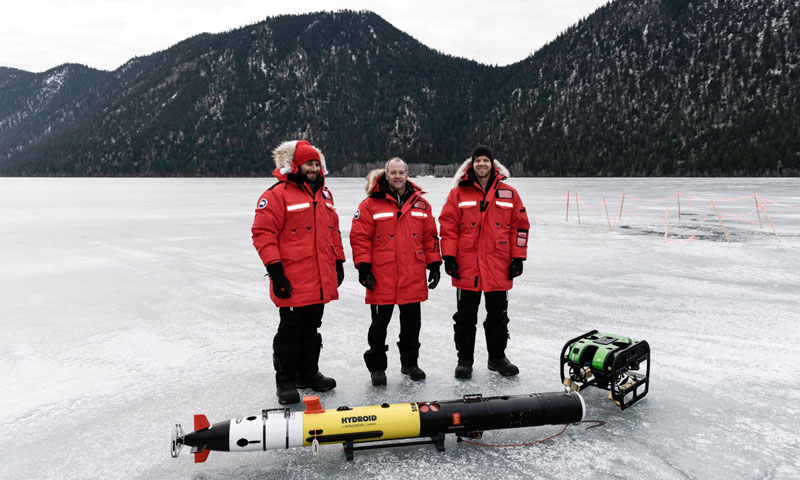 “The Navy is very interested in our ability to work under the ice using autonomous vehicles,” said Horner.

Pavilion Lake is located some 250 kilometers northeast of Vancouver, British Columbia. Its frozen-over waters became a natural laboratory in which Horner, Du Toit and a multi-disciplinary team of colleagues were able to test navigation algorithms developed at the NPS campus in Monterey, Calif. and beyond.

“The lake’s bathymetry is incredible. It varies from 60 to four meters depth in less than a 300 meter distance,” explained Horner. “It provided a unique opportunity for testing the AUV’s ability to collect sensor data while both avoiding potentially hazardous obstacles and building an accurate map.”

Horner and Du Toit both teach at the NPS Department of Mechanical and Aerospace Engineering (MAE). Horner is co-director at the university’s Center for Autonomous Vehicle Research (CAVR) and Du Toit has been participating for several years in NASA’s Extreme Environments Mission Operations (NEEMO) program. The researchers also partnered with NPS’ Consortium for Robotics and Unmanned Systems Education and Research, or CRUSER, which helped fund the Pavilion Lake experimentation.

While there are many facets to Horner and Du Toit’s combined experimentation efforts, at issue are three main capabilities – the development of navigational techniques that allow AUVs to travel without reliance on GPS; the development of adaptive controllers that will enable robust under-ice operations with changing vehicle configurations; and the development and testing of real-time surveying and 3D-mapping capabilities.

Horner and Du Toit also used their time at Pavilion Lake to gain experience conducting under-ice operations in preparation for further research at Lake Untersee, Antarctica later this year and in the Arctic next year.

“We are trying to do this in increasingly aggressive environments. We started in Pavilion Lake without ice, and now we have conducted experiments beneath the ice. Next, we intend to conduct experiments in a more challenging lake environment in Antarctica and culminate with AUVs deployed beneath moving sea ice in the Arctic,” Horner explained.

According to Du Toit and Horner, under-ice research is increasingly important to the Navy due to the effects of melting polar ice and its implications on geopolitical and economic interests in the region. But before the Navy is able to fully realize the benefits of their work beneath the ice, they must first get the science right. To do that, Horner and Du Toit will have to contend with not only extreme temperatures, and changing currents, but with moving sea ice and the physical effects of varying sea ice densities and compositions.

“All of our sensor measurements have to be integrated in a manner that makes sense mathematically,” said Du Toit. “The information comes in from a number of distinct places and has to be combined in a way that captures the relative quality of the information.” 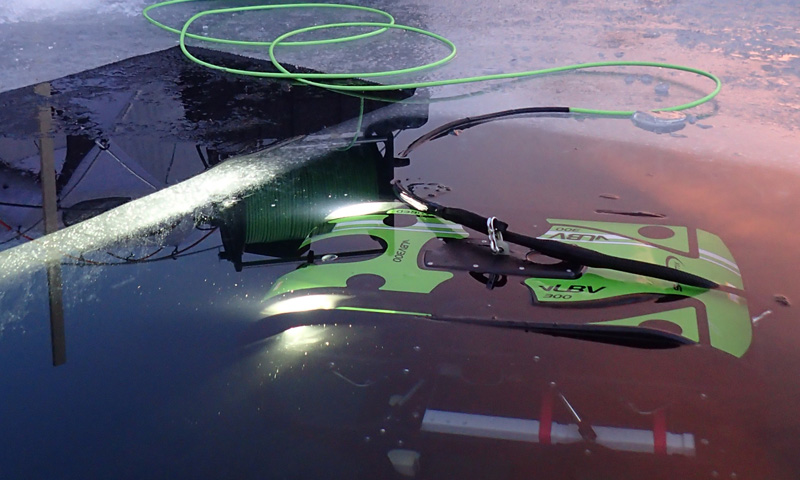 The Seabotix Remotely Operated Vehicle is pictured through a hole in the ice near Naval Postgraduate School Research Associate Professor Douglas Horner and Research Assistant Professor Noel Du Toit’s experimentation base atop the frozen waters of Pavilion Lake, British Columbia. Du Toit and Horner are conducting experiments on Autonomous Underwater Vehicle operations in extreme, under-ice environments. Their experimentation efforts have become increasing important to naval operations as melting polar ice continues to spur geopolitical and economic interests in the arctic.

Learn more about the NPS research team’s efforts with autonomous underwater vehicles (AUV) in extreme environments, catch up on recent press coverage, or watch videos from the research site.

One of the most important research outcomes that Horner and Du Toit hope to realize from their efforts is the ability to accurately and reliably navigate in a variety of challenging environments – from beneath the ice or in the cluttered littorals, the Navy has begun to navigate in these regions with greater frequency.

“Imagine the vehicle is moving around with a bubble of uncertainty around it. When GPS is available the bubble is small, but when it isn’t available or when we don’t want the vehicle to surface, the bubble can grow.  The bigger the bubble, the less confident we are about its actual location,” explained Horner. “We are interested in how terrain and natural underwater features can help us to manage the bubble and keep it to a minimal size.”

Using a process known as Terrain Aided Navigation (TAN), Horner and Du Toit are able to estimate their AUVs’ positions in relation to a map.

“But when you use a map one assumes it is correct even though accurate, high resolution undersea maps are frequently not available,” said Horner.

To overcome this challenge, Horner and Du Toit are developing techniques to build better maps with incomplete data. The methodology relies upon “optimal spatial estimation” to use available measurements to build maps and subsequently rely upon them to determine their AUV’s most likely position.

But what happens in the absence of accurate maps and the only terrain feature detectable is the ice itself?

“The eventual goal is to turn this capability “upside-down” and to use sonar and complementary sensors on the underside of the ice at the polar caps to reduce AUV positional uncertainty,” said Horner. “Before, we were looking downward at the [ocean floor] topology to match geographical features to a map, but in the arctic we do not have that luxury.”

“Your navigational goal is going to determine how you are going to use the map,” explained Du Toit.

For Du Toit, positional certainty is critical. He is focused upon creating high-fidelity 3D maps that can be used by robotic systems to not only maneuver under austere conditions, but to interact with the environment as well.

Du Toit’s work at Pavilion Lake built upon experiments he conducted last year at Florida International University’s Aquarius Habitat. There, in collaboration with NASA’s Johnson Space Center, Du Toit worked with the NEEMO program to investigate robot-assisted human exploration in challenging environments. He hopes that by enhancing AUV mapping and navigational capabilities, he will be able to improve diver safety by relegating dangerous tasks to AUVs altogether.

“The next piece is our ability to interact with the environment, for example to pick up and retrieve things,” said Du Toit. Such a capability will provide novel utility to the Navy in support of undersea operations, but requires underlying capabilities such as accurate mapping and precise vehicle control.

But while the development of new navigational and control technologies is the primary focus of Horner and Du Toit’s work, the use of AUV’s in these austere environments is also presenting them, and a group of astro and marine biologists from NASA Ames Research Center with the opportunity to observe some of the earliest known organisms in existence today.

“Pavilion Lake is home to a large population of freshwater microbialite structures that have been studied by NASA and CSA scientists,” said Du Toit.

Similar colonies of microbials are known to exist beneath the Antarctic ice covering lake Untersee. “The Antarctic microbial colonies are unique and have been isolated from the rest of the earth’s atmosphere since the last ice age,” explained Du Toit.

Fossils with similar structure point to the existence of microbials as early as 3.45 billion years ago in what was the Earth’s earliest biosphere. According to Du Toit, these Antarctic microbial colonies – which only receive sunlight a few months out of the year in a lake permanently covered with three meters of ice – help astrobiologists to identify the conditions under which life may exist elsewhere in the solar system, perhaps even within the enormous salt-water sea recently discovered by NASA beneath the Jovian moon, Ganymede.